"Global governance requires rules, because flexibility and goodwill alone cannot tackle the hardest shared problems. With multilateralism under attack, the narrow path ahead is to determine, on a case-by-case basis, the minimum requirements of effective collective action, and to forge agreement on reforms that fulfill these conditions."

Can Multilateralism Adapt?, Jean Pisani-Ferry.
International Political Trilemma applies to both monetary and fiscal policy dimension by making it impossible for modern societies to combine:


To my students at TCD and MIIS, these are familiar from the following summary charts: 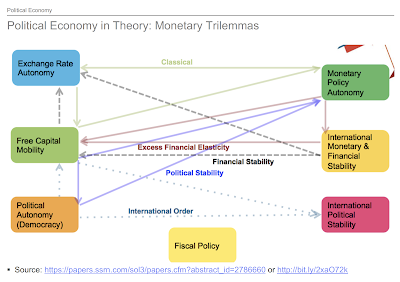 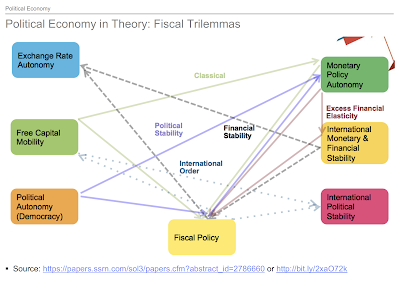 For more academically inclined readers, here is my paper summarising these Trilemmas and putting them into the context of the euro area harmonisation: Gurdgiev, Constantin, Euro After the Crisis: Key Challenges and Resolution Options (May 30, 2016). Prepared for: GUE/NGL Group, European Parliament, October 2015: https://ssrn.com/abstract=2786660.

It is, generally, not hard to find examples of the two trilemmas presence in a range of historical shocks in the past. More recent examples, however, are harder to come by due to time lags required to see these trilemmas in action. Pisani-Ferry's quote above hints at such.

During the 1990s, "After an eight-decade-long hiatus, the global economy was being reunified. Economic openness was the order of the day. ...The message was clear: globalization was not just about liberalizing flows of goods, services and capital but about establishing the rules and institutions required to steer markets, foster cooperation, and deliver global public goods."

As Pisano-Ferry argues, today, "Despite a decade of talks, the global trade negotiations launched in 2001 have gotten nowhere. The Internet has become fragmented and could break up further. Financial regionalism is on the rise. The global effort to combat climate change rests on a collection of non-binding agreements, from which the United States has withdrawn...  The very principles of multilateralism, a key pillar of global governance, seem to have become a relic from a distant past."

"...let’s face it: today’s problems did not start with Trump." In fact, the problems started with the above trilemmas. Or put differently, the problems are not an outrun of bad policies or choices, but the natural result of the impossibility of combining the conflicting policies objectives and institutions. "There is no shortage of explanations. An important one is that many participants in the international system are having second thoughts about globalization. A widespread perception in advanced countries is that the rents from technological innovation are being eroded precipitously... A second explanation is that the US strategy toward Russia and China has failed... neither Russia nor China has converged politically... Third, the US is unsure that a rules-based system offers the best framework to manage its rivalry with China. [and]... Finally, global rules look increasingly outdated. Whereas some of their underlying principles – starting with the simple idea that issues are addressed multilaterally rather than bilaterally – are as strong as ever, others were conceived for a world that no longer exists. Established trade negotiation practices make little sense in a world of global value chains and sophisticated services. And categorizing countries by their development level is losing its usefulness, given that some of them combine first-class global companies and pockets of economic backwardness."

In simple terms, the world became more complex and more fragile because we tried to make it less complex and more centralized (hegemonic positioning of the U.S. in Bretton Woods setting), while making it also more multilateral (through financial, economic, trade and human capital integration).

Pisano-Ferry offers a 50,000 feet level view on the solution to the problems: "the solution is neither to cultivate the nostalgia of yesterday’s order nor to place hope in loose, ineffective forms of international cooperation. International collective action requires rules... The narrow path ahead is to determine, on a case-by-case basis, the minimum requirements of effective collective action, and to forge agreement on reforms that fulfill these conditions." In other words, one cannot tackle trijemmas directly (correct view), but one can defuse them by limiting each node of the desired policies. E.g. less democracy here - to offset pressure from demographic of ageing, less capital mobility there - to reduce the speed of capital flows across the borders and lower volatility of financialized investment, less fiscal sovereignty - to provide better buffers for shocks arising in financial and economic systems, and less international institutions - to allow for more flexible rebalancing of monetary, trade and fiscal policies.

The problem with this is it requires for the hegemony (the U.S.) to put a hard stop to imposing its preferred solutions onto the rest of the world and international institutions. Or, put differently, the hegemony must stop being a hegemony. Good luck squaring that with American vision of the world a-la Rome 4.0.
A paper I recently cited in a research project for the European Parliament that is worth reading: "Trilemmas and Tradeoffs: Living with Financial Globalization" by Maurice Obstfeld. Some of my research on the matter, yet to be published (once the EU Parliament group clears it) is covered here: http://trueeconomics.blogspot.com/2016/01/19116-after-crisis-is-there-light-at.html and see slides 5-8 here: http://trueeconomics.blogspot.com/2015/09/17915-predict-conference-data-analytics.html. 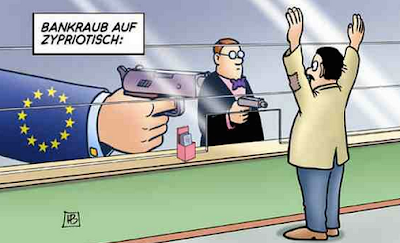