New stats for new dwelling completions in Ireland are out today and the reading press releases on the subject starts sounding like things are getting boomier. Year on year, single dwellings completions are up 15.5% in 2Q 2019, scheme units completions up 2.6%, apartments up 55.6% and all units numbers are up 11.8%. Happy times, as some would say. Alas, sayin ain't doin. And there is a lot of the latter left ahead. 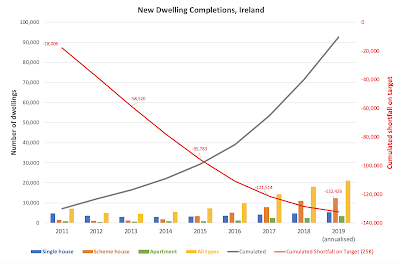 There are many ways for analysing the long-term trends in real estate prices. One way is to use dynamics for the periods when price appreciation was consistent with underlying economic growth fundamentals and project price levels forward at the rates, on average, compatible with these periods.

And some exercises in assessing Irish house prices relative to trend are starting to sound like an early alarm bell going off.

In Ireland's case, organic growth-based period of the Celtic Tiger can be traced to, roughly, 1992/1993 through 1998. In terms of real estate prices (housing), this period corresponds to the post-1987 recovery of 1988-1990, followed by a house price 'recession' of 1991-1993 and onto the period of recovery and economic growth-aligned appreciation of 1994-1996. During this period, average price inflation in Irish house prices was 3.94% per annum.

Using the data from 1970 through 2018 based on the time series from the BIS and CSO, we can compare current price indices to those that would have prevailed were the 1988-1996 trend growth to continue through 2018. Chart below shows the results: 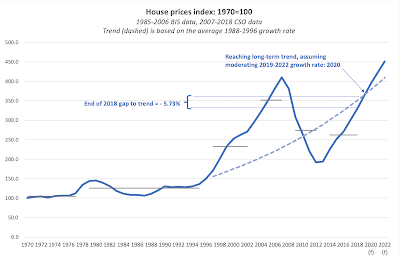 Of course, a warning is due: this exercise is just one of many way to assess longer term sustainability trends in house price dynamics.
For example, historical average rate of growth in house prices across 24 countries reported by BIS for 1970-2006 period is 2.34 percent per annum. Were we to take this rate of growth from 1998 through 2018 as the longer term trend indicator, Irish house prices would stand 32.7 percent above the long-run trend levels in 2018, implying that
Numbers are not simple. But numbers are starting to warrant some concerns.
A recent note from Brookings on the nature of the ongoing housing crisis in America has opened up with a bombastic statement:
"Over the past five years, median housing prices have risen faster than median incomes (Figure 1). While that’s generally good news for homeowners, it puts additional pressure on renters. Because renters generally earn lower incomes than homeowners, rising housing costs have regressive wealth implications."
(Source: https://www.brookings.edu/blog/up-front/2019/05/02/your-city-has-a-housing-crisis-the-answer-is-more-less-building-money-regulation/)
It sounds plausible. And it sounds easy enough to understand for politicos of all hues to take up the claim and run with it. There is is even a handy chart to illustrate the argument: 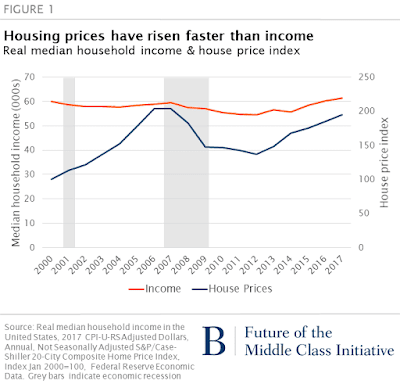 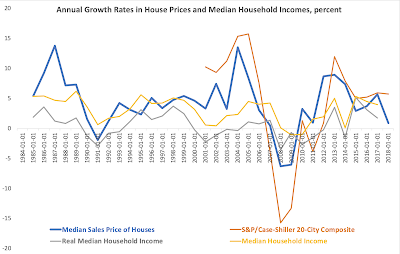 Historical averages are, respectively, -3.71 percent and -1.31 percent. Across the last Quantitative Easing cycle, -2.94 percent and -1.60%, ex-QE cycle, -4.05% and -1.19%.
So what does the above tell us? Things are not as dramatic, using nationwide house prices, than the Brookings claim makes it sound, and, more importantly, there is no evidence of a significant departure in the current QE cycle from the past experiences. When it comes to property prices, hoses inflation seems to be much less divorced from real and nominal income growth rates in the last four years (the recovery period post-Great Recession) than in the periods prior to the GFC.
Some of the readers of this blog have been asking me to revisit (as I used to do more regularly in the past) the analysis of Irish property prices in relation to the ‘sustainability trend’. With updated CSO data on RPPI, here is the outrun.
The charts below show current National and Dublin property price indices in relation to the trends computed on the basis of the following CORE assumptions: 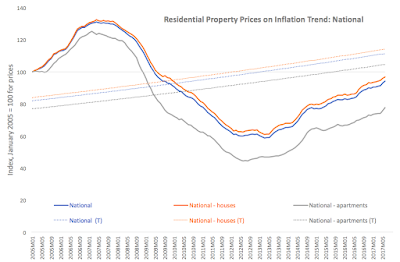 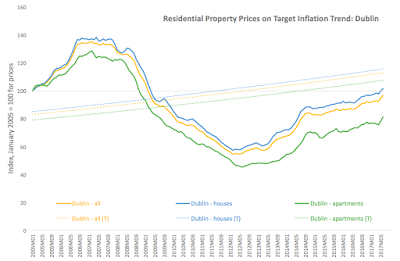 Charts above use the following SPECIFIC trend assumptions:
In all cases, current markets valuations are well below the long-term sustainability target and there is significant room for further appreciation relative to these trends (see details of target under-shooting in the summary table below). 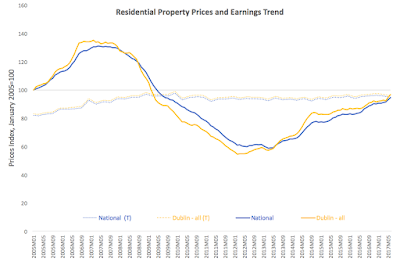 Chart above shows tow series sustainability targets computed on the basis of different specific assumptions, while retaining same core assumptions:
Using only weekly earnings evolution over January 2005-present, as shown in the above chart, both Dublin and National house prices are currently statistically at the levels matching sustainability criteria. There is no statistical overshooting of the sustainability bounds, yet. Chart above again modifies specific assumptions, while retaining the same core assumptions. Specifically:
As the chart above clearly shows, both National and Dublin property markets are still well underpriced compared to the long term sustainability targets, defined based on a combination of earnings and interest rates. Note: correcting this chart for evolution of unemployment brings sustainability benchmarks roughly half of the way closer to current prices, but does not fully erase the gap.
Summary table below:

So, overall, the above exercise - imperfect as it may be - suggests no evidence of excessive pricing in Irish residential property at this point in time. There are many caveats that apply, of course. Some important ones: I do not account for higher taxes; and I do not factor in difficulties in obtaining mortgages. These are material, but I am not sure they are material enough to bring the above gaps to zero or to trigger overpricing. Most likely, the national residential prices are somewhere around 5-7 percent below their sustainability bounds, while Dublin prices are around 7-10 percent below these bounds. Which means we have a short window of time to bring the markets to the sustainable price dynamics path by dramatically altering supply dynamics in the property sector. A window of 12-18 months, by my estimates.
Ireland has spent tens of billions to prop up schemes, like Nama and IBRC. These organisations pursued developers with a sole purpose: to bring them down, irrespective of the optimal return strategy from the taxpayers perspective and regardless of optimal recovery strategies for asset recovery. We know as much because we have plenty of evidence - that runs contrary to Nama and IBRC relentless push for secrecy on their assets sales - that value has been destroyed during their workout and asset sales phases. We know as much, because leaders of Nama have gone on the record claiming that developers are, effectively speculators, 'good for nothing else, but attending Galway races', and add no value to construction projects. 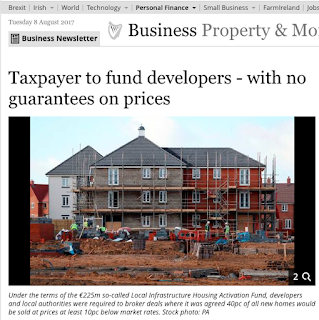