In the context of 2016 Budget, Russian sovereign reserves dynamics are clearly an important consideration. For example, in his recent statement, former Russian Finance Minister, Kudrin, has suggested that if Budget deficit reaches above 5% of GDP in 2016, the entire cushion of liquid foreign reserves held by the Government will be exhausted by the end of the year, leaving Russia exposed to big cuts in the budget for 2017. This is similar to the positions of Russia's Economy Minister Alexei Ulyukayev and the current Finance Minister Anton Siluanov.

The expectations are based on three considerations:
1) 2015 dynamics of Russian sovereign wealth funds;
2) Funds outflows expected under the external debt repayment schedules; and
3) A potentially massive call on Russian reserves from the VEB capital requirements.

I covered the last point earlier here. So let’s take a look at the first point.

Russia’s main and more liquid Reserve Fund shrank substantially last year as it carried out its explicit mandate to provide support for fiscal balance. Set up in 2008, the fund holds only liquid foreign assets and 2015 became the first year since the Great Recession and the Global Financial Crisis (2009-2010 in Russia’s case) when it experienced net withdrawals. The value of the fund fell from roughly USD90 billion to ca USD50 billion by the end of December 2015.

However, the key to these holdings is their Ruble equivalent, as Russian budgetary expenditures are in domestic currency. By this metric, the Fund has been doing somewhat better. By end of December 2015, the Reserve Fund held assets valued at RUB3.6 trillion, amounting to almost 5 percent of Russian GDP or roughly 1.7 times Budget 2016 requirement for deficit coverage. Budget 2016 is based on expectation that the Reserve Fund will supply some RUB2.1 trillion to cover the deficit.

The sticking point is that Budget 2016 - in its current reincarnation - is based on oil price of USD50pb. The Ministry of Finance is currently preparing amended Budget based on USD30-35pb price of Brent, but we are yet to see the resulting deficits projections. What we do know is that the Government has requested up to 10 percent cuts across public expenditure for 2016. Absent such cuts, and if oil prices remain around USD30pb mark, the deficit is likely to balloon to the levels where 2016 deficit will end up fully depleting the Reserve Fund.

Added safety cushion, of course, will be provided by devaluation of the Ruble. This worked pretty well in 2015, but the problem going into 2016 is that required further devaluations will likely bring Ruble into USDRUB 90+ range, inducing severe redistribution of losses onto the shoulders of consumers and cutting hard into companies investment in new equipment and technologies. 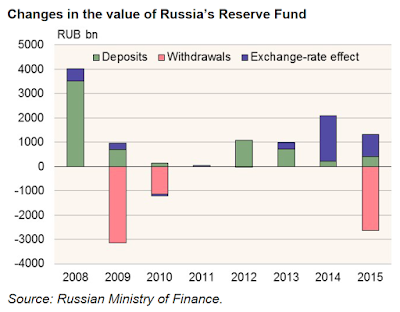 Aside from the Reserve Fund, Russia also has the National Welfare Fund which was set up to underwrite public pensions. The Fund has been used to provide capital and funding to Russian banks shut out of the international borrowing in form of bonds purchases and deposits with the banks, as well as to some Russian companies, in form of debt purchases. These deposits and loans, however, are not liquid and, therefore, not available for fiscal supports. About only hope for some liquidity extraction from these allocations is via Russian corporates using cash flows from exports to repay the Fund - something that is unlikely to create significant buffers for the Budget.

At the end of 2015, the National Welfare Fund held assets valued at USD72 billion, of which USD48 billion (or RUB3.5 trillion) was held in relatively liquid foreign-currency assets and the balance held in assets written against domestic systemically important banks and companies. Even assuming - optimistically - that 10 percent of the residual assets can be cashed in over 2016, the liquidity available from the Fund runs to around USD50 billion.

Thus, total liquidity cushion held by two Russian SWFs currently amounts to USD100 billion without adjusting for liquidity risks and costs, and if we are to take nominal adjustments for these two factors, liquidity cushion probably falls to USD75-80 billion total.

It is worth noting, however, that Russia has other international reserves at its disposal. Per official data, as of the ned of December 2015, total International Reserves stood at USD368.4 billion, down USD17.06 billion on December 2014 and down USD222.17 billion on all time peak. In accessible reserves, Russia has International funds (excluding SDRs and IMF reserves) of USD363.07 billion. 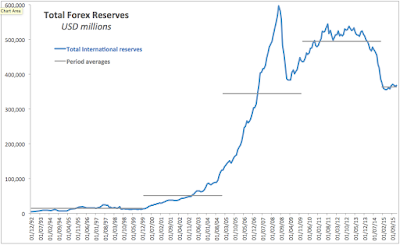 I will be covering funds outflows schedule for 2016 in a separate post, so stay tuned.