In previous post, I covered the drawdowns on Russian SWFs over 2015. As promised, here is the capital outflows / debt redemptions part of the equation.

The latest data for changes in the composition of External Debt of the Russian Federation that we have dates back to the end of 2Q 2015. We also have projections of maturities of debt forward, allowing us to estimate - based on schedule - debt redemptions through 4Q 2015. Chart below illustrates the trend. 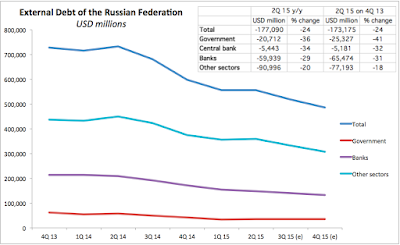 As shown in the chart above, based on estimated schedule of repayments, by the end of 2015, Russia total external debt has declined by some USD177.1 billion or 24 percent. Some of this was converted into equity and domestic debt, and some (3Q-4Q maturities) would have been rolled over. Still, that is a sizeable chunk of external debt gone - a very rapid rate of economy’s deleveraging.

Compositionally, a bulk of this came from the ‘Other Sectors’, but in percentage terms, the largest decline has been in the General Government category, where the decline y/y was 36 percent.

Looking at forward schedule of maturities, the following chart highlights the overall trend decline in debt redemptions coming forward in 2016 and into 2Q 2017. 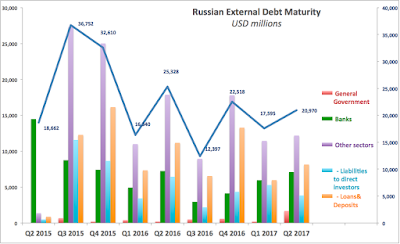 The total quantum of debt due to mature in 2016 is USD76.58 billion, of which Government debt maturing amounts to just 1.7 billion, banks debts maturing account for USD19.27 billion and the balance is due to mature for ‘Other Sectors’.

These are aggregates, so they include debt owed to parent entities, debt owed to direct investors, debt convertible into equity, debt written by banks affiliated with corporates, etc. In other words, a large chunk of this debt is not really under any pressure of repayment. General estimates put such debt at around 20-25 percent of the total debt due in the Banking and Other sectors. If we take a partial adjustment for this, netting out ‘Other Sectors’ external debt held by Investment enterprises and in form of Trade Credit and Financial Leases, etc, then total debt maturing in 2016 per schedule falls to, roughly, USD 59.5 billion - well shy of the aggregate total officially reported as USD 76.58 billion.


So in a summary: Russian deleveraging continued strongly in 2015 and will be ongoing still in 2016. 2016 levels of debt redemptions across all sectors of the economy are shallower than in 2015. Although this rate of deleveraging does present significant challenges to the economy from the point of view of funds available for investment and to support operations, overall deleveraging process is, in effect, itself an investment into future capacity of companies and banks to raise funding. The main impediment to the re-starting of this process, however, is the geopolitical environment of sanctions against Russian banks that de facto closed access to external funding for the vast majority of sanctioned and non-sanctioned enterprises and banks.


Next, I will be covering Russian capital outflows, so stay tuned of that.