My latest article on Irish banking sector problems with distressed mortgages is out today in The Currency:

There’s a new mortgage arrears crisis on its way, and official Ireland is not ready for it

The Central Bank of Ireland has started publishing new data on mortgage arrears – and the news is not good. An arrears crisis is brewing. The banks, and the state, are woefully unprepared for it. 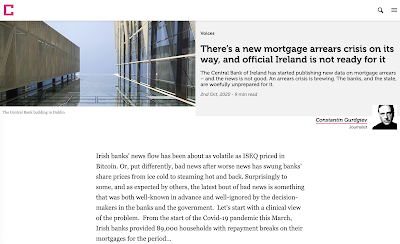 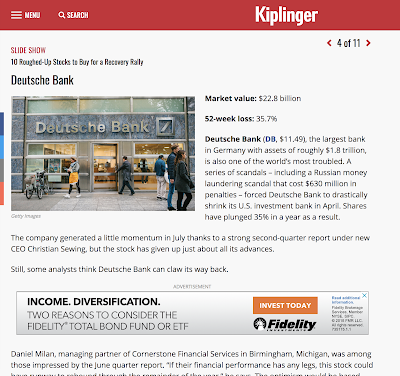 Euromoney article on the latent Italian crisis, relative to the ongoing Turkish one: https://www.euromoney.com/article/b19k3zjb7v811r/italian-banks-a-bigger-risk-than-turkey. 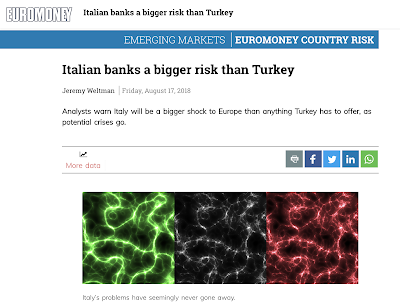 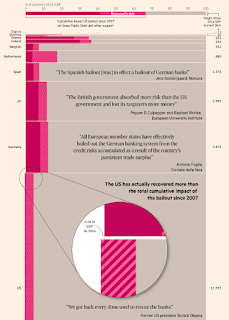 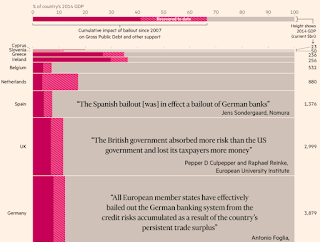 
Since the start of the Global Financial Crisis back in 2008, European and U.S. policymakers and regulators have consistently pointed their fingers at the international banking system as a key source of systemic risks and abuses. Equally consistently, international and domestic regulatory and supervisory authorities have embarked on designing and implementing system-wide responses to the causes of the crisis. What emerged from these efforts can be described as a boom-town explosion of regulatory authorities. Regulatory,  supervisory and compliance jobs mushroomed, turning legal and compliance departments into a new Klondike, mining the rich veins of various regulations, frameworks and institutions. All of this activity, the promise held, was being built to address the causes of the recent crisis and create systems that can robustly prevent future financial meltdowns.

At the forefront of these global reforms are the EU and the U.S. These jurisdictions took two distinctly different approaches to beefing up their respective responses to the systemic crises. Yet, the outrun of the reforms is the same, no matter what strategy was selected to structure them.

The U.S. has adopted a reforms path focused on re-structuring of the banks – with 2010 Dodd-Frank Act being the cornerstone of these changes. The capital adequacy rules closely followed the Basel Committee which sets these for the global banking sector. The U.S. regulators have been pushing Basel to create a common "floor" or level of capital a bank cannot go below. Under the U.S. proposals, the “floor” will apply irrespective of its internal risk calculations, reducing banks’ and national regulators’ ability to game the system, while still claiming the banks remain well-capitalised. Beyond that, the U.S. regulatory reforms primarily aimed to strengthen the enforcement arm of the banking supervision regime. Enforcement actions have been coming quick and dense ever since the ‘recovery’ set in in 2010.

Meanwhile, the EU has gone about the business of rebuilding its financial markets in a traditional, European, way. Any reform momentum became an excuse to create more bureaucratese and to engineer ever more elaborate, Byzantine, technocratic schemes in hope that somehow, the uncertainties created by the skewed business models of banks get entangled in a web of paperwork, making the crises if not impossible, at least impenetrable to the ordinary punters. Over the last 8 years, Europe created a truly shocking patchwork of various ‘unions’, directives, authorities and boards – all designed to make the already heavily centralised system of banking regulations even more complex.

The sheer absurdity of the European regulatory epicycles is daunting.

Eight years of solemn promises by bureaucrats and governments on both sides of the Atlantic to end the egregious abuses of risk management, business practices and customer trust in the American and European banking should have produced at least some results when it comes to cutting the flow of banking scandals and mini-crises. Alas, as the recent events illustrate, nothing can be further from the truth than such a hypothesis.

In the Land of the Free [from individual responsibility], American bankers are wrecking havoc on customers and investors. The latest instalment in the saga is the largest retail bank in the North America, Wells Fargo.

But Wells Fargo is just the tip of an iceberg.

In July 2015, Citibank settled with CFPB over charges it deceptively mis-sold credit products to 2.2 million of its own customers. The settlement was magnitudes greater than that of the Wells Fargo, at $700 million. And in May 2015, Citicorp, the parent company that controls Citibank, pleaded guilty to a felony manipulation of foreign currency markets – a charge brought against it by the Justice Department. Citicorp was accompanied in the plea by another U.S. banking behemoth, JPMorgan Chase. You heard it right: two of the largest U.S. banks are felons.

And there is a third one about to join them. This month, news broke that Morgan Stanley was charged with "dishonest and unethical conduct" in Massachusetts' securities “for urging brokers to sell loans to their clients”.

Based on just a snapshot of the larger cases involving Citi, the bank and its parent company have faced fines and settlements costs in excess of $19 billion between the start of 2002 and the end of 2015. Today, the CFPB has over 29,000 consumer complaints against Citi, and 37,000 complaints against JP Morgan Chase outstanding.

To remind you, Citi was the largest recipient of the U.S. Fed bailout package in the wake of the 2008 Global Financial Crisis, with heavily subsidised loans to the bank totalling $2.7 trillion or roughly 16 percent of the entire bailout programme in the U.S.

But there have been no prosecutions of the Citi, JP Morgan Chase or Wells Fargo executives in the works.

The lavishness of the state protection extended to some of the most egregiously abusive banking institutions is matched by another serial abuser of rules of the markets: the Deutsche Bank. Like Citi, the German giant received heaps of cash from the U.S. authorities.

Based on U.S. Government Accountability Office (GAO) data, during the 2008-2010 crisis, Deutsche was provided with $354 billion worth of emergency financial assistance from the U.S. authorities. In contrast, Lehman Brothers got only $183 billion.

Last month, Deutsche entered into the talks with the U.S. Department of Justice over the settlement for mis-selling mortgage backed securities. The original fine was set at $14 billion – a levy that would effectively wipe out capital reserves cushion in Europe’s largest bank. The latest financial markets rumours are putting the final settlement closer to $5.4-6 billion, still close to one third of the bank’s equity value. To put these figures into perspective, Europe’s Single Resolution Board fund, designed to be the last line of defence against taxpayers bailouts, currently holds only $11 billion in reserves.

The Department of Justice demand blew wide open Deutsche troubled operations. In highly simplified terms, the entire business model of the bank resembles a house of cards. Deutsche problems can be divided into 3 categories: legal, capital, and leverage risks.

On legal fronts, the bank has already paid out some $9 billion worth of fines and settlements between 2008 and 2015. At the start of this year, the bank was yet to achieve resolution of the probe into currency markets manipulation with the Department of Justice. Deutsche is also defending itself (along with 16 other financial institutions) in a massive law suit by pension funds and other investors. There are on-going probes in the U.S. and the UK concerning its role in channelling some USD10 billion of potentially illegal Russian money into the West. Department of Justice is also after the bank in relation to the alleged malfeasance in trading in the U.S. Treasury market.

And in April 2016, the German TBTF (Too-Big-To-Fail) goliath settled a series of U.S. lawsuits over allegations it manipulated gold and silver prices. The settlement amount was not disclosed, but manipulations involved tens of billions of dollars.

Courtesy of the numerous global scandals, two years ago, Deutsche was placed on the “enhanced supervision” list by the UK regulators – a list, reserved for banks that have either gone through a systemic failure or are at a risk of such. This list includes no other large banking institution, save for Deutsche. As reported by Reuters, citing the Financial Times, in May this year, UK’s financial regulatory authority stated, as recently as this year, that “Deutsche Bank has "serious" and "systemic" failings in its controls against money laundering, terrorist financing and sanctions”.

As if this was not enough, last month, a group of senior Deutsche ex-employees were charged in Milan “for colluding to falsify the accounts of Italy’s third-biggest bank, Banca Monte dei Paschi di Siena SpA” (BMPS) as reported by Bloomberg. Of course, BMPS is itself in the need of a government bailout, with bank haemorrhaging capital over recent years and nursing a mountain of bad loans. One of the world’s oldest banks, the Italian ‘systemically important’ lender has been teetering on the verge of insolvency since 2008-2009.

All in, at the end of August 2016, Deutsche Bank had some 7,000 law suits to deal with, according to the Financial Times.

Beyond legal problems, Deutsche is sitting on a capital structure that includes billions of notorious CoCos – Contingent Convertible Capital Instruments. These are a hybrid form of capital instruments designed and structured to absorb losses in times of stress by automatically converting into equity. In short, CoCos are bizarre hybrids favoured by European banks, including Irish ‘pillar’ banks, as a dressing for capital buffers. They appease European regulators and, in theory, provide a cushion of protection for depositors. In reality, CoCos hide complex risks and can act as destabilising elements of banks balancesheets.

And Deutsche’s balancesheet is loaded with trillions worth of opaque and hard-to-value derivatives. At of the end of 2015, the bank held estimated EUR1.4 trillion exposure to these instruments in official accounts. A full third of bank’s assets is composed of derivatives and ‘other’ exposures, with ‘other’ serving as a financial euphemism for anything other than blue chip safe investments. 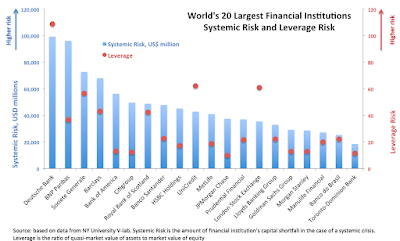 Eight years after the blow up of the global financial system we have hundreds of tomes of reforms legislation and rule books thrown onto the crumbling façade of the global banking system. Tens of trillions of dollars in liquidity and lending supports have been pumped into the banks and financial markets. And there are never-ending calls from the Left and the Right of the political spectrum for more Government solutions to the banking problems.

Still, the American and European banking models show little real change brought about by the crisis. Both, the discipline of the banks boards and the strategy pursued by the banks toward rebuilding their profits remain unaltered by the lessons from the crisis. The fireworks of political demagoguery over the need to change the banking to fit the demands of the 21st century roll on. Election after election, candidates compete against each other in promising a regulatory nirvana of de-risked banking. And time after time, as smoke of elections clears away, we witness the same system producing gross neglect for risks, disregard for its customers under the implicit assumption that, if things get shaky again, taxpayers’ cash will come raining on the fires threatening the too-big-to-reform banking giants. 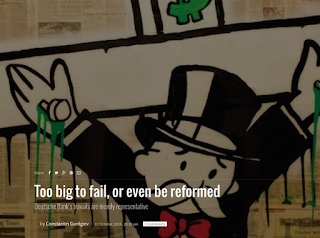