Dealogic M&A Statshot for the end of December 2015 showed that global M&A volumes have increased for third year running, reaching USD5.03 trillion in 2015 through mid-December. Previous record, set in 2007, was USD4.6 trillion. 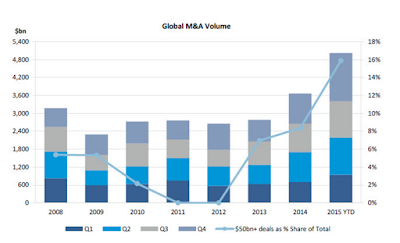 The hype of M&As as the form of ‘investment’ in a sales-less world (see here http://trueeconomics.blogspot.com/2016/02/9216-sales-and-capex-weaknesses-are-bad.html) is raging on and the big boys are all out with big wads of cash. Problem is:


The former, however, is trouble for investors, not management. The latter two are trouble for us, mere mortals, who want well-paying jobs. which brings us about to 'What's next?' question.

Given lack of organic revenue growth and profitability margins improvements, and given tightening of the corporate credit markets, one might assume that M&As craze will abate in 2016. Indeed, that would be rational. But I would not start banking on M&A slowdown returning companies to real capital spending. All surplus cash available for investment ex-amortisation and depreciation and ex-investment immediately anchored to demand growth (not opportunity-creating investment) will still go to M&As and share support schemes. And larger corporates, still able to tap credit markets, will continue racing to the top of the big deals. So moderation in M&As will likely be not as sharp as moderation in corporate lending, unless, of course, all the hell breaks loose in the risk markets.