My comment on the Germany's "Sages" proposal for sovereign bonds bail-ins rule for Portugal's Expresso: http://expresso.sapo.pt/economia/2016-02-16-Risco-de-um-ataque-especulativo-as-dividas-dos-perifericos. 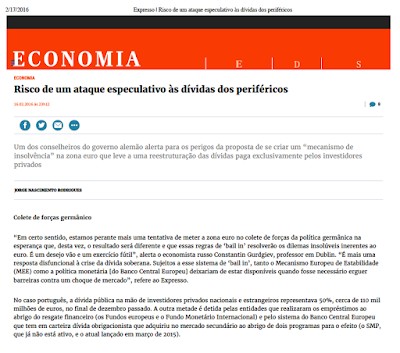 The proposed 'sovereign bail-in' mechanism represents another dysfunctional response to the sovereign debt crisis in the Euro area. The mechanism de facto exposes sovereigns locked in a currency union to the full extent of monetary and fiscal risks that reside outside their control, while reinforcing the risks arising from their inability to control their own monetary policies.

Under the current system, a run on the sovereign debt in the markets for any individual state can be backstopped via ESM as a lender of last resort. In a normally functioning currency union, such a run can be backstopped also via monetary policy and fiscal mechanisms.

In contrast, within the proposed bail-in system, both the ESM and the monetary policy become unavailable when it comes to securing a backstop against a market shock. The full extent of a run on Government bond for a member state will befall the fiscal authorities of the member state - aka the taxpayers who will end up paying for bonds bail-ins through higher yields of Government debt and fiscal squeeze on expenditure and taxation.

In theory, a bail-in mechanism for sovereign debt can be implemented in the presence of three key conditions:

In a sense, we are witnessing another attempt to put Euro area into a Germanic policy straightjacket in a hope that this time around, the outcome will be different and that bail-ins rules will fix the unresolvable dilemmas inherent in the Euro design. It is a vain hope and a futile exercise that is creating more risks in exchange for no tangible gain.