Back in 2008, when the Irish markets were tanking, one of the managing partners in a large Irish stock brokerage issued an infamous research note, telling clients that while things were bad, things will be good again.  The main point of the note was that "markets do come back" no matter what.

As evidence of such "comebacks", the author of the note offered an anecdote of his relative trying to sell property prior to the onset of the Asian Financial Crisis at the end of the 1999. The sale, having fallen through due to the crisis hitting hard, was completed at 2/3rds of the original offered price some 8 years ago. This was the analyst's evidence for the 'inevitability of recovery'.

Back at the time the note was issued, I pointed out to the said analyst that he missed a major problem: inflation. By the time his relative did conclude the sale, the price he/she got for the property was down 80% or more, not 33%, because 8 years of inflation chewed through his/her returns.

Ever since then, I have been tracking (occasionally - usually once a year) Irish stock exchange broadest index, ISEQ, for the signs that "markets do come back". Here is the latest update: we are still waiting for when they "come back". 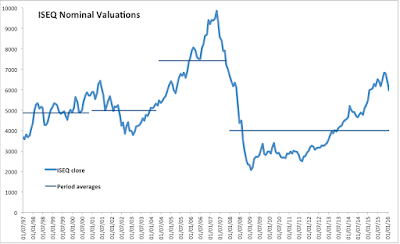 Even though ISEQ no longer contains the hardest hit, by the crisis, equities - a little cheat trick used by Irish Stuffbrokers to sell ISEQ 'returns' is never correcting them for survivourship bias, but let us indulge them on this - ISEQ is still massively below pre-crisis peak. It has not 'come back', but instead, on its peak-to-trough way, in nominal terms, it was falling 972.6 points per month on average and on its 'coming back' way from the trough it has been averaging gains of just 46.2 points per month. Which means the market drop rate was 20 times faster than the market's 'coming back' rate. 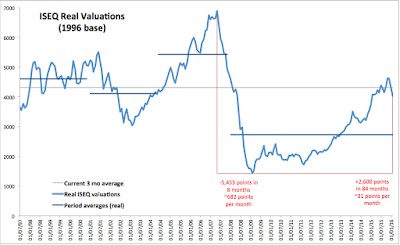 The freak show of Irish stocks is self-evidently not in a rude health. The 'coming back' of the Irish markets is so bad, that if you invested in them during October 1997-December 1999 period, today you would have lost, on average 10% of your investment, and if you invested in ISEQ back in 1Q 1998, you would be down 15.8% once inflation is factored in.

Worse, compared to pre-crisis peak, we are nowhere near that 'come back' territory, some 8 years and 9 months after reaching the peak, the index is still 41.4% down in real terms. Current level (using last 3 months average) of the index is below all period averages for the index, save for the period of post-dot.com crash, but using latest ISEQ reading (instead of a 3mo average), the market now is below even that abysmal period average.

Thus, overall, at current position, ISEQ offers us not the lesson of a market that "comes back", but a market that goes nowhere over the last 18 years. And that, folks, is the combined power of inflation and nonsense that is Irish Stuffbrokerage research... err... marketing.