You might excuse an average punter for thinking things are going the beleaguered Irish Health Services ways with some EUR500 ml added to the spending bin (http://www.thetimes.co.uk/article/eu-ruling-means-extra-540m-for-health-fbpnqcqb8?shareToken=699206929a359223e8662e8ae88a18d2). After all, even the good folks of The Times bought into the positive story. 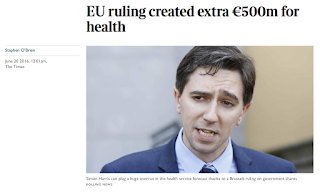 But, such a conjecture is wrong. What really is happening, thus? In simple terms, the Eurostat reclassification of the Government conversion of AIB preference shares into ordinary shares generates several implications:

In simple terms, there is no free lunch. Irish State does not have extra EUR500 million floating around that it did not have before. No matter what you classify things as, basic accounting means: unless you got paid by someone EUR500 million, you have to borrow EUR 500 million in order to spend it.

Simples. But not for Irish media that keeps confusing deficit financing via debt for resources.
This is an unedited version of my column for Village Magazine, December 2015. 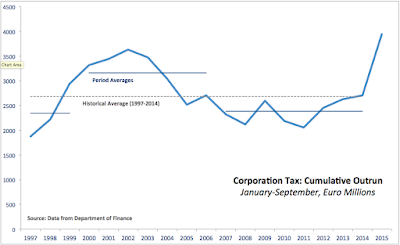 Source: Data from Department of Finance
This prompted the by-now-famous letter from the outgoing Governor of the Central Bank, Professor Patrick Honohan to the Minister for Finance in which Professor Honohan politely, almost academically, warned the Government that a large share of the current growth in the economy is accounted for by the “distorting features” – a euphemism for tax optimising accounting. Per letter, “Neglecting these measurement issues has led some commentators to think that the economy is back to pre-crisis performance”.
Professor Honohan’s warning reflects the breakdown in sources of growth noted earlier, with booming multinationals’ activity outpacing domestic economic expansion. The same is confirmed by the recent data from labour markets. For example, whilst official unemployment in Ireland has been declining over the recent years, labour force participation rates have remained well below pre-crisis averages and are currently stuck at the crisis period lows.  In simple terms, until very recently, jobs creation in Ireland has been heavily concentrated in a handful of sectors and professional categories.
Of course, this column has been saying the same for months now, but for Irish official media, the voice of titled authority is always worth waiting for.
The Revenue attempted to explain the Exchequer trends through October, but the effort was half-hearted. Per Revenue, the UER800 million breakdown of Corporation Tax receipts outperformance relative to target can be broken into EUR350 million of the “unexpected” payments; EUR200 million to “early” payments; and EUR200 million to ‘delayed’ repayments. Which prompted a conclusion that the surge in tax receipts was “sustainable”.
Turning back to fiscal management side of accounts, Irish debt servicing costs at end of 3Q 2015 fell EUR296 million or 5.9 percent compared to January-September 2014. The key driver of this improvement was refinancing of the IMF loans via market borrowings and, of course, the ECB-driven decline in bond yields. Neither are linked to anything the Government did.
Spurred by improving revenue side, however, the Government did open up its purse. Spending on current goods and services (excluding capital investment and interest on debt) has managed to account for just under one tenth of the overall official economic growth in the first half of 2015. In other words, even before the Budget 2016 was penned and the print of improved revenues was visible on the horizon, Irish austerity has turned into business-as-usual.
Talking up the future
As the result of the tangible – albeit more modest than official GDP figures suggest – economic recovery, Budget 2016 unveiled this month marked a large scale U-turn on years of spending cuts and tax hikes.  Even though the Government deficit is still running at 2.1 percent of GDP and is forecast to be 1.2 percent of GDP in 2016, the Government has approved a package of tax cuts and current spending increases worth at least EUR3 billion next year. The old formula of ‘If I have it I spend it’ is now replaced by the formula of ‘If I can borrow it I spend it’.
Which means that in 2016, Ireland will run pro-cyclical fiscal policy for the second year in a row, breaking a short period of  more sustainable approach to fiscal management. Another point of concern is the fact that this time around, just as in 2004-2007, expansionary budgeting is coming on foot of what appears to be one-off or short-term boost to Exchequer revenues. Finally, looking at the composition of Irish Government spending plans, both capital and current spending sides of the Budget and the multi-annual public investment framework include steep increases in spending allocations of questionable quality, including projects that potentially constitute political white elephants and electioneering.
In short, the Celtic Tiger is coming back. Both – the better side of it and the worst.