Since being sworn in as President of the United States, Donald Trump has devoted considerable energy to reversing many of his predecessor in office Barack Obama's actions.

But perhaps the most surprising reversal might come from undoing a January 2013 action by President Obama to reject a popular petition for the U.S. to build a working Death Star. For an administration seeking to expand the military capabilities of the United States, where the President has proposed creating a "space force", the Trump White House might soon revisit what would be the nation's largest ever defense infrastructure construction project.

Advances in production technology and fabrication methods for space-based structures stand to make the project much more feasible and cost effective than in President Obama's day, as the following video demonstrating how a Death Star could be practically manufactured demonstrates (HT: Core77):

Timelapse of Death Star Construction from Outside Hollywood on Vimeo.

It's really not that much different from assembling an International Space Station. And it would certainly be a lot easier to see from the ground. For a nation whose private sector can launch a Tesla into space, how hard can it be for the government to do?

Yes, the second video is real!

The production team behind the Blade Runner 2049 movie opening in theaters today had a lot of creative energy to spare. So much so that they put together three shorts to explain what major events happened from the end of the original Blade Runner, which was set in the Los Angeles of 2019, and the beginning of the new motion picture.

The first short, at least in chronological order if not the order the shorts were released, features the animation work of Shinichiro Watanabe, who is perhaps best known for the Cowboy Bebop anime series, starts the ball rolling for what happened to Los Angeles - Blade Runner Black Out 2022:

Where was this movie all summer long?

Several weeks ago, we compared the box office performance of the movie Deadpool against its eight 2015 Best Picture Academy Award-nominated peers. Back then, we found that the scrappy Deadpool beat all eight films through its first week of release.

Today, we're producing the sequel to that original story, where this time, we find that the eight Best Picture nominees of 2015 have struck back, taking the cumulative box office crown away from 2016's Deadpool. 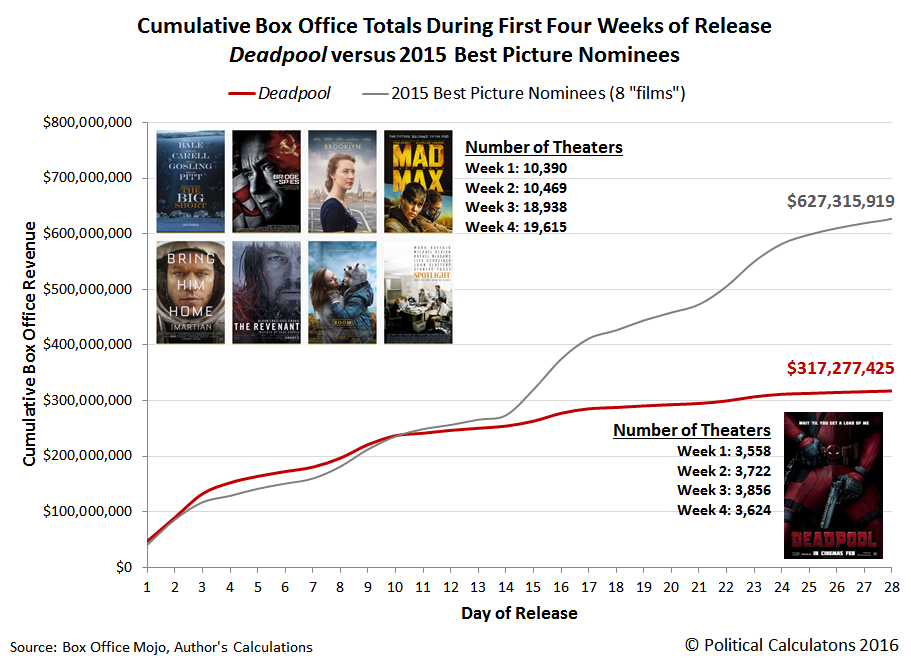 It really shouldn't be a surprise, but you should always expect that eight movies, even 2015's Best Picture nominees, will combine to make more money at the box office than just one movie.

The real story here is how the eight 2015 Best Picture nominees did it. Basically, they added another 8,400 theaters in their third week of release to their previous week's total of 10,487, dwarfing the peak of 3,836 for Deadpool by nearly a factor of 5.

And then, in their fourth week of release, they added another 566.

It was like one of those cliché fight scenes in a superhero movie where the evil league of supervillains start fighting really dirty by ordering their henchmen to "sic 'em" in the hopes of overwhelming their greatly outnumbered foe.

But what if the odds were equalized? What if we calculated the average gross per theater for each day of release for all these movies, and then compared their box office prowess, mano a mano?

Here's the chart showing the results of that daily calculation for the first four weeks of release for Deadpool and the eight 2015 Best Picture nominees. 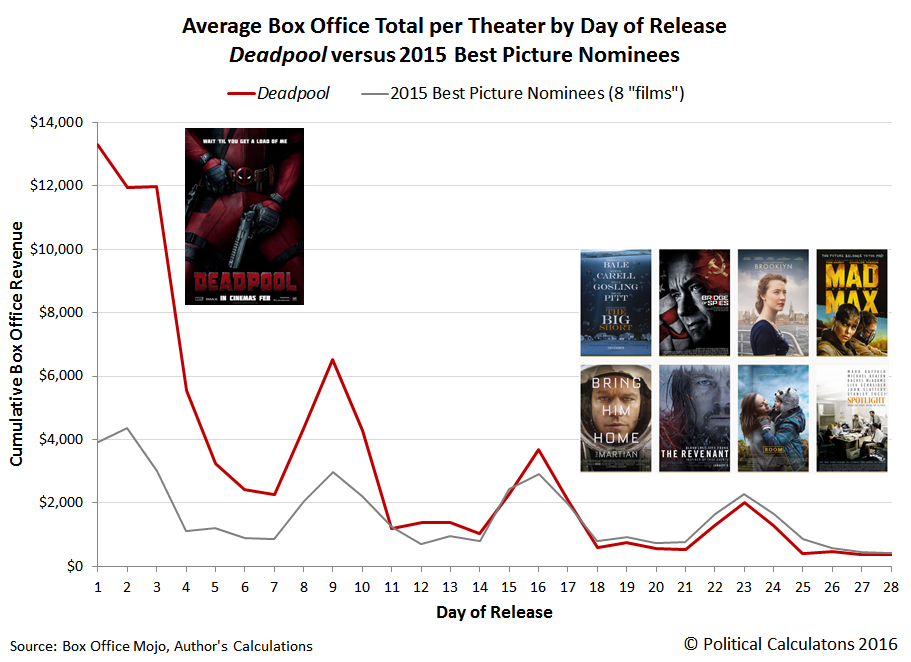 And here's how it looks when we add up the cumulative average box office per theater take. 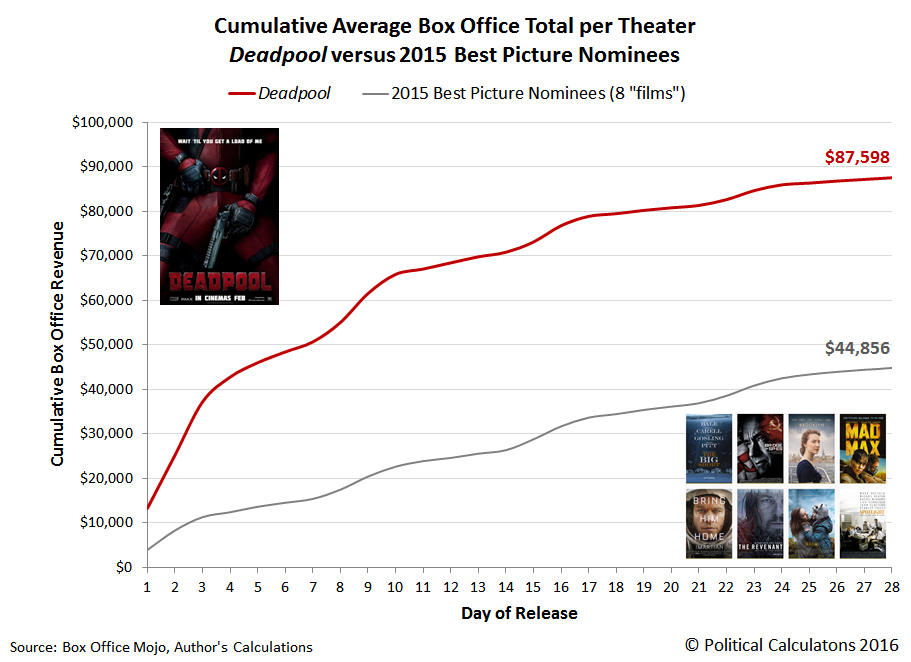 In this last chart, we confirm that Deadpool is nearly twice the movie that the eight Best Picture nominees of 2015 are where performance in Hollywood matters most. At the box office.

But here's the best part - the winner of the Academy Award for Best Picture and Pretentiousness in 2015, Spotlight, is going to have a sequel. So at some point in the future, we're going to get a rematch. Alas, without The Revenant 2.