Larger corporates in the U.S. are seeking public supports in the face of COVID19 pandemic, from airlines to banks, and the demand for public resources is likely to rise over time as the disease takes its toll on the economy.

Yet, one of the key problems faced by companies today is down to the long running strategies of creating financial supports for share prices that companies pursued over the good part of the last decade, including shares buybacks and payouts of dividends. These strategies have been demanded by the activist investors across numerous campaigns and by shareholders, and have been incentivized by the pay structures for the companies executives.

Artificial supports for share price valuations are financially dangerous in the long run, even though they generate higher shareholder value in the short run. The danger comes from:

These are just some of the factors that overall imply that shares buybacks and payouts of extraordinary (or financial unsustainable) dividends can be a dangerous approach to managing corporate finances.
So here is the evidence on just how deeply destabilizing the scale of shares buybacks and dividends payouts has been within the S&P 500 sector: 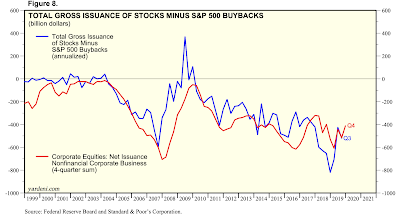 In Q3 2019, shares buybacks and dividends yielded USD1,246.73 billion on a four-quarters trailing basis, fourth highest quarter on record. Overall market yield contributions from buybacks (3.12%) was higher than that from dividends (1.81%), with combined yield of 5.05%. In simple terms, any company operating today will have to allocate 5.05 percent of its return to simply match shares buybacks and dividend payouts yields. This is a very high fence to jump.
Put differently, what the above data shows is that just one, single quarter - Q3 2019 - has managed to absorb more resources in shares repurchases and dividend payouts than what the corporate America is currently asking in financial supports from Washington.
What's scarier? Corporate finance or corona virus?..

Everything is going just plain swimmingly in the Land of MAGA, where American companies are now expected to do their duty by President Trump's agenda for investment in the U.S. because, you know, this:

As 'share' part of the EPS ratio has shrunk (thanks to buybacks and M&As tsunami of recent vintage), earnings per share should have gone up... and up... and up. Instead, small cap stocks' EPS has collapsed. To the lowest levels since the 2007-2008 crisis.

But never mind, more money printing by the Fed will surely cure it all.

Source for the above chart: @soberlook and WSJ.

Yesterday, I have posted a quite unusual (for my normal arguments) defense of the shares buybacks. Normally, as the readers of this blog know, I see buybacks as a net negative to organic investment. However, that view needs to be anchored to the economic conditions prevailing on the ground. In other words, buybacks are net negative for investment and organic economic growth, unless buybacks are companies' rational responses to specific economic and policy conditions.

With this in mind, here are my thoughts on the subject of buybacks that have accelerated in recent years: 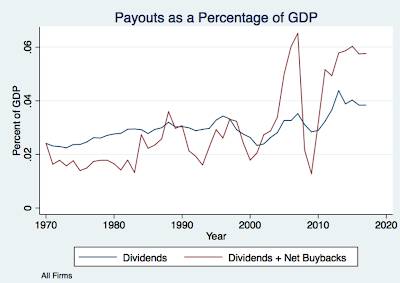 The proposition that shares buybacks are ‘starving’ (aka slowing) the economy is false. And it is false for a number of reasons, listed below:

Reason 1: Stock buybacks can ONLY slow down economic growth in the conditions when new investment by firms can generate higher economic value added than other uses of funds in the economy (e.g. investment by other agents, than the firm, or increasing aggregate demand by investors recycling gains from buybacks into general consumption, etc). Currently, this does not appear to be the case. In fact, firms are hesitant to invest in the economy even when we control for buybacks. Thus, buybacks are similar to dividends: payouts of dividends and higher buybacks rates may signal lack of profitable investment opportunities for the firms.

Reason 2: Stock buybacks can slow down economic growth if they increase cost of capital for the firms. With equity capital (shares) being made superficially more expensive than debt (QE, tax preferences, demographic shifts in clientele reasons, etc), this is not the case. equity capital is currently more expensive than debt as a funding source for new investment for listed companies. While this situation may reverse in time (which it did only on very rare occasions in the past), companies today can borrow cheaply to retire expensive equity. This might not make sense from the economy point of view (rising degree of financial leverage, increasing risk of destabilising increases in debt carry costs, etc), it might make sense from the company and management point of view.

Reason 3: Stock buybacks can harm economic growth if they reduce returns on productivity (theory of labour productivity being unrewarded via slow wages growth). This too is not the case, because labour productivity and TFP have been collapsing since prior to the increases in shares buybacks. I wrote enough about this on this blog before in the context of the twin secular stagnations theses.

S-SSS implies lack of profitable investment opportunities for short and medium-term investments by the firms. With falling TFP & labour productivity, and with demographically-induced slowdown in demand, this is patently so. S-SSS also implies the need for protracted QE and other distortions in capital funding costs that disincentivise equity capital relative to debt funding channels.

D-SSS implies that with demographic, structural shifts in economic activity across generations, etc, aggregate demand side of the economy is getting pressured. Which means, again, 2nd order effects, adverse pressure on supply side.

So shares buybacks are NOT a disaster, nor a disease. The disease is the structure of the economy, with
- Technological & human capital productivity and innovation stalling,
- Adverse demographics undermining future economic capacity,
- Infrastructure investments yielding lower potential growth uplifts,
- Policies (monetary & fiscal) stuck in the 20th century extremes,
- Increasing concentration, monopolisation & oligopolization of the economy and the markets resulting in reduced entrepreneurial activity.

Shares buybacks & resulting wealth inequality or concentration are not orthogonal sets to the political & policy mismanagement that marks the last 25 years of our (Western) history. They are DIRECT outcome of these.

So, go ahead, political punks. Make the markets day. Shut down shares buybacks, so you can keep gerrymandering the economy, manipulating the markets, & bend the society to your desired ends. The longer you do this, the more you do this, the tighter is the lid on the pressure cooker. The more spectacular the blowout to follow.
Remember the meme of the ‘recovery’?

The story of years of rising shares buy-backs by corporate desperate to do something / anything with all the debt they could get their hands on from the lending banks, whilst having no interest in investing any of these loans in real activity.

Well, back at the end of 2011 and the start of 2014, pumped up on hopium  of the so-called imminent recovery in global demand, we witnessed two dips in shares buy-backs, with resulting volatility going the flat trend taking us through some 12 months before lifting off the whole circus to new highs. 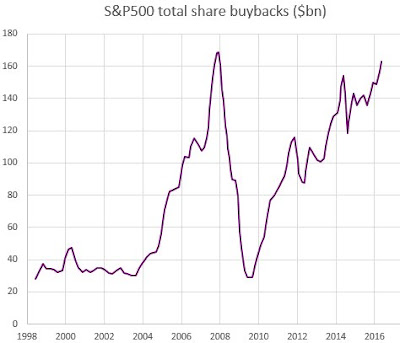 And as you can see, the same momentum is now back. Shares buy-backs are booming once again, almost reaching all time highs of 2007. Thus, the toxic scenario whereby companies use cheap credit (QE-funded) to leverage themselves only to fund shares buybacks and not to fund new investment - that vicious cycle of leverage risk and wealth destruction - is open us once again.

Note: I have been tracking the topic on this blog, covering few months back the link between buybacks and lack of corporate capex: http://trueeconomics.blogspot.com/2015/11/111115-take-buyback-pill-us-corporates.html.