If you were to drag a $100 bill through Harvard Yard, there's no telling what fool thing you can get a Harvard professor to sign onto, even if it hurts themselves. Drag enough of them through Harvard Yard and you can probably even get a former president of the university to demand that all $100 bills be eliminated from existence.

Others have gone far beyond that proposal, demanding that physical currency be eliminated altogether, and even taking action to realize their dream of a cashless society.

We have one argument against these proposals to eliminate physical currency as a legitimate form of payments in everyday transactions. 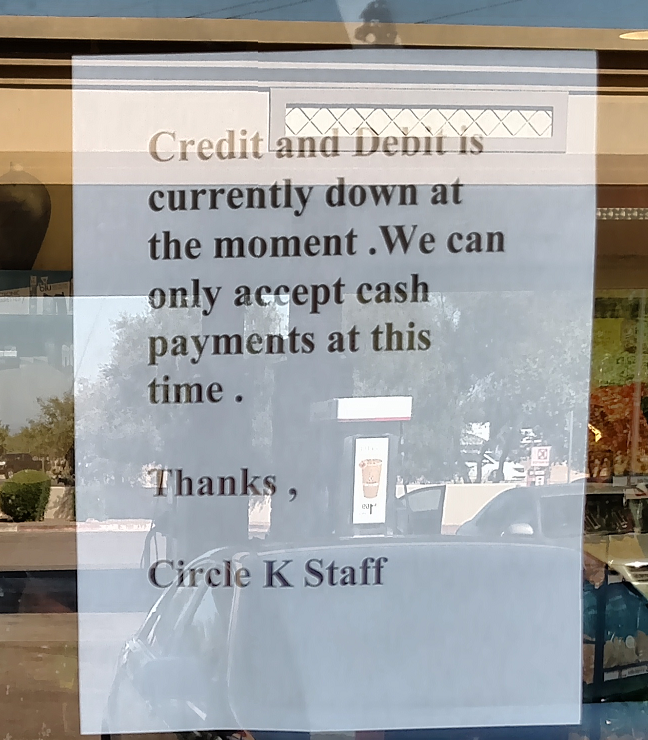 Because of the glare on the glass in the image, here's the text of the photo that was snapped within the past few weeks:

Credit and Debit is currently down at the moment. We can only accept cash payments at this time.

Inside, we witnessed customers who missed the sign posted on the outside door be turned away, their purchases of chilled containers of carbonated beverages defeated by a credit and debit transaction processing system that just wasn't connecting to the network. Which frankly, is something that many of us will directly observe several times a year without taking much notice, on account of our seeing it happen often enough that it's not some rare phenomenon.

And so, with a single sheet of paper taped to a glass door, the staff at just one Circle K has demonstrated a critical failure of any plan to eliminate physical currency from the economy.

With physical currency, it is possible to continue engaging in trade and commerce during any of the following scenarios that would quickly and easily bring electronic commerce through credit and debit charges to a halt:

Eliminating physical currency then would increase the vulnerability of a nation's economy to damage from such calamities because it removes a key redundancy by which which economic activity may otherwise continue in the face of such obstacles. A nation that adopted such a policy would effectively be harming its own national security.

Now, here's the fun part. Former U.S. Treasury Secretary and Harvard President Larry Summers cited the popularity of large denomination bills among regular criminals in his argument for why he believes the $100 bill should be removed from circulation.

But the whole Panama Papers scandal that just erupted onto the world stage reveals that almost all of the money involved in the shady dealings that took place over years wasn't in the form of $100 bills. Instead, the billions that were being unlawfully funneled into the shell accounts of the crooked and corrupt were moved almost entirely electronically through established financial institutions. Apparently, the really big criminals are really big into the modern convenience of electronic commerce!

That's why we're going to suggest a smarter alternative - one that even a former Harvard President should consider signing onto, because not many criminals would consider dragging anything so valuable through Harvard Yard.

Then again, this is Harvard we're talking about. For regular people, it probably wouldn't be a bad idea to keep some cash around that could be considered to be part of one's disaster preparedness kit.