The story of the Panama Papers leak has brought, on a 3.6 terabyte scale, the issue of money laundering and tax evasion back to the forefront of the mainstream media. However, quietly, and unnoticed by the majority of the punters, tax optimisation and tax evasion have been moving closer and closer to the homesteads of the Governments so keen on reducing it elsewhere, beyond their own borders.

Here are just a couple of links worth checking out on the matter:

Panama’s first dappling with tax haven status was in 1927, when the country accommodated first registrations of foreign ships in a move designed to shield Rockefeller's Standard Oil from U.S. taxmen. The law allowed foreign owners to set up tax-free, anonymous corporations with little disclosures, including no requirement to disclose beneficial owners.

By 1948, the country set up its first ‘free trade zones’. One of these - the Colon FTZ - became the largest free trade zone (or tax free zone) in all of the Americas, a hit spot for trading for narcos and black marketeers.

By 1980s, Panama was saturated with offshore accounts schemes and by 1980s these started to attract large volumes of drug money. By the late 1990s, the former were pushed deeper into secrecy and the top trade became politicians, wealthy individual investors and others.

The U.S. always knew this. And the U.S. knew this when in penned and subsequently implemented the 2011 Free Trade Agreement (with both Presidents George W. Bush and Barak Obama being behind that pearl of ‘free trade’ wisdom). One side of the coin was that FTA required Panama to enter into a separate tax information exchange treaty with the U.S., on the surface, implying improved transparency. But behind the scenes, Panama gained effectively an ‘all-clear’ sign from the U.S., making the country officially ‘compliant’. This meant that Panama could operate even more brazenly in the global markets, as long as it satisfied minimal U.S. requirements on disclosures.

Worse, until February 2016, the Financial Action Task Force (FATF), an international body responsible for setting and monitoring anti-money laundering rules, had Panama on its "blacklist" of non-compliant countries. Something the U.S. knew too. It was removed from the list because the Government passed some new laws designed to curb inflows of outright criminal funds into its financial system

In February 2014, the IMF carried out review of Panama’s regulatory and enforcement regimes relating to FATF regulations. Here is the first line conclusion from the IMF: “Panama is vulnerable to money laundering (ML) from a number of sources including drug trafficking and other predicate crimes committed abroad such as fraud, financial and tax crimes” (see full report here: http://www.imf.org/external/pubs/ft/scr/2014/cr1454.pdf).

When it comes to money laundering (ML), the IMF states that “According to the [Panamanian] authorities, the largest source of ML is drug trafficking. Other significant but less important predicate offenses and sources of ML are cited to include: arms trafficking, financial crimes, human trafficking, kidnapping, corruption of public officials and illicit enrichment. With respect to predicate crimes committed outside of Panama, the authorities indicate that these would include activities related to financial crimes, tax crimes (tax evasion is not a predicate crime for ML in Panama) and fraud. These foreign offenses are likely to be linked with Panama’s position as an offshore jurisdiction. It is believed that ML related to these crimes is conducted electronically through the use of computers and the internet using new banking instruments and systems both in Panama and internationally. The authorities indicated that the diversity of foreign predicate crimes has been increasing in recent times.”

This all is now coming as a shocker for the U.S. and UK and European authorities in the wake of the Panama Papers leak? Give me a break!

The co-founder of Mossack Fonseca, Ramon Fonseca, recently accused the BEPS-leading countries, the U.S. and UK of hypocrisy. "I assure you there is more dirty money in New York, Miami and London than there is in Panama," he told the New York Times (see: http://www.bbc.com/news/business-35998801). And just in case you wonder, here are top 30 countries in terms of financial secrecy laws: 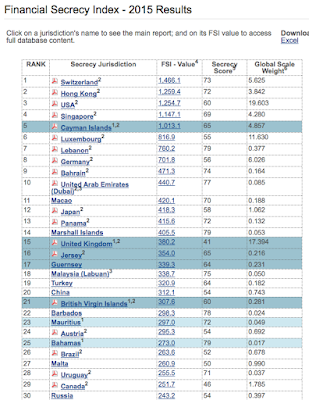 Source: http://www.financialsecrecyindex.com/introduction/fsi-2015-results
Yep. USA - Number 3... and so on...