The Law of Unintended Consequences in a case of anti-discrimination law? It appears to be so.

A graduate paper from MIT Economics by Alexander Bartik and Scott Nelson, titled “Credit Reports as Résumés: The Incidence of Pre-Employment Credit Screening” (see March 7, 2016, MIT Department of Economics Graduate Student Research Paper 16-01: http://ssrn.com/abstract=2759560) looks at “recent bans on employers' use of credit reports to screen job applicants – a practice that has been popular among employers, but controversial for its perceived disparate impact on racial minorities.” Controlling for geographic, temporal, and job-level variations the authors “analyze these bans' effects in two datasets: the panel dimension of the Current Population Survey (CPS); and data aggregated from state unemployment insurance records.”

Key finding: “the bans reduced job-finding rates for blacks by 7 to 16 log points, and increased subsequent separation rates for black new hires by 3 percentage points, arguably contrary to the bans' intended effects. Results for Hispanics and whites are less conclusive. We interpret these findings in a statistical discrimination model in which credit report data, more so for blacks than for other groups, send a high-precision signal relative to the precision of employers' priors.”

It is worth noting limitations to the study, clearly identified by the authors, however. In particular those relating to “Catch-22” scenario: “the question of how [survey data] interacts with household balance sheets: if highly levered households are more likely to become delinquent soon after job loss, employers’ use of PECS will make job finding more difficult for these households, thus exacerbating long-run unemployment for an important subset of the population. Indeed, the “Catch-22” of being unable to repay debts because of unemployment, and being unable to become employed because of unpaid debts, has been another salient policy motivation for [use of credit reports in hiring] bans”.

On the other hand, as noted by authors, other studies largely align with the core findings that the ban has been harmful to the category of applicants its is designed to protect.

“Is it reasonable that restrictions on the use of information like PECS in the hiring process can have such a large impact on job-finding rates? Other evidence from the literature suggests yes. Studying the effect of the usage of credit information in hiring in Sweden, Bos et al. (2015) find that the removal of information on past defaults from credit reports results in a 6.5 percent increase in employment rates for affected individuals in the year after the past default information removal. In related work, Wozniak (2014) finds that laws discouraging or encouraging the use of drug-testing in the hiring process have a 7 to 30 percent effect of black employment levels in affected industries. Both of these papers suggest that regulations of information used in the hiring process can have economically large impacts on employment outcomes.34 However, the large magnitude of our results does suggest the need for caution in their interpretation until these findings can be explored in further research.” 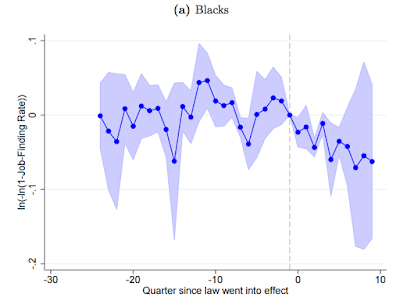 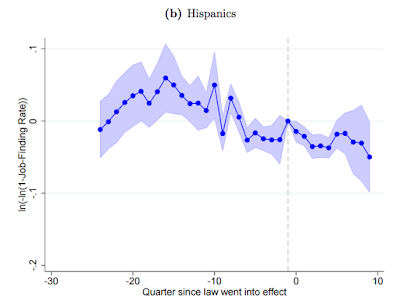 Note: If anyone seen any worthy responses / comments relating to this paper, its findings and/or methodology, do let me know by commenting below. I am sure we are going to see some serious debates emerging over time about these findings.