Risk of leverage has been a cornerstone of our recent lectures concerning the corporate capital structure decisions in the MBAG 8679A: Risk & Resilience:Applications in Risk Management class at MIIS. However, as noted on a number of occasions in both MBAG 8679A and other courses I teach at MIIS, from macroeconomic point of view, corporate leverage risks are just one component of the overall economic leveraging equation. The other three components are: household debt, government debt, and the set of interactions between the burden of all three debt sources and the financial system at large.

An interesting research paper by Mikael Juselius and Mathias Drehmann, titled “Leverage Dynamics and the Burden of Debt” (2016, Bank of Finland Research Discussion Paper No. 3/2016: http://ssrn.com/abstract=2759779) looks that both leverage risk arising from the U.S. corporate side and household side.

Per authors, “in addition to leverage, the debt service burden of households and firms is an important link between financial and real developments at the aggregate level. Using US data from 1985 to 2013, we find that the debt service burden has sizeable negative effects on expenditure.” This, in turn, translates into lower economy-wide investment and consumption - two key components of the aggregate demand. Debt “interplay with leverage also explains several data puzzles, such as the lack of above-trend output growth during credit booms and the depth and length of ensuing recessions, without appealing to large shocks or non-linearities. Using data up to 2005, our model predicts paths for credit and expenditure that closely match actual developments before and during the Great Recession.”

With slightly more details: the authors found that “the credit-to-GDP ratio is cointegrated with real asset prices, on the one hand, and with lending rates, on the other. This implies that the trend increase in the credit-to-GDP ratio over the last 30 years can be attributed to falling lending rates and rising real asset prices. The latter two variables are, moreover, inversely related in the long-run.”

In addition and “more importantly, we find that the deviations from the two long-run relationships - the leverage gap and the debt service gap henceforth - have sizeable effects on credit and output. …real credit growth increases when the leverage gap is negative, for instance due to high asset prices. And higher credit growth in turn boosts output growth. Going beyond the existing evidence, we find that the debt service gap plays an additional important role at the aggregate level that has generally been overlooked: it has a strong negative impact on consumption and investment. In addition, it negatively affects credit and real asset price growth.”

The link between leverage gap and debt service gap: 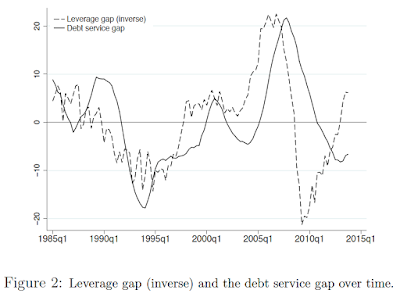 In summary, “The leverage and debt service gaps hold the key for explaining the divergence of credit and output in recent decades. For instance, in the late 1980s and mid 2000s both gaps were negative boosting credit and asset price growth. This had a positive effect on output, but not one-to-one with credit, which caused the credit-to-GDP ratio to rise. This in turn pushed the debt service gap to positive values, at which point it started to offset the output effects from high credit growth so that output growth returned to trend. Yet, as the leverage gap remained negative, credit growth was still high, ie we observed a “growthless” credit boom. This continued to increase the debt-service gap, which had a growing negative effect on asset prices and expenditure, driving the leverage gap into positive territory. And once both gaps became positive they worked in the same direction, generating a sharp decline in output even without additional
large shocks or crises-related non-linearities. The subsequent downturns were deep and protracted, as the per-period reduction in credit had to be faster than the per-period decline in output in order to lower the credit-to-GDP ratio and thereby close the two gaps. This also implied that the recovery was “creditless”.”