Relating to our previous discussions in the MBAG 8679A: Risk & Resilience: Applications in Risk Management class, especially to the issue of leverage, recall the empirical evidence on debt distribution and leverage across the European countries corporate sectors.

Antonio De Socio and Paolo Finaldi Russo recently contributed to the subject in a paper, titled “The Debt of Italian Non-Financial Firms: An International Comparison” (February 25, 2016, Bank of Italy Occasional Paper No. 308: http://ssrn.com/abstract=2759873).

Per authors, “In the run-up to the financial crisis Italian firms significantly increased their debt in absolute terms and in relation to equity and GDP.” This is not new to us, as we have covered this evidence before, but here are two neat summaries of that data: 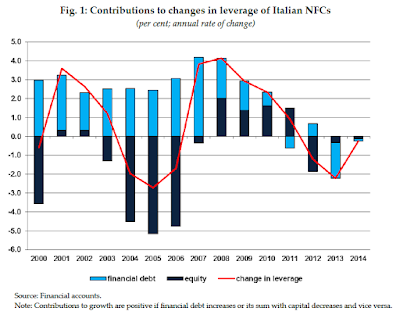 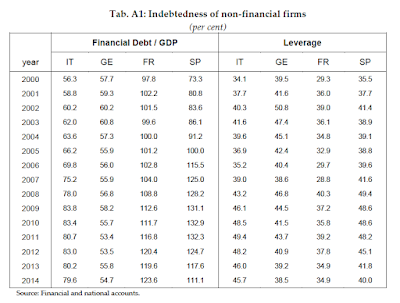 Another interesting insight is the source of this gap. “We find that, controlling for several firm-specific characteristics (i.e. age, profitability, asset tangibility, asset liquidity, turnover growth), the leverage of Italian firms is about 10 percentage points higher than in other euro area countries. Differences are systematically larger among micro and small firms, whereas they are small and weakly significant for firms with assets above 300 million euros.”

But equity gap, defined as “the amount of debt to be transformed into equity type funds in order to fill the leverage gap with other countries”, is not uniform over time.

Authors note one influential outlier in the data: “A large part of the estimated corrections is due to the comparison with French firms, which on average have one of the lowest levels of leverage in Europe. Excluding these companies, the equity gap would drop to 180 billion euros.” 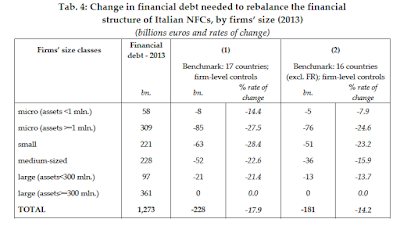 Dynamically, “the results indicate that the gap has widened somewhat since 2009, from about 180 to 230 billion euros”.

Given the EU-wide (largely rhetorical) push for increasing capital structure gearing toward equity, “the Italian Government recently put in place some incentives to encourage recourse to equity financing by reducing the debt tax shield: a cap on the amount of interest expense that could be deducted from taxable income and tax deductions linked to increases in equity (according to the Allowance for Corporate Equity scheme). Similarly, other measures have also been aimed at strengthening the supply of risk capital for Italian firms. The results of our analysis suggest that Italian firms still need this kind of incentives to strengthen their financial structure.”