Earlier this week, I posted my latest comprehensive deck covering Russian economy prospects for 2016-2017 (see here: http://trueeconomics.blogspot.com/2016/04/20416-russian-deck-update-april-2016.html). Key conclusion from that data was that Russian economy is desperately searching for a domestic growth catalyst and not finding one to-date.

Today, we have some new data out showing there has been significant deterioration in the underlying economic conditions in the Russian economy and confirming my key thesis.

As reported by BOFIT, based on Russian data, “Russian economy has shrunk considerably from
early 2015. Seasonally adjusted figures show a substantial recovery in industrial output in the first three months of this year. Extractive industries, particularly oil production, drove that growth with production in the extractive sector rising nearly 3.5 % y-o-y. Seasonally adjusted manufacturing output remained rather flat in the first quarter with output down more than 3 % y-o-y.”

As the result, “the economy ministry estimates GDP declined slightly less than 2% y-o-y in 1Q16. Adjusting for the February 29 “leap day,” the fall was closer to 2.5%.” 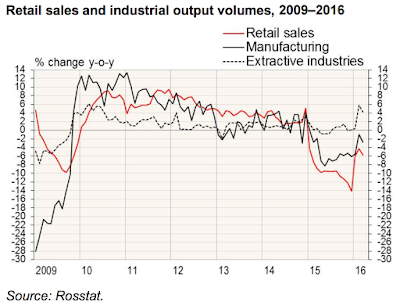 Oil and gas production, however, continued to boom: 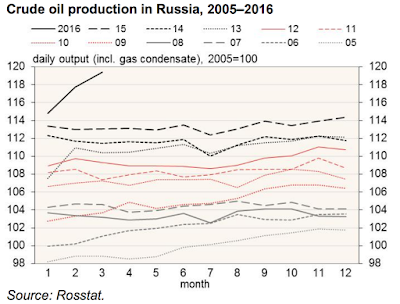 What’s happening? “Russian crude oil output was up in January-March by 4.5% y-o-y to record levels. Under Russia’s interpretation of the proposed production freeze to January levels, it could increase oil output this year by 1.5‒2%. The energy ministry just recently estimated that growth of output this year would only reach 0.5‒1%, which is quite in line with the latest estimate of the International Energy Agency (IEA). However, Russia’s energy ministry expects Russian oil exports to increase 4‒6% this year as domestic oil consumption falls.”

It is worth noting that the signals of a renewed pressure on economic growth side have been present in advanced data for some time now.

Two charts below show Russian (and other BRIC) Manufacturing and Services PMIs: 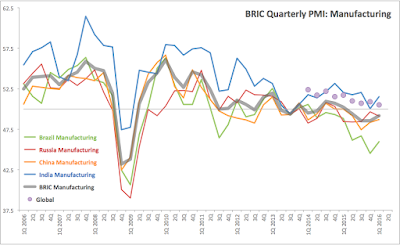 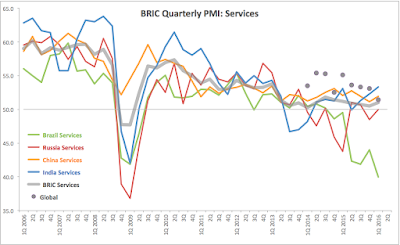 Both indicate effectively no recovery in the two sectors in 1Q 2016. While Services PMI ended 1Q 2016 with a quarterly average reading of 50.0 (zero growth), marking second consecutive quarter of zero-to-negative growth in the sector, Manufacturing PMI posted average reading of 49.1, below the 50.0 zero growth line and below already contractionary 49.7 reading for 4Q 2015.

In simple terms, the problem remains even though its acuteness might have abated somewhat.
Updated version of my Russian markets deck 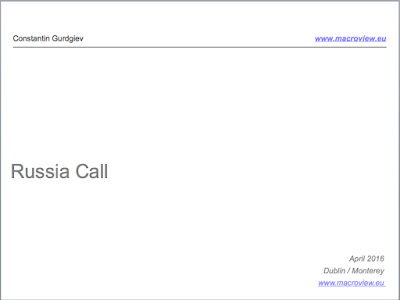 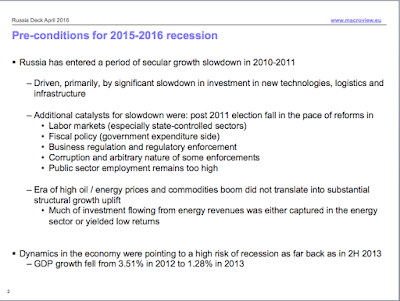 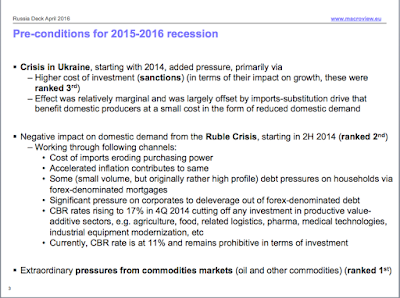 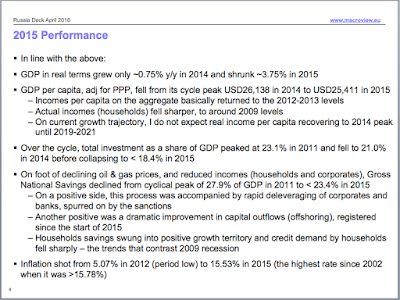 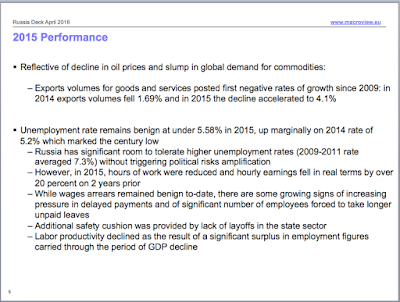 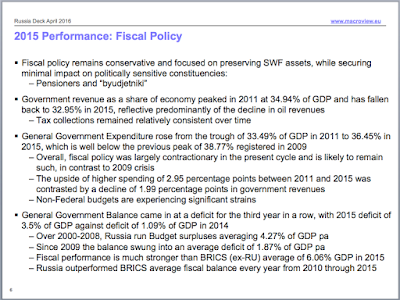 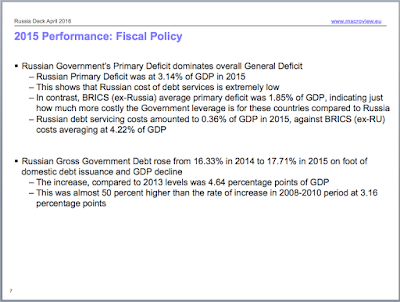 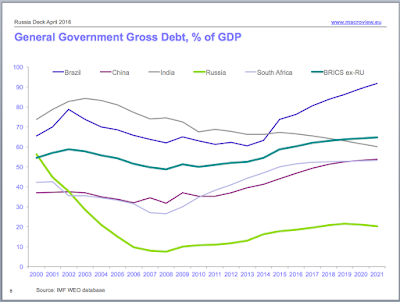 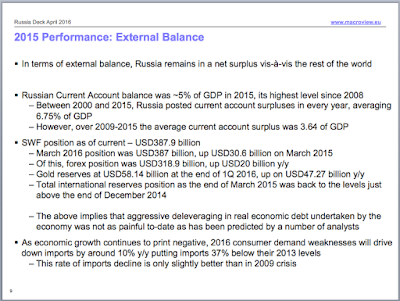 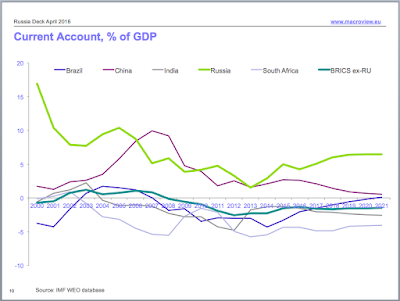 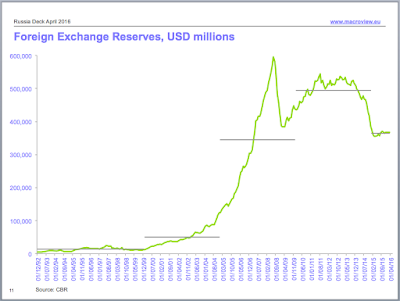 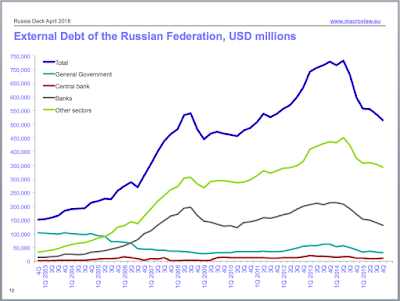 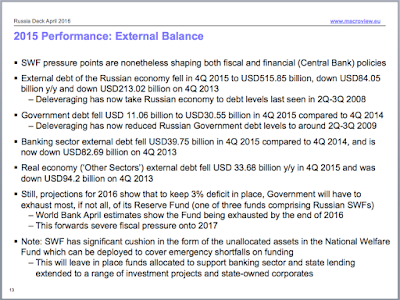 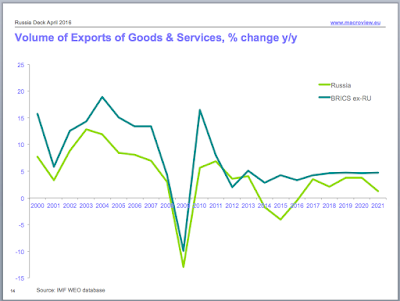 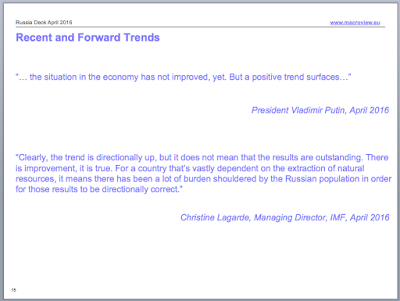 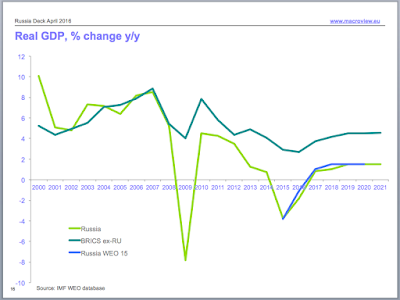 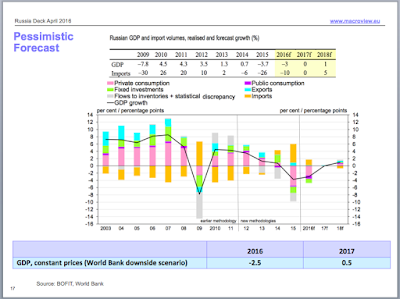 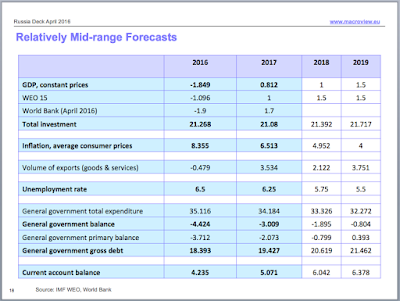 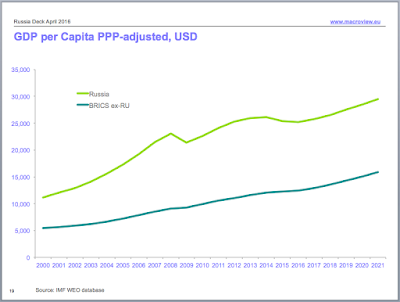 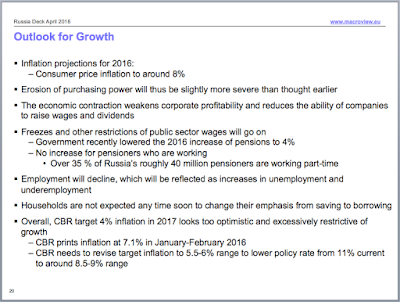 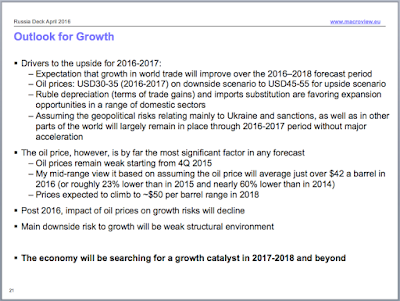 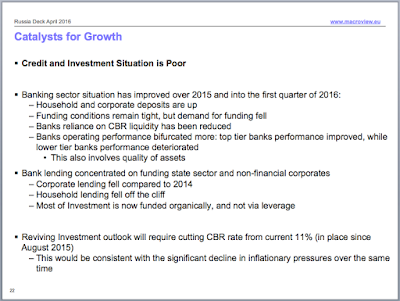 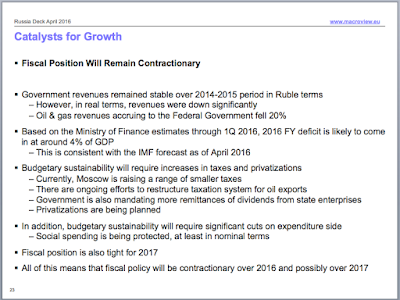 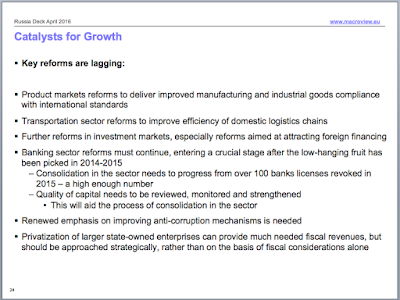 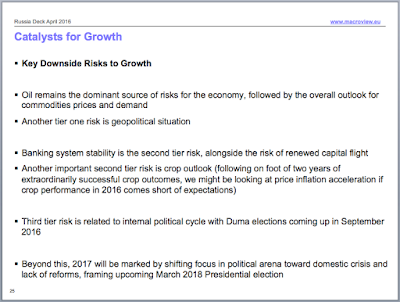