An interesting assessment of Italian household debt levels in the context of over-indebtedness by D'Alessio, Giovanni and Iezzi, Stefano, (paper “Over-Indebtedness in Italy: How Widespread and Persistent is it?”. March 18, 2016, Bank of Italy Occasional Paper No. 319. http://ssrn.com/abstract=2772485).

Using the Eurosystem’s Household Finance and Consumption Survey (HFCS) the authors also compare the over-indebtedness of Italian households with that of other euro-area countries (Ireland, as usual, nowhere to be found, presumably because we don’t have data).

Here is a summary table for euro area households over-indebtedness: 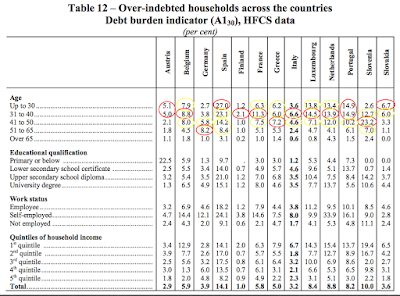 Several things can be highlighted from this table:


In simple terms, the above evidence can be consistent with sustained, decade-long transfers of wealth (via debt channel) from younger and middle-age generation to older generation (>50 years of age). System of taxation that induces higher volatility to incomes of self-employed compared to those in traditional employment might be another contributing factor.