Much has been written, taught and said about the New Age of Entrepreneurship and the new generations of entrepreneurs, allegedly springing up across the modern economies. The problem is, for all the marketing hype and academic programs enthusiasm, entrepreneurship (new business formation) is actually running pretty low.

Here is the U.S. data on new business formation: 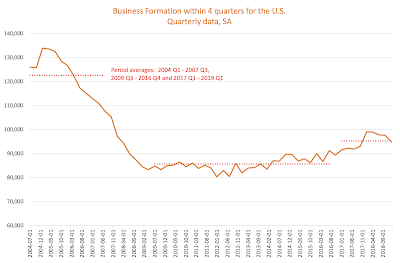 While other data, e.g. Kauffman Foundation, shows relatively stable and even higher rates of entrepreneurship over recent years, much of this data aggregates both incorporated and non-incorporated businesses, including sole traders and self-employed. This is reflected in the fact that entrepreneurship rates in recent years have been sustained solely by a massive increase in entrepreneurship uptake by individuals with less than high school education and of older age cohorts: 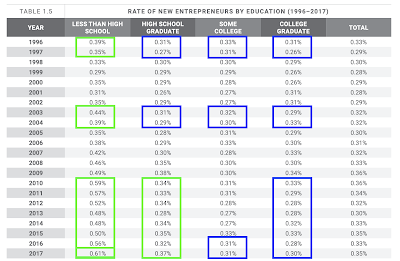 Over the same time, cohorts with higher education have seen a decrease in their entrepreneurship rates, driven in part by their rising share of population, their rising numbers, and, well, yes, lower incentives to undertake entrepreneurial risks.

Now, as to the age of entrepreneurs we have. 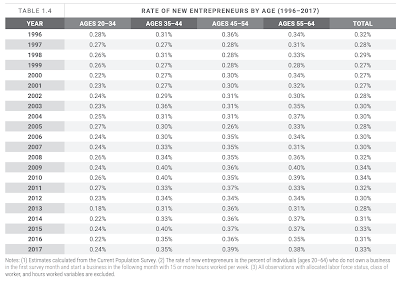 So, to that often repeated popular and academist 'truism' of the New Age of Entrepreneurship and the great entrepreneurial spirit of the younger generations... errr, not quite.

Note: caveats notwithstanding, good data on the subject is available here: https://www.kauffman.org/currents/2019/02/indicators-provides-early-stage-entrepreneurship-data.

These days, every business school on every university campus is sporting a burgeoning post-graduate program in Entrepreneurship. And this trend is driven by the perceived - and often hyped up by the media and by business futurists - rise in entrepreneurship in the modern society. Apparently, allegedly, an increasing proportion of today's business students want to start their own businesses (despite the fact the vast majority have never worked in a start-up and have no expertise to run one). The new dynamism of the economy, the college-to-start up model of business education, the 'can do' attitude (or aspirations) are all part and parcel of the mythological creature that is the New Economy.

In reality, of course, brutally put, there is no evidence of rising demand for entrepreneurship. And, worse, in fact, there has been a dramatic decline in entrepreneurial rates in the U.S. economy: 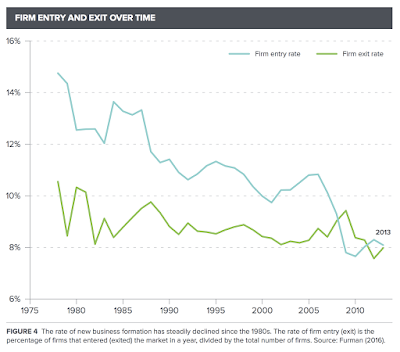 Now, consider the two data series above, together: firm entry (new firms creation) and firm exist rates. As the blue line trended down, rapidly, without a pause, the green line remained relatively flat. Which means that the ratio of entries to exits has fallen over the time, pretty dramatically. In the 1970s and 1980s, firms entries had, on average been more frequent and less likely to be associated with higher firm exits. In the 1990s,  both relationship deteriorated. In the 2000s, both literally went down the drain.

So as the rate of new businesses additions went down, the rate of old businesses exiting did not change that much. So much for dynamism and for 'entrepreneurial spirits' of the young. The start ups mythology is strong. But the reality of the U.S. economy is that of concentration, market power, monopolization and decline of entrepreneurship. Funny thing, how Silicon Valley propaganda works, right?

How do we know the bit about monopolization? Why, look at profit share of output: 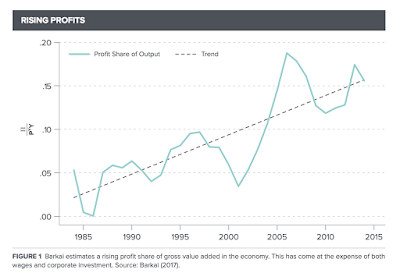 Still want to build up that 'entrepreneurship program' in the University? Because students want to learn about starting their own businesses? Should you really think twice?

A recent paper, based on a “survey of participants in a large-scale business plan competition experiment, [in Nigeria] in which winners received an average of US$50,000 each, is used to elicit beliefs about what the outcomes would have been in the alternative treatment status.”

“Ex ante one can think of several possibilities as to the likely accuracy of the counterfactuals”:

The actual results show that business owners “do not provide accurate counterfactuals” even in this case where competition awards (and thus intervention or shock) was very large.


Or in other words: losers overestimate benefits of winning, winners overestimate the adverse impact from losing... and no one is capable of correctly analysing own counterfactuals.