A recent study based on data from Austria looked at the impact of compulsory voting laws on voter quality.

Based on state and national elections data from 1949-2010, the authors “show that compulsory voting laws with weakly enforced fines increase turnout by roughly 10 percentage points. However, we find no evidence that this change in turnout affected government spending patterns (in levels or composition) or electoral outcomes. Individual-level data on turnout and political preferences suggest these results occur because individuals swayed to vote due to compulsory voting are more likely to be non-partisan, have low interest in politics, and be uninformed.”

In other words, it looks like there is a selection bias being triggered by compulsory voting: lower quality of voters enter the process, but due to their lower quality, these voters do not induce a bias away from state quo. Whatever the merit of increasing voter turnouts via compulsory voting requirements may be, it does not appear to bring about more enlightened choices in policies.

So can you 'vote out' stupidity?.. 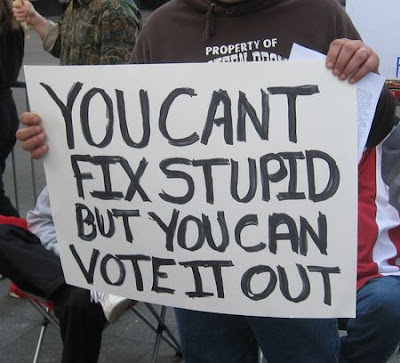