A third paper on manufacturing capacity, also from Italy is by Libero Monteforte and Giordano Zevi, titled “An Inquiry into Manufacturing Capacity in Italy after the Double-Dip Recession” (January 21, 2016, Bank of Italy Occasional Paper No. 302: http://ssrn.com/abstract=2759786).

Here, the authors “…investigate the effects of the prolonged double-dip recession on the productive capacity of the Italian manufacturing sector”. The authors “…estimate that between 2007 and 2013 capacity contracted by 11–17%, depending on the method.”

In addition, the authors “…conduct an exercise to quantify the loss with respect to a counterfactual evolution of capacity in a ‘no-crisis’ scenario in which pre-2008 trends are extrapolated: in this case the loss is close to 20% for all methods.”

Summary of the results: 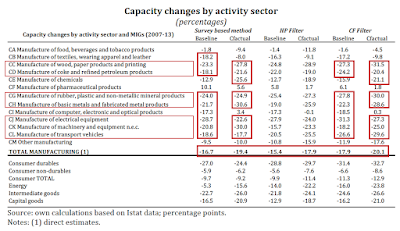 And here is decomposition of the potential output drop by factor of production: 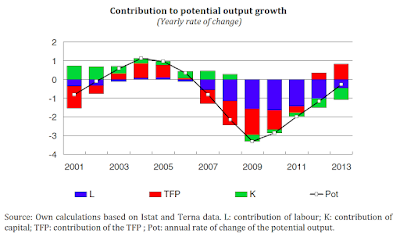 Per authors: “In terms of factor determinants, about 60% of the cumulated drop of potential output in 2007-13 came from labour, while around 25% was attributable to the TFP (Chart above). The reason why the contribution of capital is comparatively small is twofold: first, the industrial
sector is characterized by a large wage share (close to 70%), therefore the contribution of K in the production function is limited; second, capital is a highly persistent variable and the fall in investments recorded during the two recessions, even if remarkably large, has not (so far)
resulted in a dramatic drop of the capital stock.”

The key lessons from all of this are: potential output in Italy fell precipitously across the manufacturing economy in the wake of the Global Financial Crisis. Meanwhile, counterfactual extension of pre-crisis trends was strongly signalling to the upside in manufacturing.

Majority of metrics used suggest that productive capacity in Italy declined by 15-18 percent through 2013, while counterfactual estimates for pre-crisis trend would have implied an average rise of ca 5 percent.

Last, but not least, “Firms producing basic metals, fabricated metal products and machinery and equipment are found to be the ones that were most penalized by the crisis of the last six years; by contrast, sectors that were already shrinking before 2008, such as the manufacture of textiles, appear not to have performed significantly worse during the double-dip recessions than they had in the early 2000s.”
Staying with the earlier theme of industrial / manufacturing sector trends, here is a paper from the Banca d’Italia, authored by Andrea Locatelli, Libero Monteforte, and Giordano Zevi, titled “Heterogeneous Fall in Productive Capacity in Italian Industry During the 2008-13 Double-Dip Recession” (January 21, 2016, Bank of Italy Occasional Paper No. 303: http://ssrn.com/abstract=2759788) looks at the two periods of shocks, separated by one period of brief recovery. 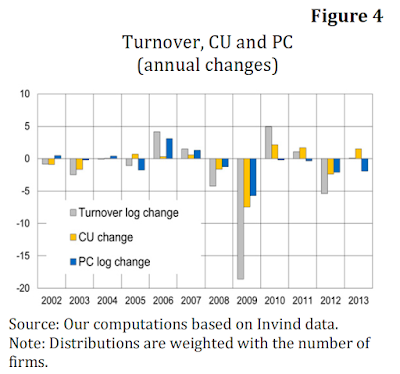 The study main findings are:
i) “losses of productive capacity varied widely across manufacturing sub-sectors with differences in pre-crisis trends tending to persist in a few sub-sectors during the double-dip recession”;
ii) “large firms were more successful in avoiding major capacity losses, especially in the first phase of the crisis”;
iii) “the share of sales on foreign markets was negatively correlated with performance in 2008-09, but the correlation turned positive in 2012-13”;
iv) “among the Italian macro-regions, the Centre weathered the long recession better” (see charts below);
v) “subsidiaries underperformed firms not belonging to any group”; and
vi) “the negative effects on productive capacity of credit constraints, which discouraged investments, were felt by Italian firms particularly in 2012-13”. 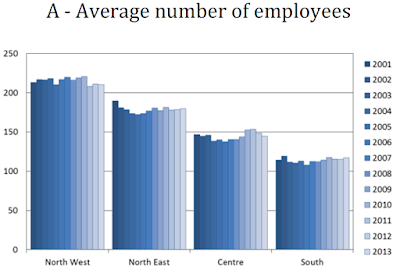 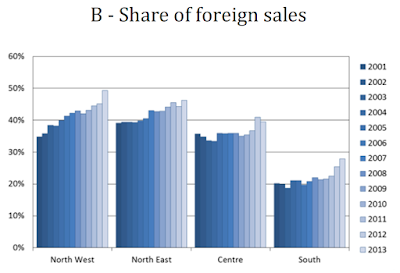 Some beef on that point: “The decline in [productive capacity] was not evenly distributed across the Italian macro-regions. The macro-regions more exposed to foreign demand were severely hit by the global financial crisis, with [productive capacity] declining by 8.6% in the North West and 7.0% in the North East.” Now, here’s the irony: Italy was (barely) able to sustain long-term Government borrowing on foot of its extremely strong exporters. During the recent twin crises, this very strength of the Italian economy turned against it. Which sort of raises few eyebrows: strong exporting capacity of Italy led the country to experience sharper shock than in many other states. Yet, the core prescription for growth from across the EU members states is - export!; and core prescription for recovery from the status quo main stream economists is - beef up current ace t surpluses (aka, raise exports relative to imports). Italian evidence does not really sound that supportive of these two ‘solutions’…

“The sovereign debt crisis affected the entire country more evenly. As a result, between 2010 and 2013 the loss of [productive capacity] in the South (-8.0%) was roughly twice as large as that recorded in the rest of the country (-4.7%)… The gap reflects the within-country heterogeneity in firms’ characteristics : …South Italy has mainly small firms, with an average of 100 employees (roughly constant during the double-dip crisis). Average firm size is larger in the Centre, just below 150, and in the North East, around 180, and even more so in the North West (consistently above 200). …southern regions have smaller export shares (about 20%), which are higher everywhere else (around 35% at the beginning of the sample); the export share shows a positive trend in all macro-regions.” You can see these reflected in the charts above.

In summary, thus, “the degree of foreign exposure helps to explain why the North suffered more during the global financial crisis. Also, the continuing decline of [productive capacity] in the South since 2007 is consistent with the smaller firm size in that macro-area (discussed above) and the larger decline of domestic demand there”.


So the key lesson here is: in the current environment characterised by rising regionalisation of trade flows and weak global demand, the exports-led recovery is more likely to trigger a negative shock to the economy than support economic growth.

Unless you are talking about a country like Ireland, where exports are booming despite global demand slowdown. Which, of course, cannot be explained by anything other than beggar-thy-neighbour tax optimisation policies.

Couple of posts relating to most current research on the recovery and longer term prospects in global manufacturing. As usual here, we shall focus on the advanced economies.

A recent NBER paper, by Andrew Bernard, Valerie Smeets, and Frederic Warzynski, titled “Rethinking Deindustrialization” (March 2016, NBER Working Paper No. w22114: http://ssrn.com/abstract=2755386) looked at decline in manufacturing activity in Denmark, showing that “manufacturing employment and the number of firms have been shrinking as a share of the total and in absolute levels.” The authors examine this phenomena over the period of 1994 to 2007.

“While most of the decline can be attributed to firm exit and reduced employment at surviving manufacturers, we document that a non-negligible portion is due to firms switching industries, from manufacturing to services.”

Here is an interesting list of related findings based on looking closer at the “last group of firms before, during, and after their sector switch”:


Net result? Quite surprising conclusion that the “findings emphasize that the focus on employment at manufacturing firms overstates the loss in manufacturing-related capabilities that are actually retained in many firms that switch industries.” 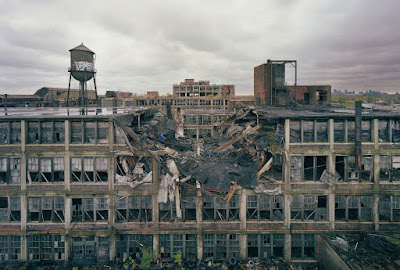