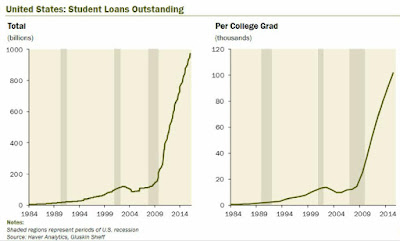 The numbers are simply mad: total debt rose from around USD 100 billion ca 2006 to almost USD 1 trillion by the end of 2015. On a per capita of student population basis, same period rise was from around USD 16,000 per student to over USD100,000 per student. More recent data, through May 2016 shows that average student debt is now at USD133,000 and the total quantum of student loans outstanding is at over USD 1.2 trillion.

Data from Bloomberg, through 2014, shows that Federal Government-originated student loans have increased 10-fold since 1990:

This is not just worrying - it is outright unsustainable. Students loans are predominantly fixed interest rate loans. However, even in the current benign environment, interest rates on this debt are high: 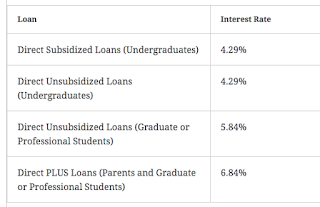 So the key risk to the student loans debt is not from interest rates increases, but from the fact that it is a secondary debt: as interest rates rise, households priorities on paying down short term credit (credit cards) will take more precedence over longer-term fixed rate debt. Student loans are likely to suffer from higher risk of non-payment.

Currently, 43% of student loans are in default, representing an improvement over 2014 default rate of 46%. The Wall Street Journal recently attributed this decline to programs that allow some borrowers to lower their student loan payments by connecting them to a percentage of the borrower's income (also known as income-driven repayment). The number of borrowers taking advantage of the schemes nearly doubled since 2015 to 4.6 million.

U.S. student loans are, in very simple term, a ticking time bomb. The indebted generation is in the younger demographic with limited income prospects and the job markets that are longer-term characterised by greater income volatility and lower income trends. This means that repayment of these loans exerts greater pressure on household savings and investments exactly at the period of the household life-cycle when American workers benefit the greatest from the compounding effects of savings and investments on life-time income. In other words, the opportunity cost of this debt is the greatest.