My recent article for The Currency on some tight corners to be navigated by the Biden-Harris Administration as the Democrats grapple with controlling the two branches of the State: https://thecurrency.news/articles/33887/biden-harris-and-the-unbearable-lightness-of-winning/ 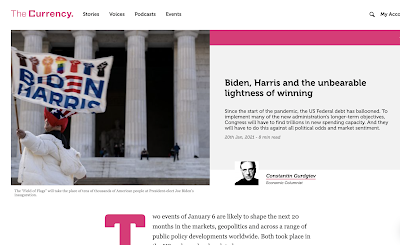 Following last night's election results, Bitcoin rose sharply in value, in line with gold, while other digital currencies largely failed to provide a safe haven against the extreme spike in markets volatility.

In a recent project, our students @MIIS have looked at the relative valuation of Bitcoin and Ether (cryptocurrency backing Ethereum blockchain platform) highlighting

The conclusion of the case study was squarely in line with Bitcoin and Ether behaviour observed today: Bitcoin outperforms Ether as both a hedge and a safe haven, and has stronger risk-adjusted returns potential over the next 5 years.
See the case here: http://www.economist.com/whichmba/mba-case-studies/investment-case-study-competition-2016/middlebury-institute-international-studies and please, give your vote to the team of our students. 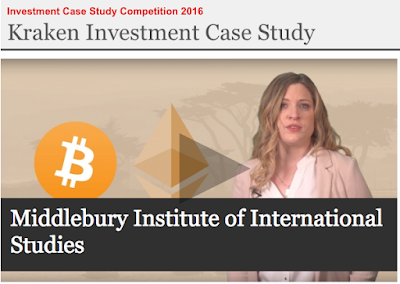 Despite offering, to many people, especially those tending to think of themselves as either 'liberal left' or centre to centre-right, the upcoming U.S. Presidential vote offers one alternative: voting for Hillary Clinton. It is an undesirable alternative for many of them. And yet, given the state of her opposition, it is (allegedly) the only one.

Hence, it is rare in the current political sh*t storm (which does not qualify for a mature debate) to see reasoned, well-argued analysis of the potential outrun of Hillary Clinton. And, hence, it is very important to try to understand such an outrun.

One of the best articles on the topic I have run across (no, I do not fully agree with it in its entirety, which, of course, does not subtract from its merits) is here: http://www.reuters.com/article/us-election-debate-commentary-idUSKCN12K1IL.

There are serious and measured facts provided in the piece on, for example, Hillary Clinton's innate inability to inspire even her core constituency. And there are serious claims being made about incremental change potential from the Clinton Presidency, or at least a claim to such change as a mandate. There is a very important point of learning here for the Republican party, even though that point is not original and was, in fact, made by the previous Republican nomination contestant, Ohio Governor John Kasich.

But the most important bit remains as noted above: the devision, the gap, the chasm that separates American voters by socio-demographic lines: "White non-college-educated voters are going two-to-one for Trump, 62 percent to 31 percent, according to the ABC News-Washington Post poll. College graduates favor Clinton by more than 20 points, 55 to 34 percent. For the first time in more than 50 years, whites with a college degree are voting Democratic, 51 to 38 percent."

That is right: American society is now divided to the point of mutual aversion across the education line. And this is something that the next President will have to live with and deal with. Given that Hillary Clinton is failing to energize her own core constituency, what chance does she have in energizing two disparate demographics into finding a reconciling common ground? Recall that Hillary Clinton readily and cheerfully labeled a large strata of the American majority "as a “basket of deplorables . . . racist, sexist, homophobic, xenophobic, Islamophobic – you name it.”" Not a hell of a lot of confidence in her ability to heal the nation can be glimpsed from this statement.

And, as the author concludes: "Each of the last four presidents – George H.W. Bush, Bill Clinton, George W. Bush and Obama – promised to bring the country together. They all failed. There is little prospect that either Clinton or Trump – two of the most divisive figures in U.S. politics – can heal the divide. Two Americas, two interpretations."

And that sad prospect is way more significant, more important than the actual outrun of the November 8 vote.

My interview with ItalVideoNews’ Concetto La Malfa about Brexit and the US Elections:
https://alternativeeconomics.co/tubeline/#/view/PuaUax7A1sc. 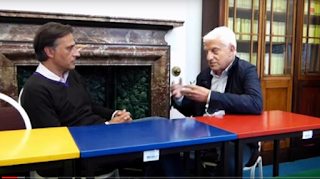