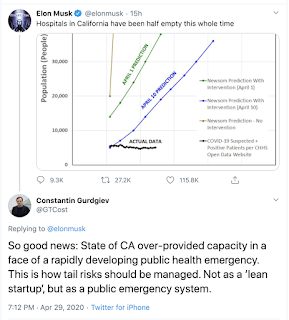 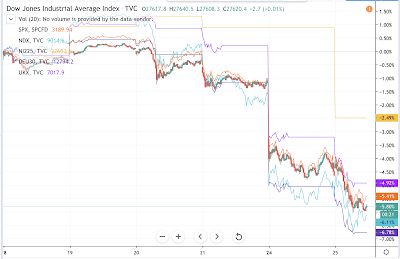 And it sure does look like a massive selloff.

Still, hysteria aside, no one is considering the simple fact: the markets have been so irrationally priced for months now, that even with the earnings being superficially inflated on per share basis by the years of rampant buybacks and non-GAAP artistry, the PE ratios are screaming 'bubble' from any angle you look at them. 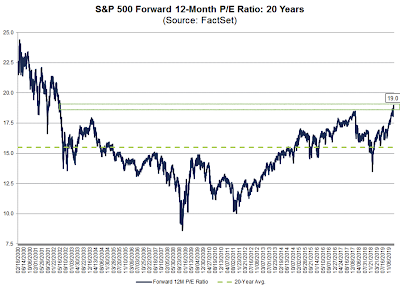 So, about that 'Dow is 5.8% down in just five days' panic: the real Black Swan is that it takes a coronavirus to point to the absurdity of our markets expectations.

In my recent article for The Currency I wrote about the expected market effects of the 2019-nCov coronavirus outbreak: https://www.thecurrency.news/articles/8490/constantin-gurdgiev-pandemics-panics-and-the-markets.

While past pandemics are not a direct nor linear indicators of the future expected performance, the logic and the dynamics of the past events suggest that while the front end short term effects of pandemics on the economies and the markets can be significant, over time, rebounds post-pandemics tend to fully offset short run negative impacts.

Key conclusions from the article are:

One clearly cannot deal with all of it, so I am going to occasionally dip into the topic with some comments. These are not systemic in any way.

The theory of 'Black Swan' events was introduced by Nassin Taleb in his book “Black Swan
Theory”. There are three defining characteristics of such an event:


Let's take a look at the Brexit vote in terms of the above three characteristics.

Analysis post-event shows that Brexit does indeed conform with point 1, but only partially. There is a lot of noise around various explanations for the vote being advanced, with analysis reaching across the following major arguments:

The multiplicity of often overlapping reasons for Brexit vote outcome does imply significant complexity of causes and roots for voters preferences, but, in general, 'easy' explanations are being advanced in the wake of the vote. They are neither correct, nor wrong, which means that point 1 is neither violated nor confirmed: loads of explanations being given ex post, loads of predictions were issued ex ante.
The Brexit event is likely to have a significant impact. Short term impact is likely to be extremely large, albeit medium and longer term impacts are likely to be more modest. The reasons for this (not an exhaustive list) include:
These expected impacts were visible pre-vote and, in fact, have been severely overhyped in media and official analysis. Remember all the warnings of economic, social and political armageddon that the Leave vote was expected to generate. These were voiced in a number of speeches, articles, advertorials and campaigns by the Bremainers.
So, per second point, the event was ex ante expected to generate huge impacts and these potential impacts were flagged well in advance of the vote.
The third ingredient for making of a 'Black Swan' is unpredictable (or low predictability) nature of the event. Here, the entire thesis of Brexit as a 'Black Swan' collapses.
Let me start with an illustration: about 18 hours before the results were announced, I repeated my view (proven to be erroneous in the end) that 'Remain' will shade the vote by roughly 52% to 48%. As far as I am aware, no analyst or media outfit or /predictions market' (aka betting shop) put probability of 'Leave' at less than 30 percent.
Now, 30 percent is not unpredictable / unexpected outcome. It is, instead, an unlikely, but possible, event.
Let's do a mental exercise: you are offered by your stock broker an investment product that risks losing 30% of our pension money (say EUR100,000) with probability of 30%. Your expected loss is EUR9,000 is not a 'Black Swan' or an improbable high impact event, but instead a rather possible high impact event. Conditional (on loss materialising) impact here is, however, EUR30,000 loss. Now, consider a risk of losing 90% of your pension money with a probability of 10%. Your expected loss is the same, but low probability of a loss makes it a rather unexpected high impact event, as conditional impact of a loss here is EUR90,000 - three times the size of the conditional loss in the first case.
The latter case is not Brexit, but is a Black Swan, the former case is Brexit-like and is not a Black Swan event.
Besides the discussion of whether Brexit was a Black Swan event or not, however, the conditional loss (conditional on loss materialising) in the above examples shows that, however low the probability of a loss might be, once conditional loss becomes sizeable enough, the risk assessment and management of the event that can result in such a loss is required. In other words, whether or not Brexit was probable ex ante the vote (and it was quite probable), any risk management in preparation of the vote should have included full evaluation of responses to such a loss materialising.
It is now painfully clear (see EU case here: http://arstechnica.co.uk/tech-policy/2016/06/brexit-in-brussels-junckers-mic-drop-and-political-brexploitation/, see Irish case here: http://www.irishtimes.com/news/politics/government-publishes-brexit-contingency-plan-1.2698260) that prudent risk management procedures were not followed by the EU and the Irish State. There is no serious contingency plan. No serious road map. No serious impact assessment. No serious readiness to deploy policy responses. No serious proposals for dealing with the vote outcome.
Even if Brexit vote was a Black Swan (although it was not), European institutions should have been prepared to face the aftermath of the vote. This is especially warranted, given the hysteria whipped up by the 'Remain' campaigners as to the potential fallouts from the 'Leave' vote prior to the referendum. In fact, the EU and national institutions should have been prepared even more so because of the severely disruptive nature of Black Swan events, not despite the event being (in their post-vote minds) a Black Swan.