As I have noted on Twitter and in comments to journalists, Brexit has catalysed investors' attention on weaker banking systems. As opposed to the UK banks, that are doing relatively well, given the circumstances, the focal point of the Brexit fallout is now Italian banking system, saddled with excessively high non-performing loans risks and with assets base that is, frankly, toxic, given their exposure to Italian debt and corporates. 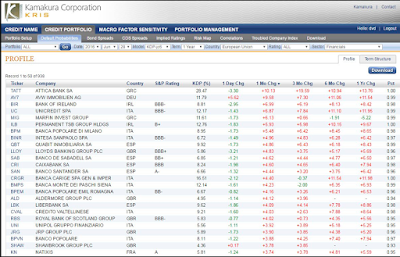 Nine out of twenty five top European financial institutions suffering massive increases in default probabilities over the last 30 days and 90 days are Italian, followed by five Spanish ones. Of five UK institutions on the list, only two are sizeable players worth worrying about.

Not surprisingly, as reported by the WSJ (link here) the EU Commission has approved, quietly and discretely, over Sunday last, use of Italian government guarantees "to provide liquidity support to its banks, ...disclosing the first intervention by a European Union government into its banking system following the U.K. vote to leave the EU." The programme includes EUR150 billion in Government guarantees and is supposed to ease the short term concerns about Italian banks that, based on Italian officials estimates will require some EUR40 billion of new capital.  No one quite has any idea who on earth will be supplying capital to the banks heavily weighted by high NPLs, burdened with massive fallouts in equity valuations and faced with low returns on their 'core' assets (especially Government bonds).

As WSJ notes: "Italian banks have lost more than half of their market capitalization since the beginning of the year, as investors fret about some EUR360 billion in bad loans still logged on their balance sheets. That drop in market value compares to an average decline of less than one third for European lenders. Some Italian banks have seen their shares plummet by some 75% in the first half of the year." Anyone looking into buying into their capital raising plans needs to have their heads examined.

Of course, we know that there is only one ready buyer for the Italian banks 'assets' - the Italian state. Back in April this year, Italy announced the creation of the Atlante fund, designed to "buy shares in Italian lenders in a bid to edge the sector away from a fully-fledged crisis".

As noted in an FT article (link here): "the fund... can also buy non-performing loans." The background to it is that "Italian banks have made €200bn of loans to borrowers now deemed insolvent, of which €85bn has not been written down on their balance sheets. A broader measure of non-performing debt, which includes loans unlikely to be repaid in full, stands at €360bn, according to the Bank of Italy. So is Atlante — with about €5bn of equity — really enough to keep the heavens in place?"

Sh*t no. Not even close to being enough. Which means the State is now fully hooked in banks risks. As the FT article details, the idea is that the Italian Government will buy lower-seniority tranches of securitised trash [sorry: assets] at knock-down prices, leaving senior tranches to private markets. In other words, the Italian Government will spend few billion euros borrowed from the markets to subsidise higher valuations on senior tranches of defaulting loans.

An idea that such schemes are anything other than Italian taxpayers throwing cash at the burning building of the country banking system is naive. Despite all the European assurances that the next bailout will be 'different', it is clear that little has changed in Europe since the days of 2008.