Related to the earlier post on investment markets composition by intermediary (see: https://trueeconomics.blogspot.com/2019/06/12619-investment-intermediaries-europe.html), here is more evidence, via @jerrycap of the massive share of intermediated debt / banks dependency in European markets: 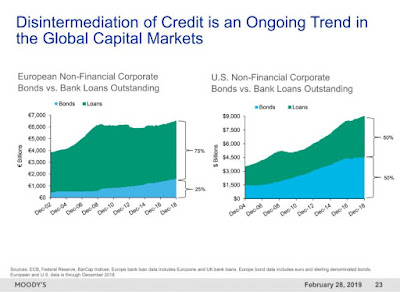 A caveat worth noting: European data includes the UK, where equity markets and hybrid financing are both more advanced than in the Continental Europe, which suggests that the share on non-bank share of debt markets is even smaller than the 25% currently estimated.

Investment markets intermediaries by type and origin (via @schuldensuehner): 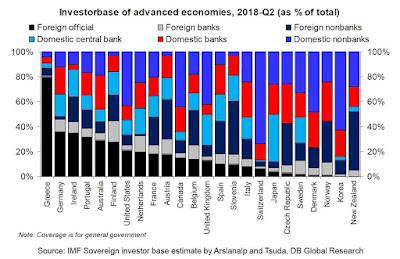 Caveat: In the case of Ireland and Switzerland, the data is not representative of the domestic markets.

Loads of interesting insights, but one macro-level important is the role of the non-banking investment players, especially domestic ones, in the economies of the U.S. and Germany, Italy, Spain and France. This highlights the huge role of direct investment channels (equity, debt, hybrids) in the U.S. market and the corresponding weight of intermediated bank debt in Europe. We highlight this anomaly and the failures of the EU to diversify capital funding channels

Instead of whingeing about the banks' plight, we should focus on the banks' resound failures and stop giving custom to the patrician incumbents. Let competition restructure Europe's banking sector. The only thing that sustains Europe's banks today is national- and ECB-level regulatory protectionism that contains competition within the core set of banking services. It is only a matter of time before M&As and organic build up of fintech players will blow this cozy cartel up from the inside. So regulators today have two options: keep pretending that this won't happen and keep granting banks a license to milk their customers and monetary systems; or open the hatches and let the fresh air in.