Couple of older, but still relevant notes have stacked up on my virtual desktop over the last few weeks. Catching up with these, here is a post on the banking sector 'bill of un-health' produced this summer by the EBA.


European banks street tests conducted by EBA last month combined the usual old farce with the novel new farce. Just to make sure the punters were not too scared of the European economy’s champions.

Based on Basel III criteria - CT1 ratio of 7% post shock - all but two banks (Italy’s Banca Monte dei Paschi di SAiena Spa and Austria’s Raiffeisen Zentralbank) have managed to escape the tests with CT1 ratios post-shock within the Basel III parameters. Or in other words, everyone passed, save for two who didn’t. Systemically, therefore, EBA can assure us all that euro area banking is just fine. Nothing to see, nothing to worry about. 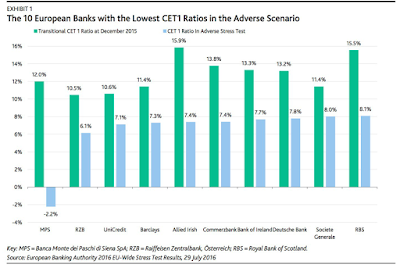 However, the farce of the tests goes deep than this predicable and historically conditioned outcome. Because this time around, EBA no longer even bothered with determining who ‘failed’ and who did not. Like in Breznev’s USSR, in the EBUSSR, ‘friendship wins’ and ‘no one loses’.

There was another predictable trend in the EBA results. No matter how ‘flexible’ the models fort testing get, no matter how being the ‘stress assumptions’ get, Irish and Italian banks remain the sickest puppies in the entire ward of already not too healthy ones: 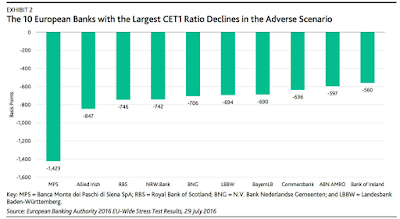 But, hey, despite much of the stock markets hullaballoo over recent months, the bidding of banks’ equity has not really done much in terms of beefing sufficiently their capital buffers. So here are some comparatives on 2014 stress tests against current ones.

Note: 2014 stress tests estimated impact of a shock out to 2016, while this year tests are estimating impact out to 2018.


FT did provide a handy chart showing changes in stress test shock-level CET1 ratios for Adverse Stress Scenarios in 2014 tests and 2016 tests (never mind the ‘actual’ levels as of 2015, as these are subject to market valuations etc). 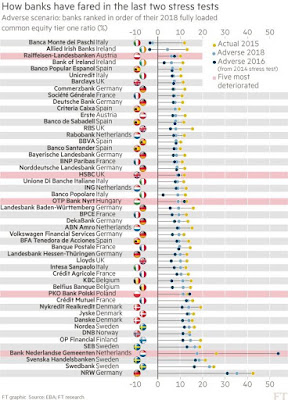 What the above shows?

For a tiny banking system, Ireland’s one is sicker than any other. And this comes on foot of years of repairs, recapitalisations, arrears resolutions etc etc etc. Green Jerseying ain’t working, folks. All Spanish banks are performing better than the two Irish flagships. Majority of Italian banks (save for one) are better than the two Irish ‘giants’. All Portuguese banks are stronger than the Irish systemically-important institutions. And none have spent anything close to Ireland on ‘repairing’ their lenders.

Maybe, if we wait long enough, EBA will include a bunch of Greek and Cypriot banks next… to make ours look better…

My comment for Euromoney on banking sector risks: http://www.euromoney.com/Article/3574602/Europes-bank-stability-is-in-question-say-country-risk-experts.html. 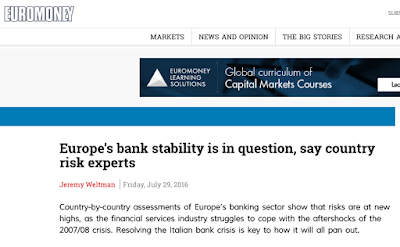