Of course, readers of this blog would have known as much by now.  Almost 2.5 years ago I wrote about research by Claudio Borio of BIS on the same topic (see http://trueeconomics.blogspot.com/2015/05/8515-bis-on-build-up-of-financial.html) and Borio's findings are linked to his own earlier work on excess financial elasticity hypothesis (see http://trueeconomics.blogspot.com/2011/11/07112011-dont-blame-johnny-foreigner.html).
So while the DB 'research' simply replicates the findings of others who paved the way, it does present a nice picture of the amplified nature of financial crises in recent decades, both in terms of timing/frequency and in terms of impact.
Claudio Borio and his team at the Bank for International Settlements have just published another interesting working paper, titled “Monetary policy, the financial cycle and ultra-low interest rates” (BIS Working Papers No 569 by Mikael Juselius, Claudio Borio, Piti Disyatat and Mathias Drehmann Monetary and Economic Department July 2016).


In the paper, the authors ask whether “the prevailing unusually and persistently low real interest rates reflect a decline in the natural rate of interest as commonly thought?”

The authors “argue that this is only part of the story. The critical role of financial factors in influencing medium-term economic fluctuations must also be taken into account.” In other words, the authors attempt to control for purely financial factors driving interest rates first, and then consider predominantly real economic variables-determined rates (natural rates).

You might think that the currently low rates are facilitating the real economy, right? If so, then actual observed (already low) rates today should be coincident with even lower ‘natural’ rates (if real economy drags down the financial economy). Alas, as the authors find: accounting for the different sources of pressure on the interest rates (financial vs natural), in the case of the United States, “yields estimates of the natural rate that are higher and, at least since 2000, decline by less.”

Oops… so persistently low interest rates today are below natural rates and reflect the needs of the financial intermediation sector. 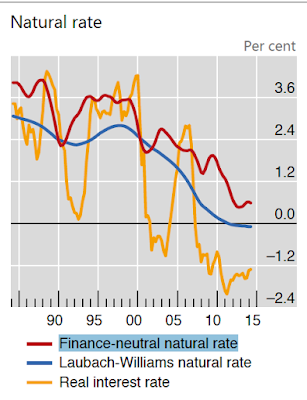 Notice the difference between the observed rates (yellow) and the ‘natural rates’ (red). Or as the lads from BIS put it: “As a result, policy rates have been persistently and systematically below this measure.”

But never mind. With time, things should get rebalanced, as the authors also find that “monetary policy, through the financial cycle, has a long-lasting impact on output and, by implication, on real interest rates. Therefore, a narrative that attributes the decline in real rates primarily to an exogenous fall in the natural rate is incomplete. The influence of monetary and financial factors should not be ignored. Exploiting these results, an illustrative counterfactual experiment suggests that a monetary policy rule that takes financial developments systematically into account during both good and bad times could help dampen the financial cycle, leading to higher output even in the long run.” 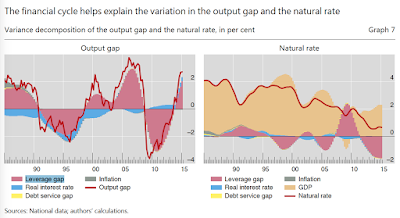 Leverage gap is defined as basically a credit to assets ratio for the economy - or how much credit does economy create per each unit of assets. Meanwhile debt service gap is the ratio of debt service payment, or more precisely, “the ratio of interest payments plus amortisations to income”.

To understand the dynamics of the monetary (interest rates) policy impact, the authors do a couple of experiments. The main one is worth discussing. The authors start with a leverage gap of -10%, so there is an excess of assets over credit in the economy and hence there is room to borrow, driving leverage gap up. Note: as the authors point out, the -10% leverage gap assumption is consistent with historical reality: in the late 80s and mid-2000s, “at their trough”, leverage gaps were -11% in 1987 and -20% in 2006 respectively.

So, as I noted above, “a negative leverage gap initially induces a credit boom that then turns into a bust… Initially, the negative leverage gap is followed by rapid credit growth, which in turn feeds into a positive, albeit small, increase in private sector expenditure. But as credit outgrows output, the credit-to-GDP ratio and with it the debt service gap start to rise, putting an increasing drag on output and asset prices. A severe and drawn-out recession follows.”

The dynamics match the Great Recession: “…at the start of 2005, the real-time estimate of the leverage gap was significantly negative while the debt-service gap was positive. Given this starting point, the adjustment dynamics of the system would have predicted much of the subsequent output decline during the Great Recession. This suggests that the recession was not a “black swan” caused by an exogenous shock but, rather, the outcome of the endogenous dynamics of the system – a reflection of the interaction between the financial factors and the
real economy.”

And here is the actual run of annual estimates of the two gaps: 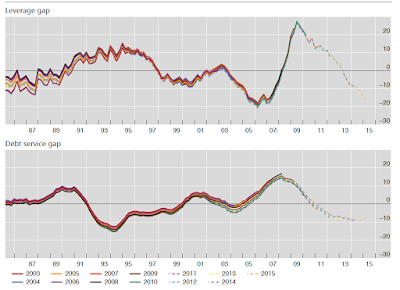 Good thing we are not going to repeat THAT cycle this time around, right?.. Not with all the low interest rates not being lower than ‘natural’ rate… right? 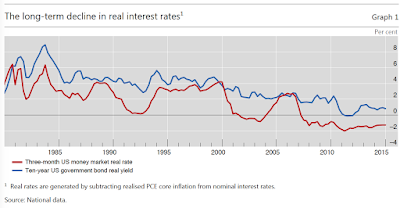