In my course on the enterprise and financial risk last semester, we talked about the peculiar (or idiosyncratic) nature of Italian firms across a number of matters:

Now, let’s add to that literature something new. A recent paper from the Banca d’Italia, titled “Investment and investment financing in Italy: some evidence at the macro level” by Claire Giordano, Marco Marinucci and Andrea Silvestrini (Banca d’Italia Occasional paper Number 307 – February 2016) looks at the evolution of the Global Financial Crisis and the Great Recession across the Italian economy in terms of credit fundamentals.

As noted by the authors, “following the outbreak of the global financial crisis, the euro area experienced a large fall in gross fixed capital formation, both in 2008-09 and during the sovereign debt crisis. This drop was dramatic in the countries more exposed to tensions in government bond markets. In Italy, in particular, total real investment has suffered a loss of around 30 per cent since 2007, the pre-crisis peak, reverting to its lowest levels since the mid-1990s. Weak investment also remained a key drag on GDP growth in 2014, although more recent quarterly data on capital accumulation point to a slight increase over the first three quarters of 2015 relative to the corresponding period in 2014.”

In a typical European fashion, investment in Italy must equal debt. In part, as I usually cover in my courses on risk and corporate financial strategies, this is tied to the reluctance of the family-owned firms to release equity. And in part, it is a part of a broader European debt disease. Independent of the reasons, per authors, the worthy corner to check for key investment-crises interlinkages is the credit supply.

“The depressed growth of investment is in contrast with the substantially muted aggregate financing costs, which stem from the low interest rate environment resulting from the strongly expansionary stance of monetary policy in the euro area. In this context, one scenario is that investment demand will remain too low to absorb financial savings, inducing a persistent state of an excess supply of funds in capital markets.” In other words, Italians are discovering secular stagnation: interest rates are too low because investment is too low (and may be, also the other way around).

With that in mind, the authors proceed to show that “medium-term gross fixed capital formation trends in Italy may be summarised along the following lines”:

Pre–2007 capital expansion “was broad-based, both across institutional sectors and asset categories, although less marked for households”, and Post-2007 “exceptional downturn …affected all sectors and components, yet to a different extent. In particular, focusing on the most recent period, the decline in general government and non-financial corporations’ expenditure, cumulatively undertaking about two thirds of total investment in Italy, was sizeable (approximately 25 per cent), yet slightly more contained than the concurrent drop in household investment spending.”

Overall, “the total-economy investment rate in Italy currently stands at its lowest levels since data became available in the mid-1990s; current government and non-financial corporation investment rates are comparable only to those recorded in 1995; the household rate is even lower. From the asset side, in recent years construction investment, in both residential dwellings and non-residential buildings, which represents half of total expenditure, was the hardest-hit item, excluding transport equipment expenditure (small and volatile), whereas ICT investment and the accumulation of intangible assets weathered the recent double-dip recession better.”

But the age of lower interest rates is having another impact on Italian credit markets. This impact is aggressive rolling over of maturing loans amidst deteriorating credit quality of borrowers. As the result, two things can be documented in Italian credit market experience since 2008 bust:

Firstly, overall, the trend toward longer debt maturity is present in household, corporate and government debt sectors (charts below). Secondly, this is doing nothing to repair credit quality on banks balance sheets. 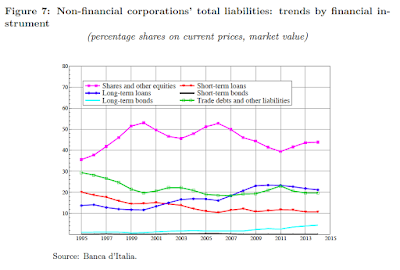 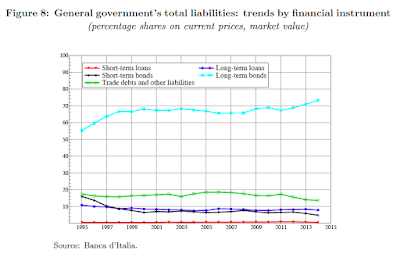 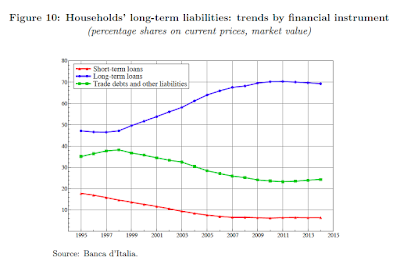 Which is rocking, for now, as low interest rates are keeping debt burden down and allowing leverage to rise. But the problem is that with longer maturity of debt, we are looking at higher long term susceptibility to debt servicing costs. Last time that happened, Italy became on of the PIIGS. Next time it will happen… oh, ok… we shall just wait and hope Mario Draghi says true to his Italian roots long enough for the miracle to happen.