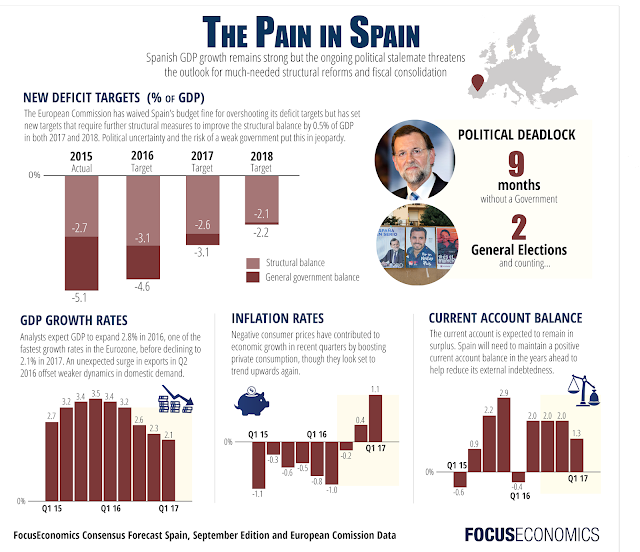 Click on the image to enlarge
A closer look at the political turmoil
Spanish parties are simply not used to formal coalition politics at central government level, and don’t seem to be willing to adapt to the times in a hurry. Since 1982, either one or other of the two main parties, the conservative PP and the Socialist Party (PSOE), had always managed to form either a majority government or alternatively a strong minority government, in the latter case achieving working majorities by striking mutually beneficial deals with regionally-based nationalist parties—especially in the Basque Country and Catalonia—to secure their support in the Spanish Parliament (a classic case of “I’ll scratch your back if you scratch mine”). Neither party was prepared for two quite successful newcomers—the populist left-wing Podemos (“We Can”) and the centre-right Citizens party (C’s)—coming along to break up their longstanding dominance, at the same time as the pro-independence wave in Catalonia makes reviving the traditional mutual support arrangements with the Catalan nationalist parties impossible.
The re-run elections held on 26 June have so far simply resulted in another stalemate. The PP won again and this time managed to increase its seats from 123 to 137, but it still fell far short of an absolute majority of seats (176) in Spain’s Parliament. The only plausible option for Rajoy in the circumstances is to form a minority government, since both the PSOE and C’s ruled out the possibility Rajoy had initially advocated of a “grand coalition” comprising the PP, the PSOE and potentially C’s too—an option which market participants had considered the most likely to deliver the structural reforms Spain needs, but which would not have provided the “government of change” that so many Spanish citizens voting for new parties seek. Rajoy had managed to reach an agreement with C’s (32 seats) for it to support his investiture attempts on 31 August and 2 September, as well as the commitment of the one MP from the Canary Coalition (CC) to do the same, but he failed to secure the 11 abstentions he would also have needed to be voted in on the second attempt with a simple majority. This would have required some of the PP’s arch rival the PSOE to abstain, and PSOE leader Pedro Sánchez remains absolutely adamant that his party will continue to vote against Rajoy instead. Sánchez is in a weak position since the PSOE declined at the re-run elections and is under pressure from Unidos Podemos (an electoral coalition between Podemos, the United Left party and some other smaller left-wing forces), so he is not in a strong position to try and form a government himself, but he does not want to lose yet more voters to Unidos Podemos by being seen to allow or to prop up a conservative government either. It looks like only an internal crisis within the PSOE could possibly change the circumstances.
There is an outside chance that Rajoy could attempt an investiture vote again after the Basque regional elections on 25 September, if it looks like he might be more likely to get the Basque Nationalist Party (PNV)—which has 5 seats in the Spanish Parliament—on board then, to continue to boost his numbers and up the pressure on the PSOE to deliver the final few abstentions. The only plausible circumstance in which the PP might stand any chance of getting the PNV on side is if, after the Basque regional elections, the PNV itself finds it needs the PP’s support to be able to govern in the Basque region. This is not totally beyond the realm of possibility, since the PNV is likely to win the Basque elections with a minority of votes and could struggle to form a working majority, especially if its traditional ally, the Basque Socialist party (PSE)—the Basque federation of the PSOE—declines as expected amid the rise of Podemos, which could potentially build alliances with other left-wing forces including the Basque anticapitalist and secessionist EH Bildu coalition of parties. Podemos is proving particularly attractive in the Basque Country (and Catalonia too) given that it is the first Spanish party to support the idea of self-determination for Spain’s constituent territories. Indeed, the PNV itself, a traditionally centre-right party which is struggling to attract the younger generations of Basque voters, is far from immune to the risk of losing some of its voters to the populist party: at the Spanish general election re-run in June, it was significant that Unidos Podemos beat the PNV not only in terms of votes but also seats in the PNV’s traditional Basque stronghold of the province of Vizcaya (one of the three provinces making up the Basque region). In these changing circumstances, the PNV could possibly end up needing the support of the PP in the Basque Parliament in order to govern, which would inevitably require it to return the favour in the Spanish Parliament, but this is only one of various possible outcomes at this stage and the PNV certainly looks highly unlikely to contemplate this option as anything but a very last resort.
Summing up
Overall, the political impasse thus looks set to continue for the foreseeable future—though if we’re looking for silver linings, at least Spain’s nearly nine-month hiatus is still nowhere near Belgium’s 2011 record of 19 months without a government. Spain faces unprecedented challenges as it undergoes a fundamental political transformation stemming from the widespread disillusionment with existing political institutions and actors and the emergence of new players, not to mention the territorial crisis due to the Catalan challenge to the integrity of the Spanish state. While Spain’s GDP growth has remained remarkably resilient in recent quarters, there is no room for complacency. The country’s persistent structural deficit—which cannot be effectively addressed during the current political deadlock—still renders its economy particularly vulnerable to future changes in economic climate and puts the country on a collision path with Brussels over the required fiscal consolidation trajectory.
Author: Caroline Gray, Senior Economics Editor, FocusEconomics