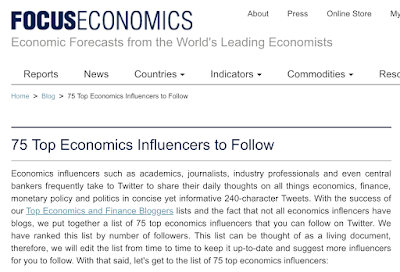 Honoured to be in the company of some really inspiring people talking about economics, economic policy and research!

My post on economic outlook for 2019 is now available from the Focus Economics: https://www.focus-economics.com/blog/constantin-gurdgiev-thoughts-on-the-global-economy-for-2019 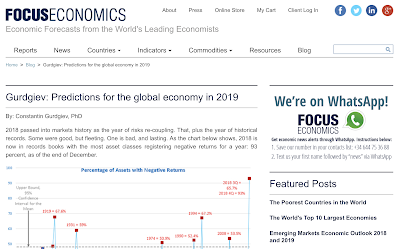 My post on economic outlook for 2019 is now available from the Focus Economics: https://www.focus-economics.com/blog/constantin-gurdgiev-thoughts-on-the-global-economy-for-2019

FocusEconomics top economics and finance blogs roll list for 2018 is out https://www.focus-economics.com/blog/top-economics-finance-blogs-of-2018, with TrueEconomics taking a spot on the list once again: 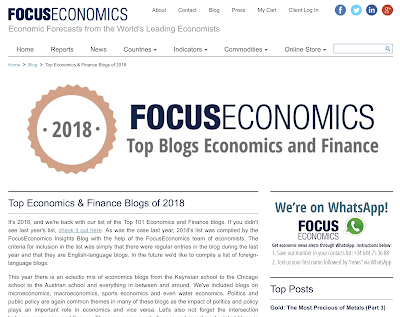 Focus Economics posted a neat and timely blog post on the topic of potential economic impacts of mass forced migration that has been sweeping across Europe in recent years, driven by the civil war in Syria and botched 'democratization' efforts in Iraq and Afghanistan, as well as the less-discussed dismantling of Libya.

In my opinion, the key here is the following issues:

"In the longer term, the picture becomes far murkier. This isn’t just because little is known about the current cohort of refugees, such as their average level of education or how long they will remain in their host countries. It is also because the long-term economic impact of refugees rests largely on how successful countries are at weaving them into the economic fabric of their societies."

Yes, long term viability of all positive assessments of the current migration crisis is questionable. And the problem rests on both sides, the migrants' quality of human capital, and the host countries quality of labor markets.

End result, so far, is that history offers only ominous assessments of the success rates that can be achieved in integrating refugees into active members in the host societies. "If past experience is anything to go by, the full economic integration of refugees will prove an arduous task. Studies from many developed countries have repeatedly shown that refugees tend to earn less, have worse employment prospects and hold lower occupational status than native workers or economic migrants. Even in Sweden, a country with a relatively strong track record of integrating refugees, a study of those arriving between 1997 and 2010 found that fewer than 20% had found employment after one year. Ten years down the line, only between 50% and 60% were working, significantly below the corresponding figure for Swedish natives."

This is not to say that attempts to integrate refugees are a waste of scarce resources. Quite to the contrary, both humanitarian and socio-economic dimensions of the current crisis suggest that we should be doing more (and doing it better) to develop policies and institutions to provide refugees with more open and more efficient access to work-related training, language skills acquisition and general education, including avenues to complete unfinished degrees and pursue higher degrees. As the  Focus Economics post stresses, positive incentives and pro-active systems for engagement should be put forward. One question, however, remains unasked and unanswered, as is common with this analysis: what should be done to identify early and correct any negative choices that some of the refugees might make following their arrival in the host societies. While we have an idea as to how we can help those who want to integrate (note: having an idea is yet to translate into deploying actual policies), we don't really have a good understanding as to how we can prevent adverse choices. 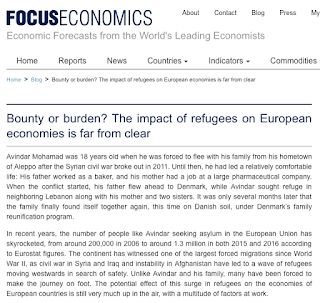