In recent years, there has been lots and lots of debates, discussions, arguments and research papers on the perennial topic of fiscal stimulus (aka Keynesian economics) on the recovery. The key concept in all these debates is that of a fiscal multipliers: by how much does an economy expand it the Government spending rises by EUR1 or a given % of GDP.

Surprisingly, little of the debate has focused on a simple set of environmental factors: fiscal stimulus takes place not in a vacuum of environmental conditions, but is coincident with: (a) economies in different stages of fiscal health (high / low deficits, high/low debt levels etc) and (b) economies in different stages of business cycle (expansion or contraction). One recent paper from the World Bank decided to correct for this glaring omission.

“Do Fiscal Multipliers Depend on Fiscal Positions?” by Raju Huidrom, M. Ayhan Kose, Jamus J. Lim and Franziska L. Ohnsorge (Policy Research Working Paper 7724, World Bank) looked at “the relationship between fiscal multipliers and fiscal positions of governments” based on a “large data-set of advanced and developing economies.” The authors deployed methodology that “permits tracing the endogenous relationship between fiscal multipliers and fiscal positions while maintaining enough degrees of freedom to draw sharp inferences.”

“First, the fiscal multipliers depend on fiscal positions: the multipliers tend to be larger when fiscal positions are strong (i.e. when government debt and deficits are low) than weak.” In other words, fiscal expansions work better in case where sovereigns are in better health.

By strong/weak fiscal position, the authors mean low/high sovereign debt to GDP ratio. And they show that fiscal expenditure uplift for higher debt ratio states results in economic waste (negative multipliers) in pro-cyclical spending cases (when fiscal expansion is undertaken at the times of growing economy). Which is important, because most of the ‘stimuli’ take place in such conditions and majority of the arguments in favour of fiscal spending increases happen on foot of rising economic growth (‘spend/invest while you have it’).

“Second, these effects are separate and distinct from the impact of the business cycle on
the fiscal multiplier.” Which means that debt/GDP ratio has an impact in terms of strengthening or weakening fiscal policy impact also regardless of the business cycle. Even if fiscal expansion is counter-cyclical (Keynesian in nature, or deployed at the time of a recession), fiscal multipliers (effectiveness of fiscal policy) are weaker whenever the debt/GDP ratio is higher. In a way, this is consistent with the issues arising in the literature examining effects of debt overhang on growth.

“Third, the state-dependent effects of the fiscal position on multipliers is attributable to two factors: an interest rate channel through which higher borrowing costs, due to investors’ increased perception of credit risks when stimulus is implemented from a weak initial fiscal position, crowd out private investment; and a Ricardian channel through which households reduce consumption in anticipation of future fiscal adjustments.” 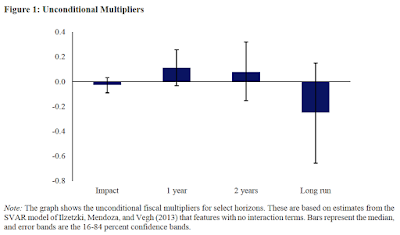 Once you control for debt/GDP position with stimulus taking place during recessions:

“Note: The graphs show the conditional fiscal multipliers during recessions for different levels of fiscal position at select horizons… Government debt as a percentage of GDP is the measure of fiscal position and the values shown on the x-axis correspond to the 5th to 95th percentiles from the sample. …Fiscal position is strong (weak) when government debt is low (high). Solid lines represent the median, and dotted bands are the 16-84 percent confidence bands.”

Overall, the paper is important in: (1) charting the relationship between fiscal policy effectiveness, and debt position of the sovereign; (2) linking coincident fiscal and monetary expansions to weaker private investment; and (3) showing that in the long run, fiscal expansion has serious costs in terms of growth and these costs are more pronounced for countries with higher debt levels. Now, about that idea that Greece, or the rest of PIGS, should run up public investment to combat growth crisis…