Russian Services PMI for January 2016 came in with a hugely disappointing reading, falling to 47.1 from already poor 47.8 recorded in December. Per Markit: “This fall was driven by a solid contraction in new business levels, leading to another deterioration in backlogs of work. Meanwhile, job shedding persisted throughout the sector as firms turned pessimistic towards their future outlook for activity. Input prices continued to rise at a much quicker pace than average charges.”

On a 3mo average basis, the index is now at 48.2, worse than already poor 49.4 average for the 3 months through October 2015, although, as expected - well above the abysmal 44.7 average for the 3mo period through January 2015. Just how bad the current 3mo average and the latest monthly index reading is? Historical average for Russian services PMI is at 55.0 - full 7.9 points ahead of January reading.

Bad news is that the Services sector contraction has now accelerated (on both monthly basis- for the second consecutive month) and on 3mo basis too.

Again, per Markit: “Operating conditions in the sector remained challenging… Down from 47.8, the latest reading signalled the quickest decline in output for ten months.” 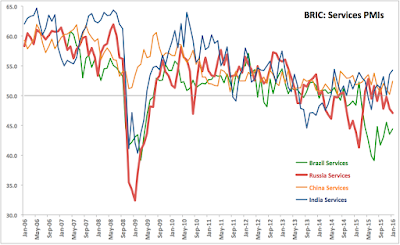 Meanwhile, Russia’s Composite Output Index remained in contraction territory in January, posting a reading of 48.4, up on 47.8 in December 2015. The Composite index was helped to the upside by the Manufacturing PMI which was also in a contractionary territory at 49.8, but above the horror show of Services PMI. January marked second consecutive month that both Manufacturing and Services PMIs for Russia were below 50.0. last time that this happened was in December 2014-January 2015 and in February-March 2015 - in other words, at the dire depth of the current crisis.

Per Markit, “the rate at which incoming new orders contracted [for Services providers] was the fastest since March 2015, with anecdotal evidence linking this to a lack of market demand. That said, Russian manufacturers reported a slight expansion in incoming new orders in January, having registered a decline in December.”

Overall, Russia is once again (second month in a row) ranks as the second lowest BRIC performer in terms of Composite PMI reading, ahead of only a complete basket case of Brazil. More on this to come, so stay tuned.
Russian Manufacturing PMI rebound in January compared to December slump, rising from 48.7 in December (the lowest reading since August 2015, to 49.8. Still, January reading was nominally below 50.0, signalling second consecutive month of contraction in country manufacturing activity. In statistical significance terms, January reading is basically singling zero growth.

Per Markit, this means that “Russian manufacturing sector edgeed closer to stability during the first month of 2016” with “both output and incoming new orders return to growth territory”. However, overall, “survey data for the first month of 2016 remained disappointing for Russian manufacturers, as the sector stayed in contractionary territory. Although there were marginal increases in volumes of both production and incoming new orders, job shedding was still evident. Meanwhile, average cost burdens increased at a marked pace, while a more moderate rise in output charges was reported”.

On sectoral basis,”production volumes grew at Russian goods producers during January, having contracted in the final month of 2015. Anecdotal evidence suggested the expansion in output was linked to an increase in
incoming new orders. Job cuts were still evident in the manufacturing sector of Russia in January, continuing a trend that began in July 2013. The rate of job shedding accelerated to a four-month high and was solid overall.”

All of the expansion in new orders was contained within domestic economy, “as new export orders contracted. Falling new business from abroad has been reported in every month since September 2013.” 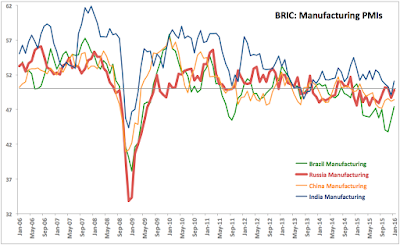 As shown above, Russia retained its's position as the second strongest performing economy by Manufacturing PMIs in the BRIC group. 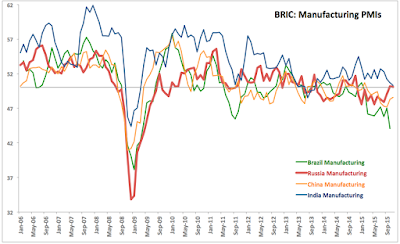 from Markit release: "production and new business both recorded mild declines. Employment also fell, but at a weaker rate with consumer goods producers recording modest growth. There was some positive news on the inflation front, as input and output prices continued to rise, but to much slower degrees than seen at the start of the year".

Overall trend toward deepening contraction in the Manufacturing remains: 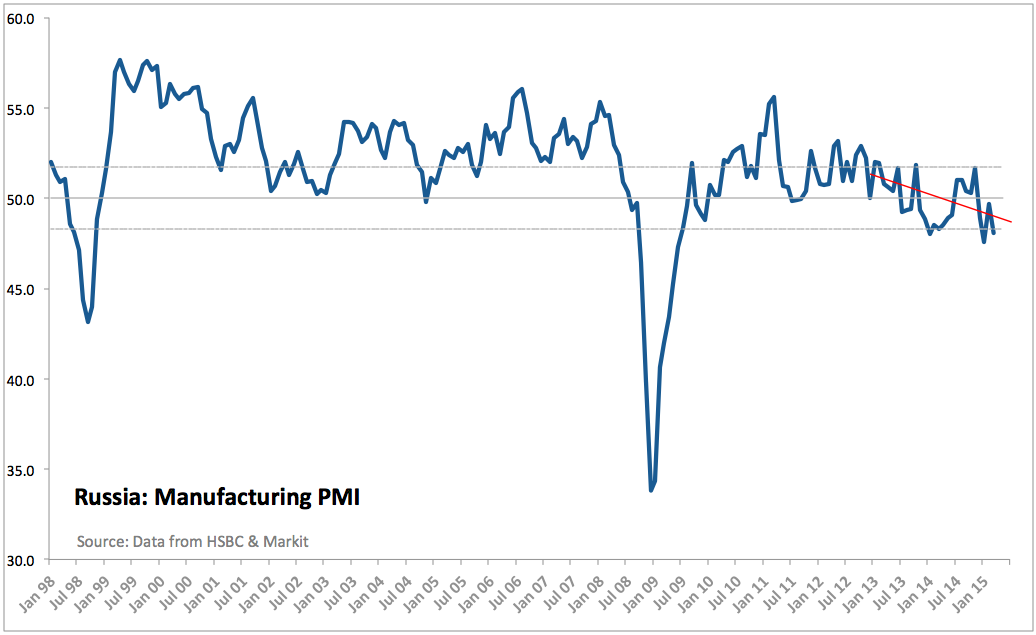 As reminder, Russian Manufacturing PMIs first slipped below 50 in July 2013 and remained below 50 in 15 months out of the last 21 months.