It was my pleasure, recently, to record a podcast with excellent Tony Groves @Trickstersworld . The link to the podcast is here: http://www.broadsheet.ie/2017/11/14/the-road-ahead/. Enjoy! 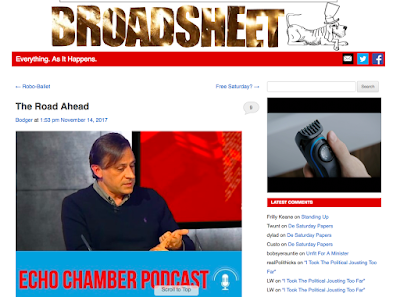 What really separates science from pseudoscience?

At its core, the main difference between a legitimate scientific endeavor and a pseudoscientific one comes down to the goals of the people engaged in each activity. Our checklist for how to detect junk science in fact leads with that category.

Today's example of junk science shows the kind of innumeracy that can result when a nonprofit organisation concerned with where the threshold for poverty should be drawn puts its ideological, cultural and commercial goals ahead of objectively verifiable reality. Let's plunge straight in, shall we?

We've kept something of a wary eye on the Joseph Rowntree Foundation's ruminations on poverty over the years. Near a decade back they started that idea of the living wage. Ask people what people should be able to do if they're not in poverty. Along the lines of Adam Smith's linen shirt example. So far so good - but it was a measure of what is it that, by the standards of this time and place, people should be able to do and not be considered to be in poverty.

In this latest report of theirs they are saying that if the average family isn't on the verge of paying 40% income tax then they're in poverty.

This is not, we submit, a useful or relevant measure of poverty. But it is the one that they are using. Here is their definition:

In 2008, JRF published the Minimum Income Standard (MIS) – the benchmark of minimum needs based on what goods and services members of the public think are required for an adequate standard of living. This includes food, clothes and shelter; it also includes what we need in order to have the opportunities and choices necessary to participate in society. Updated annually, MIS includes the cost of meeting needs including food, clothing, household bills, transport, and social and cultural participation.

JRF uses 75% of MIS as an indicator of poverty. People with incomes below this level face a particularly high risk of deprivation. A household with income below 75% of MIS is typically more than four times as likely to be deprived as someone at 100% of MIS or above. In 2016, a couple with two children (one pre-school and one primary school age) would need £422 per week to achieve what the public considers to be the Minimum Income Standard, after housing and childcare costs. A single working-age person would need £178 per week

Having an income that is just 75% of these amounts –£317 for the couple and £134 for the single person – is an indication that a household’s resources are highly likely not to meet their needs. The further their incomes fall, the more harmful their situation is likely to be.

So that's £16,500 a year for the high risk of deprivation and £22,000 a year for poverty. But note (this for the average family, two plus two) that this is disposable income after housing and childcare costs. We must add those back in to get the other definition of disposable income, the one that ONS uses.

That's therefore £38,500 a year or £44,000 a year in actual consumption possibilities for such a family. That higher number marks poverty, the lower potential deprivation.

As ONS tells us (and this is disposable income, after tax and benefits, before housing and childcare) median household income in the UK is:

And do note that ONS definition:

Disposable income is the amount of money that households have available for spending and saving after direct taxes (such as income tax and council tax) have been accounted for. It includes earnings from employment, private pensions and investments as well as cash benefits provided by the state.

To put this another way, a British family in the top 0.23% of the global income distribution for  an individual is in poverty and one in the top 0.32% of that global distribution is deprived. Yes, after adjusting for price differences across countries.

This simply is not a valid manner of trying to define poverty.

Using a slightly different measure of the global income distribution, the following chart puts several of these figures into some perspective. 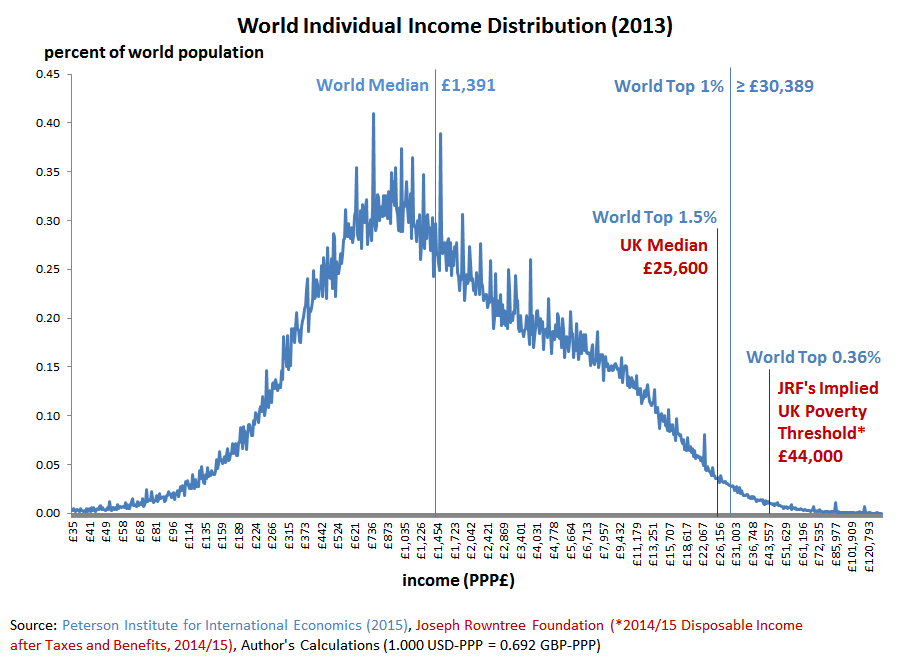 We see that even though half of the UK's population finds itself in the Top 1.5% of the global income distribution just based on their disposable income, many would still be considered to be in poverty according to the JRF's unique definition of that condition. The JRF is however pressing forward with their absurd definition because they appear to believe that doing so will advance their ideological, cultural and commercial policy goals further than what they would be able to achieve if they were to instead anchor their definition of the UK poverty threshold more credibly as 60% of median income.

And so we find that their pursuit of their political agenda on that basis is really advancing pseudoscience. And vice versa, since it would appear to be a mutualistic relationship.

Joseph Rowntree Foundation. We Can Solve Poverty in the UK: A Strategy for governments, businesses, communities and citizens. [PDF Document]. 6 September 2016.