The Observer used to be a fine campaigning newspaper, although it has become a little subsumed within its Guardian embrace in recent years.  Nevertheless, its editorial today provides the best, most vigorous response yet not only to the anti-High Court hysteria of last week, but also of the wider threat posed by a constitutionally blind right-wing movement across Europe.

In its dissection of the British constitution and its evolution, the editorial provides AS politics students with a masterly and concise overview.

In its attack on "the lie factories of Fleet Street", it offers a well executed broadside against the lethal exercise of power without responsibility that the mainstream press still has.

In its defence of the role of parliamentary sovereignty, it offers an articulate case for the virtues of that particular system.

In its linkage to the wider world of right-wing political extremism, from Donald Trump to the authoritarian clampdown of Turkey's President Erdogan, it offers a timely warning against the siren voices of the anti-liberals in our own country.

Finally, whether you agree with it or not, it offers a cogent critique of Theresa May's premiership so far - a premiership not yet affirmed by any general election result.

Today's Observer editorial is both a great campaigning piece and a well-articulated argument about our body politic that can be recommended to any reader, and certainly to the AS student in search of further, well-informed, debate. 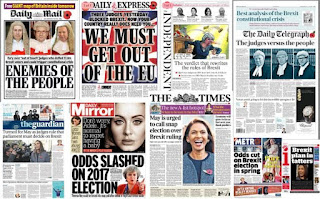 It was a commonplace amongst Brexit campaigners that they wanted a return to the sovereignty of the British parliament.  They wanted British laws judged by British courts.  What they didn’t tell us was that they only wanted that if it agreed with them.
An independent judiciary and the separation of courts and political partisanship have long been held to be the foundation stones of healthy democratic societies.  So long as courts remain above the fray then political acts can be called to account and subjected to an impartial judgement.  Politicians can too, if the need arises.  We have a strong legal system because it protects us.  We have it because we, the people, deserve that protection against the unbounded ambitions of our political leaders.
Parliament offers up a different level of protection, but one that is no less crucial to the well-being a state’s citizens.  With proper parliamentary scrutiny, a government – the executive – cannot get away with arbitrary rule or unchecked authority, the key components of dictatorships throughout history.  It is always a dangerous sign when the leaders of an executive in a democratic society start to rail against the very institutions designed to stop their descent into arbitrary and dictatorial rule.
It was the desire to ensure that such institutions of checking distant authority were local and robust that infused so much of the Brexit leaders’ campaigning.  One of their primary complaints against the European Union was the lack of accountability of its too distant institutions.
The unbounded Brexit hysteria about the High Court’s ruling on Article 50 has revealed them to be little more than the populist demagogues we always suspected, rather than the guardians of a uniquely British system of calling power to account.  It is a bizarre reversal.  Their Brexit view takes on a different perspective.  Perhaps their railing against the EU was not about constitutional principle all along, but simply about the fact that they detested its political views.
And then there is the marvellous, if wholly misleading, invocation of the “people’s will” in the Brexit criticism of the High Court.  The “people” do not act as one, and never have.  In the Brexit referendum the “people” were pretty broadly split.  Just under 17.5 million people did indeed vote to leave, but just over 16 million voted to stay.  That is a difference of less than 4%.  By no reckoning was the vote a sweeping indication of the will of all of the British people.  Nigel Farage, the defining  figure of the campaign, certainly never used to consider such a small majority to be decisive.  He claimed – before the referendum – that if only a 4% majority voted to stay in the EU, then the referendum would have to be re-run.  So the “people” cannot be invoked on the Brexiters’ side without substantial qualification.
Theresa May’s initial virtue as a new Prime Minister – one who has not of course received any mandate as leader from the British electorate – was that she understood the need to act upon the result of a referendum in which she had played only a very lukewarm role.  She was right in that.  But where she has begun to sully her reputation is in her failure to recognise that the democratic authority of the referendum was severely limited.  Limited by its tiny majority, and limited by the fact that it provided only a simple decision – to leave the EU – but left unanswered any questions about how, or even why.  Certainly the referendum provided no guidance on the mechanism of leaving.  This is where parliament correctly reasserts itself.
The UK is still a parliamentary democracy.  The occasional use of referendums doesn’t alter that.  At best, the referendums provide a direction of travel.  They do not suddenly cede a mythical popular authority to a government to do whatever it will, without recourse to parliament.  The dictators of the twentieth century favoured plebiscites as a form of underpinning for their own regimes.  Theresa May and her government are nowhere near that line, but they are favouring a similar methodology for their own purposes.
The response of the Brexit press to the High Court ruling has been rabble-rousing, inaccurate and unappealing.  It has placed the ruling as an attempt to stop Brexit rather than an attempt to restore the sort of parliamentary sovereignty that Brexiters once advocated.  It is one thing for a fickle, commercial and foreign-owned press to be irresponsible and wilfully ignorant.  It is quite another when the government in power seems to go along with it.  The Justice Secretary has revealed herself to be nothing more than a craven political hack, unworthy of the ancient duty and authority of the Lord Chancellor position which is still part of her title.  Mrs. May should be careful not to replicate the tawdry image that her Justice Secretary has acquired.  After all, she has no strong mandate herself.