Europe's strong, convincing, systemic recovery ... the meme of the European leaders from Ireland all the way across to the Baltics, and save for Greece, from the Mediterranean to Arctic Ocean comes to test with reality in the latest Pictet Quarterly and if the only chart were all you needed to see why the Continent is drowning in populist politics, here it is: 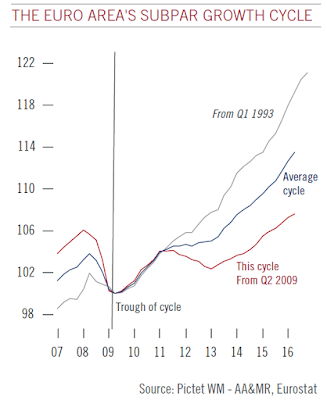 As Christophe Donay and Frederik Ducrozet explain (emphasis is mine):

"Since 2008, the world’s main central banks have used a vast array of transmission channels: currency weakening to reboot exports; reflation of asset prices to boost confidence; a clean-up of banks’ balance sheets to boost the credit cycle. But, ultimately, all these measures have failed as economic growth remains subdued. Indeed, the belief that countries have become trapped in suboptimal growth and that developed economies, especially in Europe, look set to complete a
‘lost decade’ of subpar growth (see graph) since the financial crisis forms the third strand of criticism of monetary policy."

Whatever one can say about the monetary policy, one thing is patently obvious: since the introduction of the Euro, the disaster that is European economy became ever more disastrous.