Nicholas Eberstadt recently raised an interesting question regarding the role of Medicaid, the United States' welfare program that provides free health insurance for Americans with low incomes, when he commented on how it may very well have directly contributed to the nation's rising problem with opioid addiction.

The opioid epidemic of pain pills and heroin that has been ravaging and shortening lives from coast to coast is a new plague for our new century. The terrifying novelty of this particular drug epidemic, of course, is that it has gone (so to speak) "mainstream" this time, effecting breakout from disadvantaged minority communities to Main Street White America. By 2013, according to a 2015 report by the Drug Enforcement Administration, more Americans died from drug overdoses (largely but not wholly opioid abuse) than from either traffic fatalities or guns. The dimensions of the opioid epidemic in the real America are still not fully appreciated within the bubble, where drug use tends to be more carefully limited and recreational. In Dreamland, his harrowing and magisterial account of modern America’s opioid explosion, the journalist Sam Quinones notes in passing that "in one three-month period" just a few years ago, according to the Ohio Department of Health, "fully 11 percent of all Ohioans were prescribed opiates." And of course many Americans self-medicate with licit or illicit painkillers without doctors' orders....

How did so many millions of un-working men, whose incomes are limited, manage en masse to afford a constant supply of pain medication? Oxycontin is not cheap. As Dreamland carefully explains, one main mechanism today has been the welfare state: more specifically, Medicaid, Uncle Sam's means-tested health-benefits program. Here is how it works (we are with Quinones in Portsmouth, Ohio):

[The Medicaid card] pays for medicine—whatever pills a doctor deems that the insured patient needs. Among those who receive Medicaid cards are people on state welfare or on a federal disability program known as SSI.... If you could get a prescription from a willing doctor—and Portsmouth had plenty of them—Medicaid health-insurance cards paid for that prescription every month. For a three-dollar Medicaid co-pay, therefore, addicts got pills priced at thousands of dollars, with the difference paid for by U.S. and state taxpayers. A user could turn around and sell those pills, obtained for that three-dollar co-pay, for as much as ten thousand dollars on the street.

In 21st-century America, "dependence on government" has thus come to take on an entirely new meaning.

It occurred to us that we have the ability to determine whether Medicaid is contributing to the nation's growing opioid epidemic by taking advantage of a natural experiment made possible by the Affordable Care Act. More popularly known as "Obamacare", the primary means by which the ACA has expanded health insurance coverage in the U.S. has been through the expansion of eligibility in the U.S.' Medicaid welfare program, where the threshold for eligibility was raised from 100% of the federal poverty limit to 138% of the federal poverty limit in states that agreed to expand their Medicaid programs.

That state-by-state division then provides for the basis of a natural experiment, where we can get a sense of how well correlated the expansion of enrollment in Medicaid is with the incidence of deaths from drug overdoses, which have been increasing as part of the U.S.' growing problem with opioid drug addiction.

The image below shows what we found for the age-adjusted death rate per 100,000 Americans from drug overdoses for the years from 2010 through 2015, which covers the years in which the individual U.S. states that chose to expand their Medicaid enrollment did so. We've ranked the states in order from the greatest increase in the rate of deaths from drug overdoses between 2013 and 2015, which for all but six states, marks the difference between "before" and "after" for the expansion of their Medicaid programs. 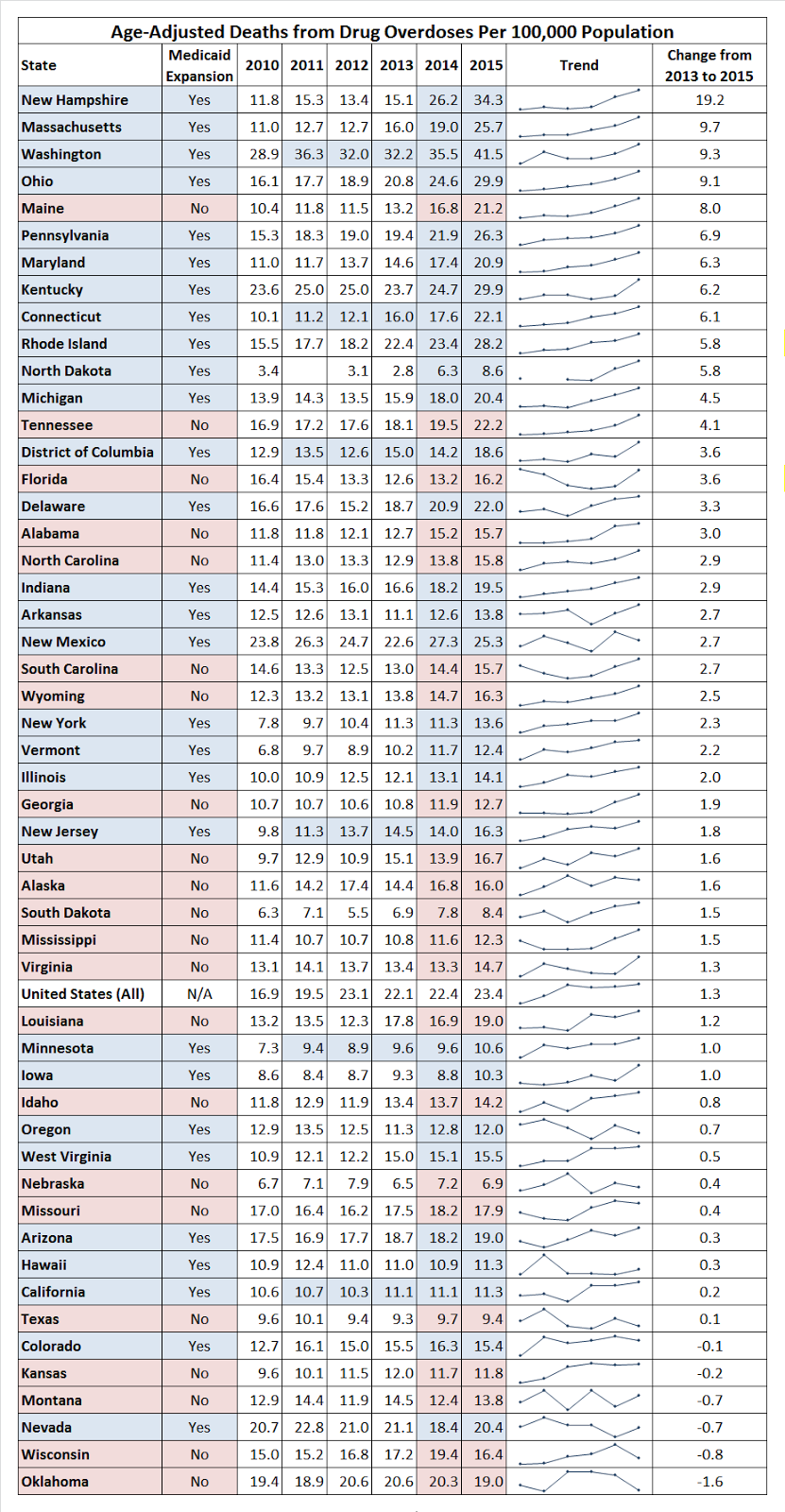 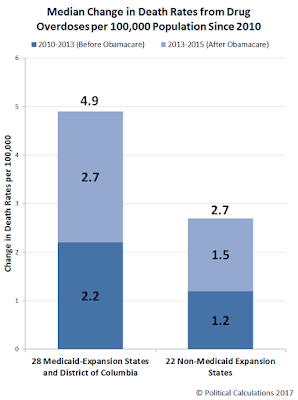 Those figures are significant because 2010 marked the year in which the use of opioid street drugs like heroin and synthetic versions like fentanyl and tramodol began to take off, along with deaths from drug overdoses as they were increasingly substituted for prescription medications like OxyContin by addicts, which came about because of the introduction of abuse-resistant forms of the opioid-based medication.

As we've shown, that acceleration took place predominantly in the states that had expanded their Medicaid programs, where in accordance with the policies and practices advocated from the top down by a federal government bureaucracy that saw prescribing painkillers as a less costly option when compared with more expensive medical treatments, many newly covered patients were prescribed the painkilling medications to which they would become addicted, at nearly no out-of-pocket costs to themselves.

Until the prescriptions ran out. That's when the newly addicted turned to the opioid substitutes available in the U.S.' black market, driving up the nation's opioid addiction rates to new highs in portions of the population that had not previously been at such elevated risk.

If access to health care through Medicaid really improved health care outcomes, these are outcomes that we would not observe. That the expanded access to Medicaid would appear to be making that problem worse indicates that the Medicaid welfare program is in dire need of major reform.