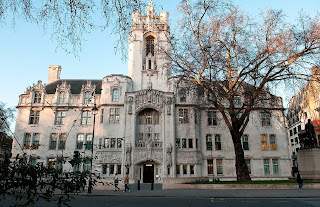 Tempers have calmed down a bit in the more extreme fringes of the media and the decision of the Supreme Court justices - by an 8-3 majority - to reiterate the lower court ruling that parliament is sovereign when it comes to legislation, may be greeted by rather less fuss than met the original lower court conclusion.

In part, this may be because the fanatical Brexiters have now realised that their precious project - whatever form it finally takes - isn't going to be blocked by parliament.  The rage of the Sun and Daily Mail tribe and all their acolytes was never about constitutional propriety and always about the invidious cheek of anyone daring to challenge Brexit.  But parliament will accede to May's request to initiate Article 50.  It was always going to.

I forget what the Spectator magazine stance was when the first ruling was made, but editor Fraser Nelson has this time produced a careful and effective acknowledgement of why the Supreme Court was right.  It's well worth a read since it encapsulates the issue of both constitutional power in Britain and also links it coherently with one of the Brexit demands - that British institutions reign supreme, without foreign oversight.

It's also refreshing to read because the Spectator have had a tendency in recent weeks to publish more irrational right-wing rants than they used to.  They've always made room for Rod Liddle and Brendan O'Neill, who are virtual caricatures of the angry loon shaking his fist at everything in the world, but they seem to be adding to their number in some of their features.  I read an egregious piece a couple of weeks ago railing against the unadulterated teaching of liberal nostrums in our schools.  Utter fantasy but why let facts ruin a good rant?  Anyway, Nelson has moved the balance back a bit this week which is good news as I've always had a soft spot for venerable weekly.