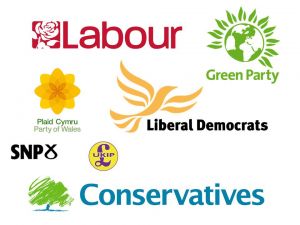 Political parties are the heart and soul of our democratic system.  They are the crucial interface between voters and professionals, providing the space for hard-pressed volunteers who may not wish to become professionally involved in politics to nonetheless become active agents in the body politic.  They have also been facing significant decline over many years.  While there has been a slight recovery in the UK since 2013 – especially for Labour and the SNP – the overall figures are depressing.
The website Democratic Audit estimates that only 1% of the UK population is a member of a political party.  In the 1950s, parties famously calculated their members in the millions.  The Conservatives were dominant with their 3 million or so members, but Labour garnered some 1 million too.
Labour is now the dominant party with half of their 1950s figure – 515,000 members according to a House of Commons Library briefing.  The Conservative figure is more difficult to get hold of – many of the constituency parties  don’t file complete returns, and the party still runs quite a federalist structure with significant opposition to centralising party membership.  Nevertheless, figures published in 2013 suggest the Conservatives have a mere 149,800 members.  The Lib Dems have some 79,000 members.
Party membership decline is evident across Europe, although it remains most marked in Britain.  The Democratic Party (PD) in Italy has some 500,000 members, while the two behemoths of German politics – the CDU and SPD – have around 477,000 members each.  To that figure the CDU could add those of its ally, the separate, Bavarian only CSU party which has over 146,000 members.
Why does this matter?  Because the health of the parties is a major indicator of the health of a representative democracy.  Parties provide a key focus of engagement for citizens.  It allows them to meet with their elected representatives, have a role in choosing them, gives them a chance to offer themselves for election at local and national levels and offers a platform to change party policies.
This is about much more than simply attaching oneself to a single cause, as offered by the pressure groups.  This is about a full and broad involvement in the democratic process.  This is about committing to action and nailing political colours to a mast – any mast.
Parties are the foundation stones of any representative democratic system, and they depend utterly on members for both financial resources and the all important human resources.  It should come as little surprise that a growing national disengagement with politics has been accompanied by such a decline in party memberships.   Interestingly, as the memberships get smaller, the relative importance of the remaining members gets bigger.
Labour saw a spike in numbers as a result of their leadership troubles, with the Momentum movement organising effectively to get sympathisers to join and confirm Jeremy Corbyn’s leadership of the party.  Party memberships have always tended to be more radical than their outward-facing elected representatives, but as those memberships decline so the impact of a hard-core radical few makes even greater waves across the national party.  For Labour it has been the election of its most left-wing – and polling suggests unelectable – leader ever.  For the Conservatives, it gave euro-scepticism a crucial place in the party’s bloodstream and led to the Brexit referendum.
Party memberships can absolutely define politics on the wider stage.  They can also make life difficult for specific representatives.  MPs may represent up to 100,000 people in their constituencies, but their attention can often be dragged towards the few who are members and office holders in their own party.   Labour’s MP for Brighton and Hove, Peter Kyle, faced serious de-stabilisation in September when one of his local members, briefly elected as Vice-Chairman, started agitating against him for not supporting Jeremy Corbyn.  Today, the deputy chairman of Loughborough Conservative Party went on the BBC’s “Sunday politics” to denounce his own MP, Nicky Morgan, for criticising Theresa May.  The two party office holders speak only for themselves, where Morgan and Kyle represent thousands of voters of differing hues, but that hasn’t stopped a brief but strong media focus on those party critics.
There are signs of a resurgence in the importance of party membership.  Labour’s spike – increasing its membership from 270,000 to 515,000 in less than a year thanks to the leadership election – is seen in other parties too.  The Liberal Democrats saw their membership rise significantly after their crushing General Election defeat, as liberal-minded voters sought to engage once again in a liberal fight-back, seen most recently in the success of Sarah Olney – a member of just one year’s standing – being elected as MP to the former Conservative held seat of Richmond Park.  The SNP saw a spike in membership after losing the independence referendum.  It is interestingly Conservative party membership which appears to have been least affected, even though its political bias has probably had the single most important impact on British politics in over 40 years.
As the importance of party members re-asserts itself, so elected representatives become more responsive.  The Observer’s Andrew Rawnsley notes that Labour MPs, since the re-election of their bete noir Jeremy Corbyn as leader, have been quietly re-working their constituency parties to ensure the election of supportive office-holders.   The internet supporters of Momentum have been less inclined to go the extra mile in attending local party meetings, and as Rawnsley notes, it is at these unglamorous occasions where real power can be wielded.
The larger the membership of a party becomes, the more it can reflect the different shades of opinion in the society from which it grows, and the more effective an interface it is between ordinary voters and the professional politicians.  A larger party base, too, increases the range of talents available to parties in selecting their elected representatives, and ultimately their leaders.
The health of a democracy, after all, plays out in the health of its parties.