Recently, I wrote about the latest Fitch Ratings data showing a dramatic decline in the number of AAA-rated sovereigns over 2016 (see: http://trueeconomics.blogspot.com/2017/02/10217-sovereign-debt-bubble-methane.html). Now, take a look at the Fitch's latest analysis of the trends in A and better rated sovereigns: 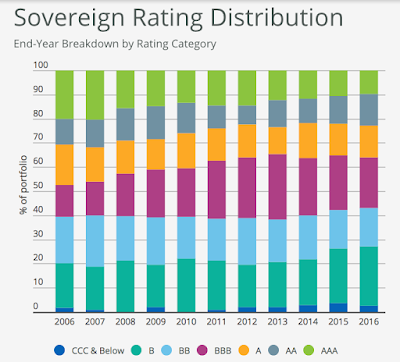 Per Fitch: "The proportion of 'A-' and higher ratings in Fitch's global portfolio of sovereigns, corporates and banks remains well below the pre financial-crisis level and could fall further over the next couple of years as the balance of ratings outlooks has deteriorated."