Quite dramatic trends in terms of rising economic uncertainty over the last 21 years: 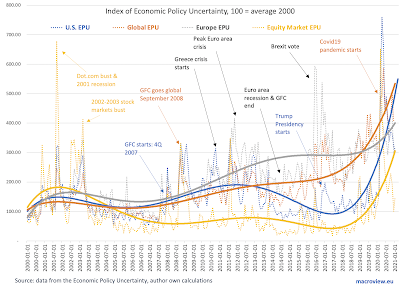 And, not surprisingly, the rise of uncertainty in Europe, the U.S., and globally pre-dates the Covid19 pandemic. In fact, Europe has been experiencing dramatically elevated uncertainty levels since the start of the Euro area crisis, while the U.S. saw a virtually exponential rise in uncertainty from 2017 on. Global measures of uncertainty have been running high through 2016 and rose dramatically thereafter.

While amelioration in the Covid19 pandemic dynamics is likely to lower the levels and the volatility of the uncertainty in global economic systems, it is highly unlikely to return us to the pre-Global Financial Crisis state of affairs.

As noted in the previous post, covering the topic of continued mis-pricing by equity markets of policy uncertainties, much of the decline in the Global Economic Policy Uncertainty Index has been accounted for by a drop in European countries’ EPUIs. Here are some details:
In May 2017, EPU indices for France, Germany, Spain and the UK have dropped significantly, primarily on the news relating to French elections and the moderation in Brexit discussions (displaced, temporarily, by the domestic election). Further moderation was probably due to elevated level of news traffic relating to President Trump’s NATO visit. Italy’s index rose marginally.
Overall, European Index was down at 161.6 at the end of May, showing a significant drop from April 252.9 reading and down on cycle high of 393.0 recorded in November 2016. The index is now well below longer-term cycle trend line (chart below). 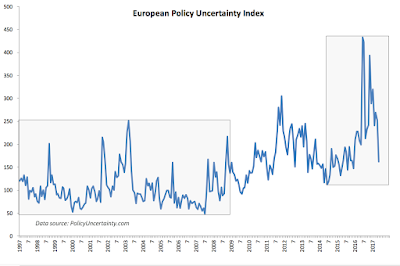 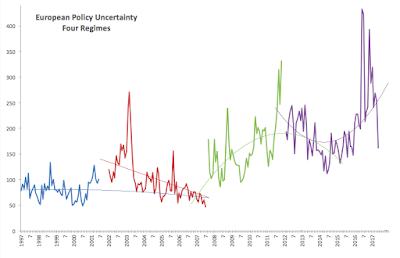 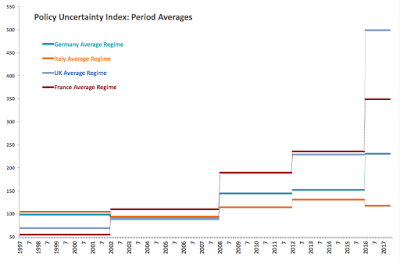 Overall, levels of European policy uncertainty remain well-above pre-2009 averages, even following the latest index moderation.
There has been some moderation in the overall levels of Economic Policy Uncertainty, globally, over the course of May. The decline was primarily driven by European Uncertainty index falling toward longer-term average (see later post) and brings overall Global EPU Index in line with longer term trend (upward sloping): 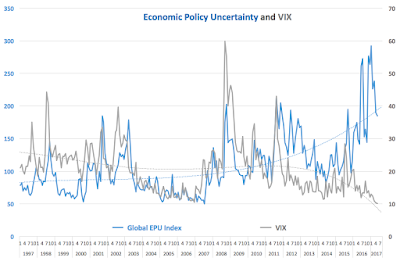 This meant that short-term correlation between VIX and Global EPUI remained in positive territory for the second month in a row, breaking negative correlations trend established from October 2015 on. 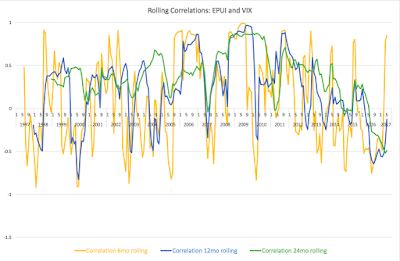 The trends in underlying volatility of both VIS and Global EPUI remained largely the same: 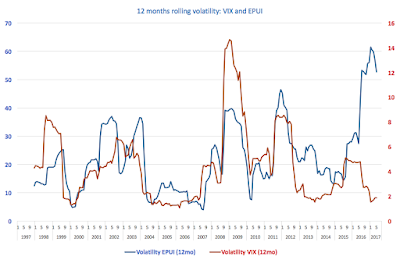 The key to the above data is that equity markets risk perceptions remain divorced from political risks and uncertainties reflected in the Global EPUI. This is even more apparent when we consider actual equity indices as done below: 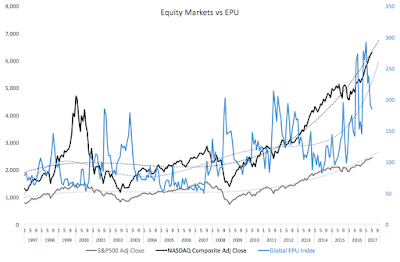 Both, on longer-run trend comparative and on shorter term level analysis bases, both S&P 500 and NASDAQ Composite react in the exactly opposite direction to Global Economic Policy Uncertainty measure: rising uncertainty in the longer run is correlated with rising equities valuations.

European Policy Uncertainty Index, an indicator of economic policy risks perception based on media references, has posted a significant moderation in the risk environment in the first quarter of 2017, falling from the 4Q 2016 average of 307.75 to 1Q 2017 average of 265.42, with the decline driven primarily by moderating uncertainty in the UK and Italy, against rising uncertainty in France and Spain. Germany's economic policy risks remained largely in line with 4Q 2016 readings. Despite the moderation, overall European policy uncertainty index in 1Q 2017 was still ahead of the levels recorded in 1Q 2016 (221.76). 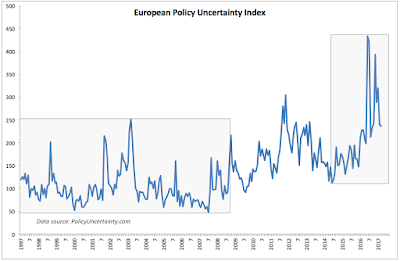 Despite some encouraging changes and some moderation, economic policy uncertainty remains highly elevated across the European economy as shown in the chart and highlighted in the chart below: 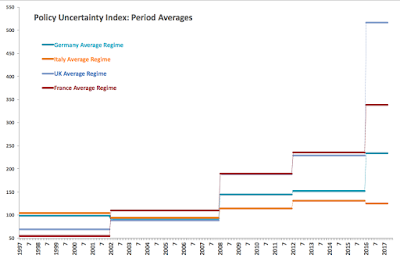 Of the Big 4 European economies, only Italy shows more recent trends consistent with decline in uncertainty relative to 2012-2015 period and this moderation is rather fragile. In every other big European economy, economic uncertainty is higher during 2016-present period than in any other period on record.
Much has been said recently about the collapse of ‘risk gauges’ in the financial markets, especially on foot of the historically low readings for the markets’ ‘fear index’, VIX. In terms of medium-term averages, current VIX readings are closely matching the readings for the period of ‘peak’ ‘Great Moderation’ of 1Q 2005 - 4Q 2006, while on-trend, VIX is currently running below 2005-2006 troughs. In other words, risk has effectively disappeared from the investors’ (or rather traders and active managers) radars (see chart below).

At the same time, traditional perceptions of risk in the financial markets have been replaced by a sky-rocketing uncertainty surrounding the real economy, and especially, economic policies. The Economic Policy Uncertainty Indices have been hitting all-time highs globally (see chart below), and across a range of key economies (see this for my recent analysis for Europe: http://trueeconomics.blogspot.com/2017/01/15117-2016-was-year-of-records-breaking.html, this for Russia and the U.S.: http://trueeconomics.blogspot.com/2017/01/17117-russian-economic-policy.html). In current data, Economic Policy Uncertainty Index (EPUI) has been showing extreme volatility coupled with extreme valuations. Index values are rising above historical norms both in terms of medium-term averages and in terms of longer term trends. 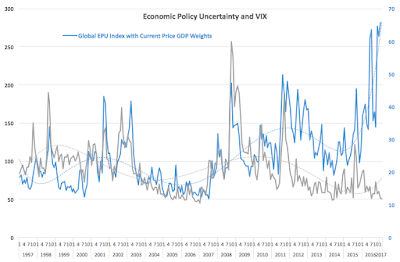 Another interesting feature is the direct relationship between the EPUI and VIX indices. Based on rolling correlations analysis (see chart below), the traditionally positive correlation between the two indices has broken down around the start of 2Q 2016 and since then all three measures of correlation - the 6-months, the 12-months and the 24-months rolling correlations - have trended to the downside, turning negative with the start of 2H 2016. Since November 2016, we have a four months period when all three correlations are in the negative territory, the first time this happened since June 2007 and only the second time this happened in history of both series (since January 1997). Worse, the previous episode of all three correlations being negative lasted only two months (June and July 2007), while the current episode is already 4 months long. 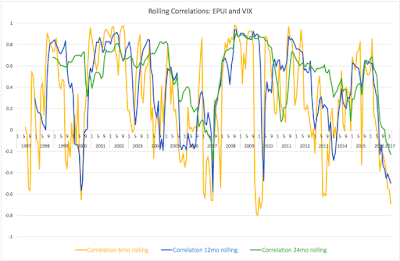 Final point worth making is that while volatility of VIX has collapsed both on trend and in level terms since the start of H1 2016 (see chart below), volatility in EPUI has shot up to historical highs. 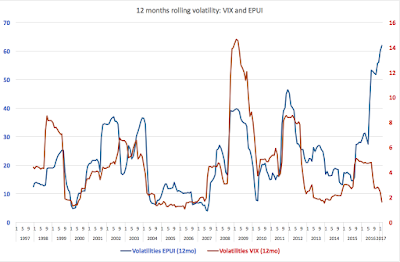 Taken together, the three empirical observations identified above suggest that the current markets and economies are no longer consistent with increased traditional risk environment (environment of measurable and manageable risks), but instead represent VUCA (volatile, uncertain, complex and ambiguous) environment. The VUCA environment, by its nature, is characterised by low predictability of risks, with uncertainty and ambiguity driving down efficacy of traditional models for risk assessments and making less valid traditional tools for risk management. Things are getting increasingly more complex and uncertain, unpredictable and unmanageable.