Based on data reported at the end of January 2017 by the Eurostat, since 2003, through 3Q 2016, or roughly across the span of 13 years,
Compared to pre-Global Financial Crisis peaks (based on the 4 quarters average around the peak) at the end of 3Q 2016:
As chart below shows, in simple terms, the last nine years saw: 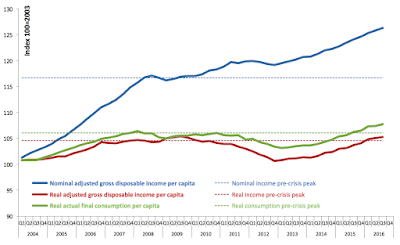 Coupled with a simple fact that the EA19 includes countries with consumption and incomes catching up toward the EA12 averages, while gross disposable income does not net out fiscal losses sustained due to post-crisis tax and spending rebalancing across the EA19, the picture is quite dire: there is, effectively, no meaningful growth in incomes in the euro area for some 9-10 years running. Worse, when we adjust for ageing demographics, the marginal increase in the real consumption of the last 9-10 years is also far from being comforting.
While the Eurostat does not report received real wages dynamics, using income deflator we can estimate changes in the real wages. Chart below shows the results: 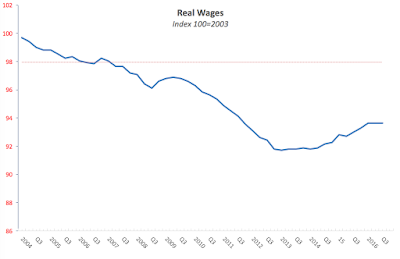 In real (inflation-adjusted) terms, take home (received) wages have fallen in the EA19 group of countries in 2003-2016, with 3Q 2016 real wages index reading at around 93.6, down 6.4 percentage points on the end of 2003. A caveat applying to this is that I am using index values to map out nominal-to-real revaluation. Still, minor errors and rounding issues aside, the chart above clearly shows the lack of real wages income uplift in the EA19 since the early 2000s.