The latest joint economic forecast for German economy is out and, in line with what Eurocoin has been signalling recently (see post here), the forecast upgrades outlook for Euro area's largest economy.

Here's the release, with some commentary added: Germany's "aggregate production capacities are now likely to have slightly exceeded their normal utilisation levels. However, cyclical dynamics remain low compared to earlier periods of recoveries, as consumption expenditures, which do not exhibit strong fluctuations, have been the main driving force so far. In addition, net migration increases potential output, counteracting a stronger capacity tightening." 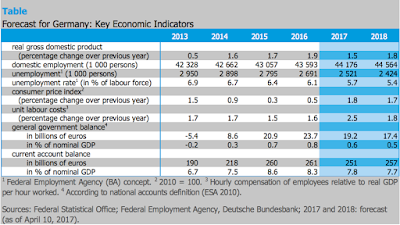 Slight re-acceleration in both budgetary surplus and current account surplus over 2017-2018 will provide a very small amount of room for growth in imports and capital investment out of Germany to the rest of the euro area.