There has been quite a puzzling development in recent years in the monetary policy universe. A decade plus of ultra low interest rates has been associated with rising, not falling, risk premium in investment markets. In other words, a dramatically lower cost of new and carried debt induced by lower interest rates - a driver for lower risk, is being offset by something else. What?

To start with, some theory - especially for my students in the Investment and Financial Systems courses. Per author, "the value of a stock is the present value of its expected future dividends... Hence, the changes in stock prices must be explained by

The discount rate, or (approximately) expected rate of return, can be thought as a sum of a risk-free rate and a risk premium. Theoretically, monetary policy should have an effect on stock prices through the risk-free rates. In addition, monetary policy should affect dividend expectations, for example, through the output or debt interest payments of firms. The effect on the risk premium (not to mention the term structure of risk premia), however, is less clear."

Looking at Eurostoxx50 index components, Laine shows "...that the average expected premium has increased considerably since the global financial crisis. This change is explained by the change in long-horizon expected premia. ... monetary policy easing has had a positive impact on the expected average premium."

This is not exactly new, as Bernanke and Kuttner (2005) observed that "expansionary monetary policy generates an immediate rise in equity prices followed by a period of lower-than-normal excess returns. ...However, Bernanke and Kuttner (2005) do not study the effect on the long-run excess returns. My results show that effect on long-horizon expected premia has a different sign. This effect on long-horizon premia seems to more than offset the effect on short-horizon premia."

Here is (annotated by me) a chart showing evolution of implied and actual risk premia: 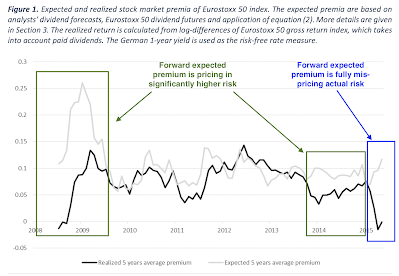 So, onto the empirical results by Laine: 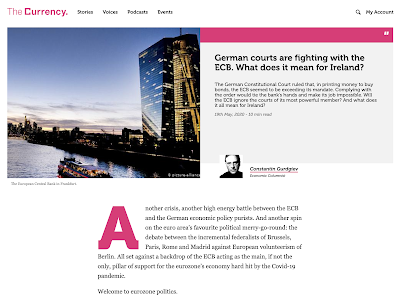 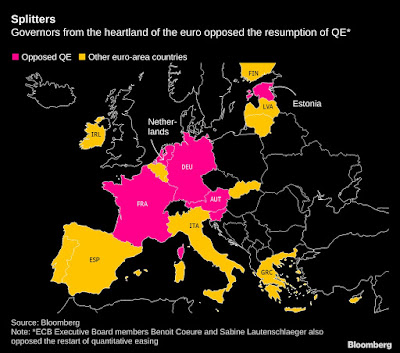 The ECB is more divided than ever on the 'new' direction of QE policies announced earlier this month, as its severely restricted 'political mandate' comes hard against the reality of VUCA environment the euro area is facing, with: 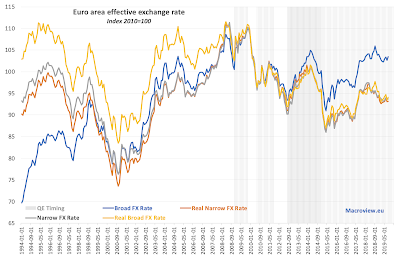 Meanwhile, for the measures of monetary policy effectiveness (lack thereof) see upcoming analysis of the forward forecasts for euro area growth on this blog in relation to Eurocoin data.
Dear investors, welcome to the Trump Trade Wars, where 'winning bigly' is really about 'losing globally': 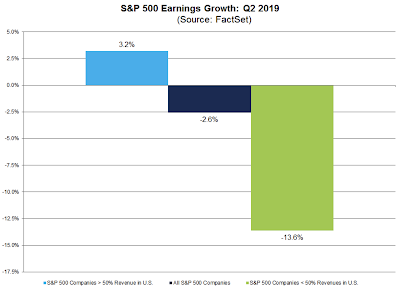 Three sectors are driving S&P500 earnings and revenues divergence for globally-trading companies:
What is harder to price in, yet is probably material to these trends, is the adverse reputational / demand effects of the Trump Administration policies on the ability of American companies to market their goods and services abroad. The Fed rate cut today is a bit of plaster on the gaping wound inflicted onto U.S. internationally exporting companies by the Trump Trade Wars. If the likes of ECB, BoJ and PBOC counter this move with their own easing of monetary conditions, the trend toward continued concentration of the U.S. corporate earnings and revenues in the U.S. domestic markets will persist.
With U.S. Fed entering the stage where the markets expectations for a pause in monetary tightening is running against the Fed statements on the matter, and the ambiguity of the Fed's forward guidance runs against the contradictory claims from the individual Fed policymakers, the real signals as to the Fed's actual decisions factors can be found in the historical data.

Here is the history of the monetary easing by the Fed, the ECB, the Bank of England and the BOJ since the start of the Global Financial Crisis in two charts:

Chart 1: looking at the timeline of various QE programs against the Fed's balancesheet and the St. Louis Fed Financial Stress Index: 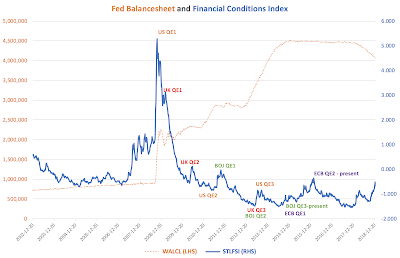 There is a strong correlation between adverse changes in the financial stress index and the subsequent launches of new QE programs, globally.

Chart 2: looking at the timeline for QE programs and the evolution of S&P 500 index: 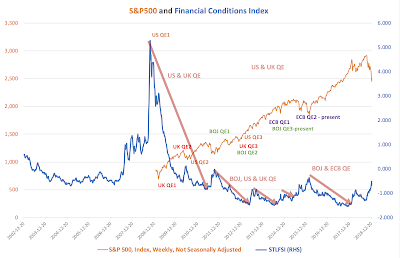 Which brings us to the latest episode of increases in the financial stress, since the end of 3Q 2018 and the questions as to whether the Fed is nearing the point of inflection on its Quantitative Tightening  (QT) policy.