Given current debates surrounding the impact of migrant labour on native (and previously arriving migrants) wages, jobs security, career prospects and other major motivations behind a wide range of migration regimes reforms proposed across a number of countries, including the U.S., it is worth revisiting research done by Giovanni Peri of University of California, Davis, USA, and IZA, Germany back in 2014.

Titled “Do immigrant workers depress the wages of native workers?” and published by IZA World of Labor 2014: 42 in May 2014, https://wol.iza.org/articles/do-immigrant-workers-depress-the-wages-of-native-workers/long, the paper reviews 27 original studies published between 1982 and 2013, covering the topic of immigration impact on wages of the natives. Chart below summarises: 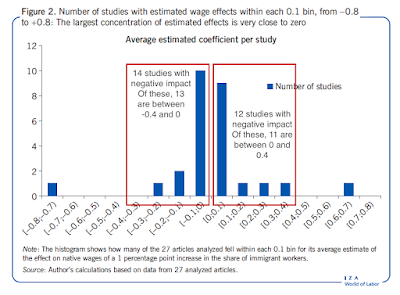 In the above, the “values report the effects of a 1 percentage point increase in the share of immigrants in a labor market (whether a city, state, country, or a skill group within one of these areas) on the average wage of native workers in the same market.

For example, an estimated effect of 0.1 means that a 1 percentage point increase in immigrants in a labor market raises the average wage paid to native workers in that labor market by 0.1 percentage point. These studies used a variety of reduced-form estimation and structural estimation methods; all the estimates were converted into the elasticity described here.”

Here’s the summary of Peri’s findings and conclusions: