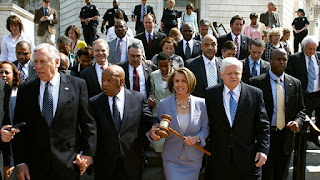 Parties
Democrats in the House
While Republicans have effectively divided into two warring parties over the Obamacare repeal, Democrats have retained a strong congressional unity, says the Washington Post’s Daily 202.
Key points:
1-      Democrats have voted with consistent unanimity in rejecting repeal proposals, even those up for re-election in Trump states and districts
2-      The House Democratic caucus has changed since Obamacare’s passage in 2010.  “Blue Dogs” have been wiped out and the party’s base has moved left; of 34 Democrats who opposed Obamacare in 2010, only 3 are still sitting in 2017 and they are all opposed to GOP repeal attempts.
3-      The Democrats are reacting to the so-called Resistance movement’s pressure from outside the House; similar to Republicans and the tea party at the beginning of Obama’s presidency
4-      House Democrat Leader Nancy Pelosi acknowledges it is easier to mobilise votes against something than for something and imposes strict discipline on her caucus
5-      In a Washington Post interview, also promoted in the Daily 202, Pelosi noted the importance of keeping the Democrat tent a wide one, incorporating pro-lifers as well as abortion rights activists.
Democrat Problems
“Commentary’s” Noah Rothman says the Democrats have been learning the wrong lessons from their 2016 defeats:
1-      Blaming Hillary Clinton and other external party factors for their defeat, the Democrats have concluded that re-energising their base is the way forward
2-      The problem is that the Democrat base was already energised in 2016 – but for Donald Trump
3-      The so-called “Obama Coalition” seemed to show that Democrats no longer needed their white working-class voters; 2016 showed that Clinton could not keep the “Obama Coalition” in place – perhaps no other Democrat can
4-      Democrats are thus allowing a new and radicalised base to drive them, whilst ignoring the original white working-class base which used to win them elections
Hillary Clinton on defeat
Hillary Clinton has been speaking about her reaction to her defeatin an interview with CNN’s Christine Amanpour.  Whilst accepting “personal responsibility” for the defeat, she also cited other factors as being decisive – notably James Comey’s re-opening her email case, the Wikileaks hack of John Podesta’s emails, and misogyny in politics.   Clinton’s campaign has also been the subject of a “tell-all” book – “Shattered” – which is hostile to the former Secretary of State’s failed candidacy against Donald Trump, suggesting she was insular, secretive and isolated from disenchanted Democrat voters.
Race and Parties
Trump and the resurgence of race issues
President Donald Trump has reiterated his admiration for President Andrew Jackson (the first real “Democrat” president), claiming that had Jackson been president later the Civil War would not have happened, in an interview with the Washington Examiner.
Salon writer Chauncey Devega sees this as further evidence of Trump and the Republicans’ neo-Confederate racist leanings.  His key take-aways:
1-      Trump’s inner circle hold white ethno-nationalist, supremacist beliefs
2-      They came to power in part by promoting a false idea of white victimhood
3-      Andrew Jackson, who carried out a campaign of ethnic cleansing in the American west against Native Americans, is an appropriate symbol for this movement
4-      Neo-confederates promote a historical fiction that the Civil War was not about slavery but states’ rights
5-      It is no surprise that the KKK endorsed Donald Trump
6-      Lyndon Johnson’s Civil Rights Act gave birth to the modern, white supremacist Republican Party.  It “transformed the party of Abraham Lincoln into the party of Jefferson Davis”.
7-      The Trump Administration’s treatment of undocumented Latino immigrants is redolent of the hunting of fugitive slaves before the civil war.
8-      Trump’s Attorney General Jeff Sessions continues to be dogged by allegations of a racist past. 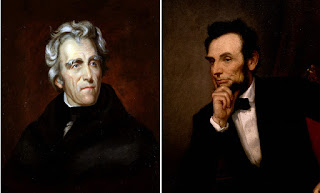