Those of you who follow this blog know that I am a severe/extreme contrarian when it comes to median investor perceptions of the severity of leverage risks. That is to say, mildly, that I do not like extremely high levels of debt exposures at the macroeconomic level (aggregate real economic debt, which includes non-financial corporations debt, household debt and government debt), at the financial system levels (banking debt), at the microeconomic (firm) level, and at the level of individual investors own exposure to leverage.

With this in mind, let me bring to you the latest fact about debt, the fact that rings multiple bells for me. According to the data from the U.S. Federal Reserve, household debt in the U.S. has, as of the end of 1Q 2017, exceeded pre-2008 peak levels and hit an all-time high by the end of March.

Chart below illustrates the trends for total household debt: 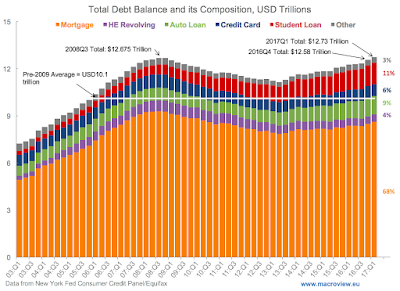 Another key trend in household debt relates to debt defaults and risks. Here too 1Q 2017 data is far from encouraging. Pre-Global Financial Crisis average delinquencies (120 days or more overdue loans and Severely Derogatory delinquencies) average 2.07 percent of total debt outstanding. In 1Q 2017, some 29 quarters of deleveraging later, the comparable percentage is 3.0 percent. This is bad. Worse, take together, all household debt that was in delinquency in 1Q 2017 was 4.8 percent, which is still above 4.56 percent average for pre-2008 period. 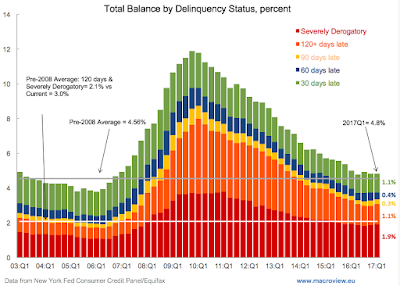 While overall delinquencies are not quite at problematic levels, yet, we must keep in mind the underlying conditions in which these delinquencies are taking place. Prior to the onset of the Global Financial Crisis, interest rates environment was much less benign than it is today toward higher levels of debt exposures: debt origination costs (direct cash costs) and debt servicing costs (income charge from debt) were both higher back in the days of the pre-2008 boom. Today, both of these costs are lower. Which should have led to lower delinquencies. The fact that delinquencies still run above pre-2008 levels implies that we are witnessing poorer underlying household fundamentals against which the debt is written.
Sadly, you won;t read this view of the current debt and debt burden issues from the mainstream media and analysts.