A very interesting chart from The Economist from last week providing evidence on rapid evolution of cryptocurrencies: 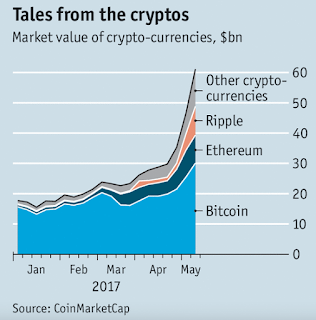 What is also notable is that Ripple is now on par with Ethereum and their combined valuation is now a challenger to Bitcoin.

Uncharacteristically for The Economist,  the publication that never sees a bubble until it pops is calling a bubble in the cryptos. Perhaps due to a freshly acquired consciousness of empiricism or due to the publication's innate distaste for anything not-state-centric. Still, given the exponential growth so far this year, cryptos are overdue a major correction. When and how will it be triggered is anyone's guess.