Latest data from FactSet on S&P500 core metrics is an interesting read. Here are a couple of charts that caught my attention: 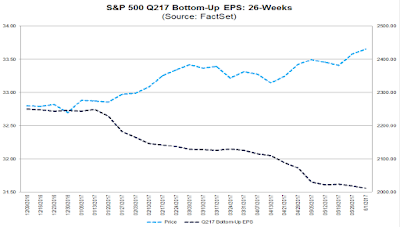 Look first at the last 6 months worth of EPS data through estimated 2Q 2017 (based on 99% of companies reporting). The trend continues: EPS is declining, while prices are rising. On a longer time scale, EPS have been virtually flat in 2014-2016, but are forecast to rise nicely in 2017 and 2018. Whatever the forecast might be for 2018, 2017 increase would do little to generate a meaningful reversion in EPS to price trend 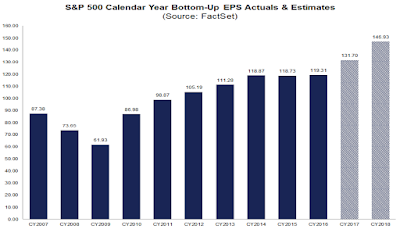 However, the good news is, expectations on rising EPS are driven by rising sales for 2017, and to a lesser extent in 2018. This would be (if materialised) an improvement on the 2014-2016 core drivers, including shares repurchases (chart below). 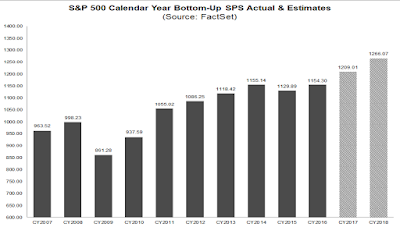 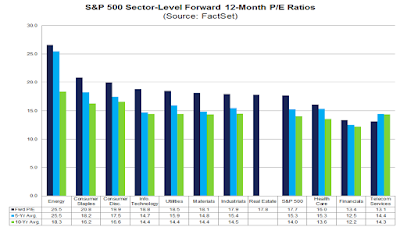 As the chart above indicates, P/E ratios are expected to continue rising in the next 12 months. In other words, the markets are going to get more expensive, relative to underlying earnings. Worse, on a 5-year average basis, all sectors, excluding Financials, are at above x14. Hardly a comfort zone for 'go long' investors. The overvalued nature of the market is clearly confirmed by both forward and trailing P/E ratios over the last 10 years: 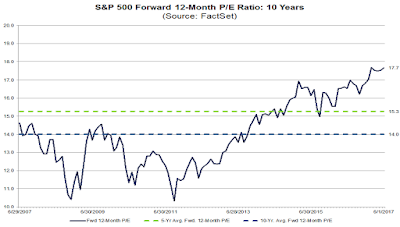 Forward expectations are now literally a run-away train, relative to the past 10 years record (chart above), while trailing (lagged) P/Es are dangerously close to crisis-triggering levels of exuberance (chart below). 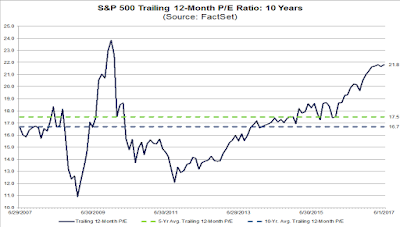 In summary, thus, latest data (through end-of-May) shows continued buildup of risks in the equity markets. At what point the dam will crack is not something I can attempt to answer, but the lake of investors' expectations is now breaching the top, and the spillways aren't doing the trick on abating them.