Not normally my cup of tea, but Valdai Club work is worth following for all Russia watchers, regardless of whether you agree or disagree with Moscow-centric worldview (and  whether you agree or disagree that such worldview even exists). So here is a recent paper on Trump's Administration and the context of the Washington's search for new positioning in the geopolitical environment where asymmetric influence moves by China, Russia and India, as well as by smaller players, e.g. Iran and Saudis, are severely constraining the neo-conservative paradigm of the early 2000s.

Making no comment on the paper and leaving it for you to read:  http://valdaiclub.com/files/14562/. 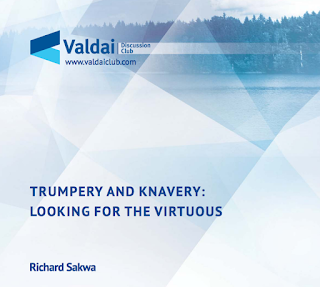